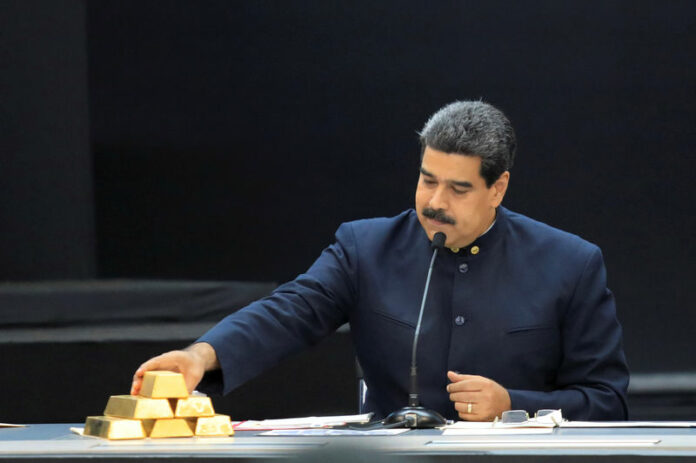 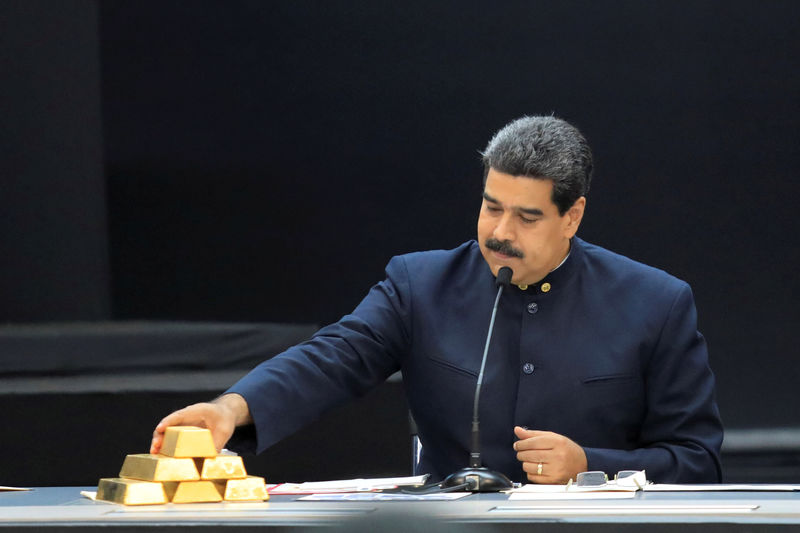 © Reuters. FILE PHOTO: Venezuela’s President Maduro touches a gold bar as he speaks during a meeting with the ministers responsible for the economic sector in Caracas

CARACAS (Reuters) – Two high-ranking Venezuelan officials are traveling to London with plans to meet with the Bank of England over the repatriation of $550 million in gold held in the bank’s coffers, according to two sources with knowledge of the situation.

The government of President Nicolas Maduro is seeking to bring 14 tonnes of gold back to Venezuela because of fears it could be caught up in international sanctions on the country, sources told Reuters this month.

The gold is a crucial asset for the struggling OPEC nation, where hyperinflation is expected to reach 1 million percent this year and a broad economic collapse has fueled an exodus of some 3 million people since 2015.

Maduro’s critics, including exiled opposition leader Julio Borges, have argued that the gold should not be repatriated because it could be used to finance corruption.

Finance Minister Simon Zerpa, who is under sanction by the United States over corruption concerns, and Central Bank Chief Calixto Ortega plan to discuss the issue with Bank of England officials on Friday, said the sources, who asked not to be identified. (https://

British parliamentarian Andrew Lewer has called on the Bank of England not to meet with them due to the U.S. sanctions, according to a letter seen by Reuters that Lewer wrote to the bank and the Chancellor of the Exchequer.

“It is entirely inappropriate for senior officials of the Bank of England to meet with an individual who has been placed on the U.S. sanctions list for reasons of corruption,” reads the letter.

To meet “with such an individual would threaten the reputation of both the Bank of England and the Government as a whole,” Lewer wrote, adding the operation should be approved by Venezuela’s congress, which is dominated by the opposition.

Venezuela’s central bank and finance ministry did not respond to requests for comment.

The Trump administration levied a new round of sanctions a month ago against Venezuela meant to disrupt its gold exports.

But blocking repatriation of Venezuela’s gold would be politically explosive for the Bank of England.

The bank offers gold custodian services to many developing countries, which would likely be concerned that they could be targeted for having adversarial relationships with Washington.

Venezuela for decades stored gold that makes up part of its central bank reserves in foreign bank vaults.

Late socialist leader Hugo Chavez in 2011 repatriated around 160 tonnes of gold from banks in the United States and Europe to the central bank in Caracas to boost control over central bank assets. Some of the gold remained in the Bank of England.

Since the 2014 crash of oil prices, the country’s once-opulent social welfare system has given way to Soviet-style product shortages and a mass exodus of citizens seeking better living conditions in other Latin American countries.

Maduro says the country is victim of an “economic war” led by his political adversaries and fueled by several rounds of sanctions by the European Union and the United States.