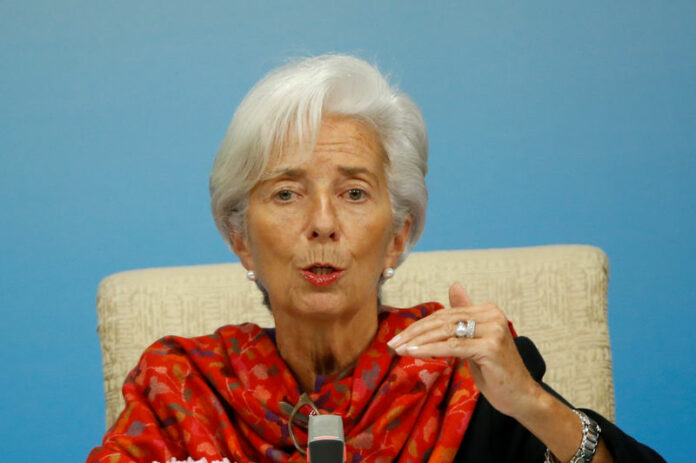 PRETORIA (Reuters) – The International Monetary Fund has not received any request from South Africa for a financial aid program, it’s managing director Christine Lagarde said on Wednesday, as the country struggles with weak economic growth and rising debt.

Africa’s most industrialized economy slipped into recession after contractions in the first two quarters of the year, but bounced back strongly in the third quarter helped by growth in manufacturing, agriculture and retail.

Growth is seen below one percent this year and unemployment stands at near record highs, triggering speculation that South Africa may ask the IMF for financial support.

President Cyril Ramaphosa has pledged to re-start growth after a decade of stagnation under his predecessor Jacob Zuma, but faces an uphill battle to fix struggling state companies that rely on government guarantees and bailouts for survival.

“I am not here to discuss any kind of financial support or to negotiate any kind of program and I have not received any request to that effect,” Lagarde told reporters in Pretoria.

“So that’s crystal clear and I hope it puts to bed some of the rumors or noises that I have seen here or there about this particular matter.”

Commenting on economic developments in neighboring Zimbabwe, IMF’s Africa Department director Abede Aemro Selassie said it would be difficult for the fund to support the country’s reform program as it still had significant outstanding debt.

Abede also said the preconditions for moving forward on a program with Mozambique included clarifying the circumstances around its prior borrowing, as well as ensuring its overall debt position is sustainable, which could include further debt restructuring.

Mozambique admitted in 2016 to $1.4 billion of previously undisclosed loans, prompting the IMF to cut off support and triggering a currency collapse and debt default.