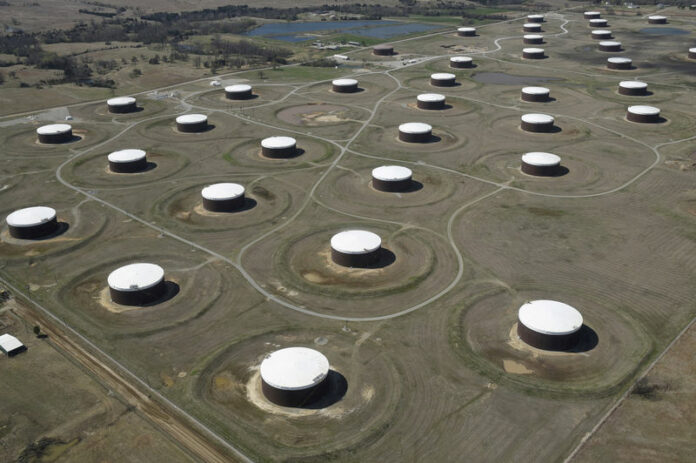 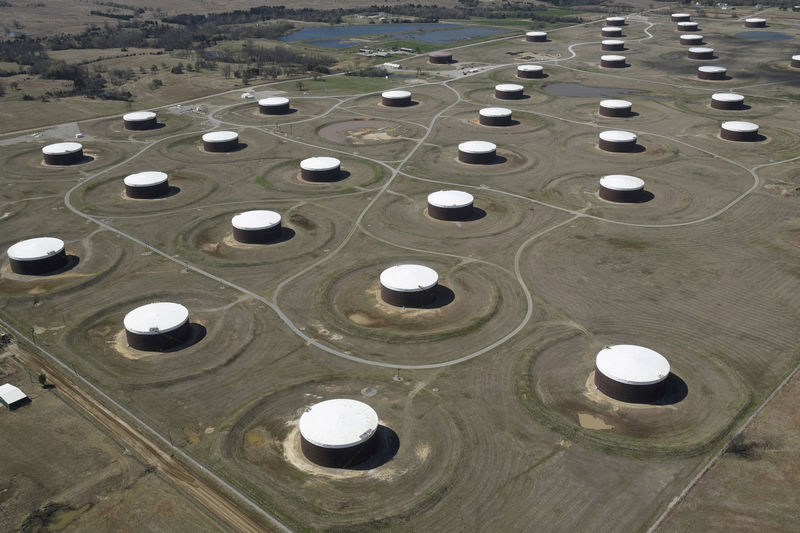 © Reuters. FILE PHOTO: Crude oil storage tanks are seen from above at the Cushing oil hub

NEW YORK (Reuters) – Surging oil production will offset OPEC’s output cuts aimed at rebalancing the market as soon as the end of next year – undercutting the group’s efforts as shale producers ramp up output regardless of the price environment, forecasts show.

U.S. oil production in the most recent week was 11.6 million bpd a day, just off the all-time record of 11.7 million bpd, the U.S. Energy Information Administration said Wednesday. If production expands at the rate that the EIA has forecast, it will effectively eat up OPEC’s cuts by the end of 2019. [EIA/S]

The Organization of the Petroleum Exporting Countries and allies including Russia agreed to sweeping cuts of 1.2 million bpd earlier in December, with non-OPEC allies contributing 400,000 bpd of that reduction.

That is equivalent to the 1.18 million bpd in additional production the United States is expected to add next year, the U.S. Energy Information Administration said last week, due to growth in shale early in 2019 and in several long-awaited offshore projects set to come online late in the year.

Concerns about oversupply have hit oil prices hard in the last two months, with the price of U.S. crude slumping to $46 a barrel on Tuesday from a peak at more than $76 a barrel in October.

With advances in technology including hydraulic fracturing, known as fracking, the United States surged to become the world’s largest crude producer, and output is now expected to exceed 12 million bpd in the next several months.

“Relative to how big this looming supply tsunami is, [the OPEC cut] is not nearly enough to prevent big inventory builds next year,” said Robert McNally, president of Rapidan Energy, a consultancy in Washington, D.C.

It underscores OPEC’s increasing difficulty in keeping a lid on supply to bring prices to a level the cartel sees as acceptable for state budgets. Saudi Arabia’s 2019 budget is set to increase to an all-time high in 2019, but economists estimate its budget is predicated on averaging about $70 a barrel in 2019; it currently trades at $58 a barrel.

“I think this [production cut] is not a once-and-for-all resolution,” said Daniel Yergin, Vice Chairman of IHSMarkit. “This is going to be an ongoing process of a global market coming to terms with continuing growth out of the United States. The global oil market is firmly in the shale era.”

OPEC and its allies cut production by 1.6 million bpd at the end of 2016 in a successful effort to reduce a worldwide supply glut, but during the life of that agreement, U.S. output increased by 1.62 million bpd, shifting market share away from OPEC.

That process could be even swifter this time out – part of the reason why OPEC and other forecasters expect the cuts will only last for a set six months. Saudi Arabia’s energy minister, Khalid al-Falih, said on Wednesday he expected stocks of global oil to fall by the end of the first quarter.

(For a graphic on ‘OPEC’s battle to coax Russia to cut oil output as the U.S. ramps up’ click https://tmsnrt.rs/2PAEgZf)