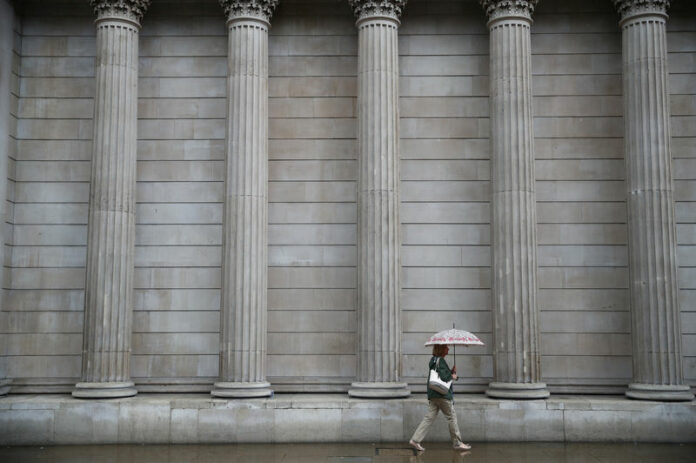 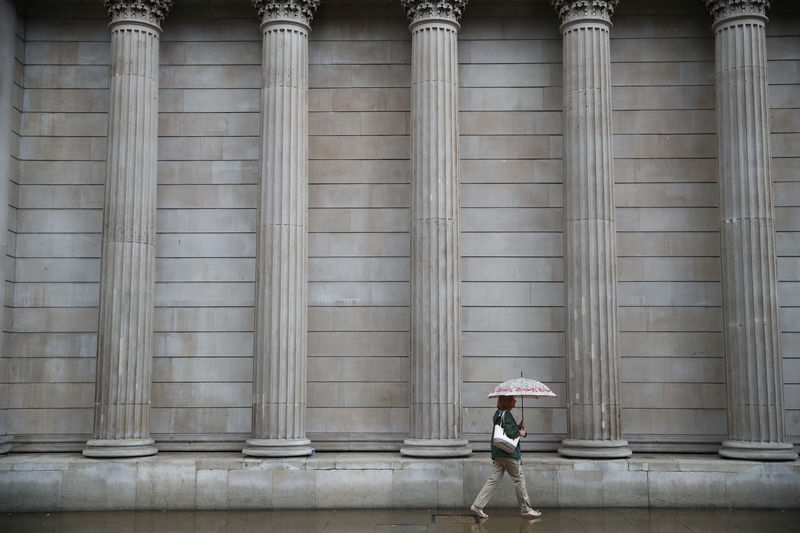 © Reuters. A pedestrian shelters under an umbrella in front of the Bank of England, in London

By Andy Bruce and William Schomberg

LONDON (Reuters) – The Bank of England said on Thursday that Brexit uncertainty had “intensified considerably” over the last month but falling oil prices were likely to push inflation below its 2 percent target soon, helping to support the economy.

All nine of its rate-setters voted to keep them at 0.75 percent as expected.

But there were signs of unease about the turmoil surrounding Britain’s divorce from the European Union.

With less than 100 days to go, Prime Minister Theresa May has yet to win the support of a large section of her Conservative Party for the deal she struck last month with Brussels.

BoE officials trimmed their forecast for British quarterly economic growth in the last three months of 2018 to 0.2 percent from 0.3 percent and said the picture in early 2019 was likely to be similar.

“Brexit uncertainties have intensified considerably since the committee’s last meeting,” the Monetary Policy Committee said in a summary of its December meeting.

“These uncertainties are weighing on UK financial markets.”

A global slowdown was also dragging Britain’s economy and had started sooner than they expected, BoE officials said.

James Smith, an economist with ING bank, said the BoE’s tone had turned more cautious even as it stuck to its position that it expected to resume raising interest rates if Britain could avoid a damaging no-deal Brexit.

“The general message remains largely the same: they would prefer to be tightening sooner rather than later, but Brexit is going to stop them doing that for quite some time,” he said.

BOND PRICES UP, POUND DOWN

British government bond prices drifted slightly higher after Thursday’s decision while the value of the pound edged down against the U.S. dollar.

While the BoE maintained its view that domestically-generated price pressures were building, a drop in prices was likely to push down the headline rate of consumer price inflation to around 1.75 percent in January.

Inflation was likely to remain below target in the following months.

Also potentially helping the economy further out, the BoE said tax and spending measures announced in October by Finance Minister Philip Hammond would provide a modest boost to growth of around 0.3 percentage points over the next few years.

Most economists polled by Reuters do not expect the BoE to raise rates again until after Britain’s scheduled departure from the EU in March. [BOE/INT]

The BoE repeated its view that interest rates could move in either direction after Brexit, depending on Britain’s ability to avoid a potentially damaging no-deal Brexit.

Late last month, the BoE said Britain could suffer a bigger hit to its economy than during the global financial crisis in a worst-case Brexit scenario, something which would normally bolster the case for lower rates.

But the pound — already battered by the 2016 referendum decision to leave the EU — would probably fall sharply again, pushing up inflation which could add to the case for higher borrowing costs.

On Wednesday, the U.S. Federal Reserve raised rates and stuck by a plan to keep withdrawing support from the U.S. economy which it views as strong — further hitting stocks and bond yields as investors feared the Fed risked choking growth in the world’s No.1 economy.