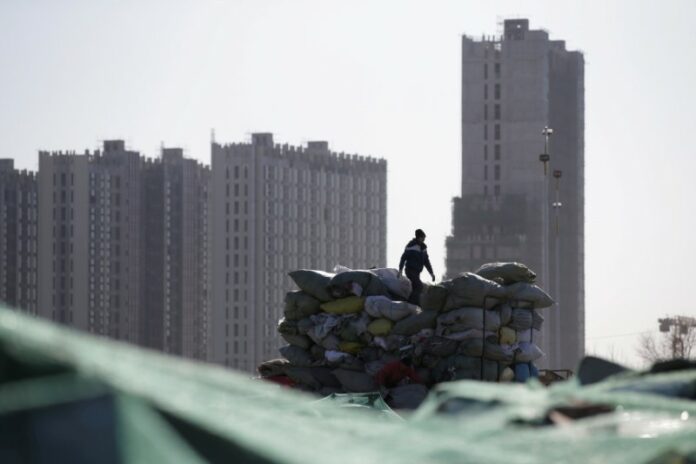 © Reuters. FILE PHOTO: A man works near apartment blocks under construction on the outskirts of Beijing, China

By Kevin Yao and Yawen Chen

BEIJING (Reuters) – China will ratchet up support for the economy in 2019 by cutting taxes and keeping liquidity ample, the official Xinhua news agency said following an annual meeting of top leaders amid a trade dispute with the United States.

The government has launched a raft of measures, including reductions in reserve requirements for banks, tax cuts and more infrastructure spending, to ward off a sharp deceleration in the world’s second-largest economy. Further policy steps are expected.

China will keep next year’s economic growth within “a reasonable range”, the statement said, after the conclusion of the Central Economic Work Conference, a closed-door gathering of party leaders and policymakers.

“The external environment is complex and severe, and the economy is facing downward pressure,” Xinhua said, adding that the government would maintain its proactive fiscal policy and prudent monetary policy next year.

Tang Jianwei, senior economist at Bank of Communications in Shanghai, predicted that local governments would be allowed to issue 1.9 trillion yuan ($275 billion) worth of special bonds in 2019 to fund infrastructure investment, up from 1.35 trillion yuan this year.

“The government will step up policy loosening next year as downward pressure on the economy increases,” Tang said.

Some economists believe more aggressive tax cuts next year could push up the annual budget deficit ratio to 3 percent.

The central bank is likely to deliver more cuts in banks’ reserve requirement ratios, to add to the four reductions this year, but it may not rush to cut benchmark interest rates that could hurt the yuan

On property, the government would stick to the principle of “houses are for living, not for speculation” next year, according to Xinhua.

Reuters reported this week that government advisers had recommended that China lower 2019’s growth target to 6.0-6.5 percent at the annual meeting to map out the coming year’s economic agenda.

The growth target won’t be made public until the opening of the annual parliament meeting in early March.

China’s economic growth slowed to 6.5 percent in the third quarter, the weakest pace since the global financial crisis. Data last week showed surprising softness in November factory output and retail sales, indicating momentum is likely to be reduced further in the current quarter.

The World Bank expects China growth to slow to 6.2 percent in 2019 from an expected 6.5 percent this year, as headwinds increase due to its trade dispute with the United States.

China would implement the consensus reached by Chinese and U.S. leaders in Argentina on trade and push forward their trade negotiations next year, the leaders said.

China and the United States would hold more talks on trade in January, the commerce ministry said on Thursday.