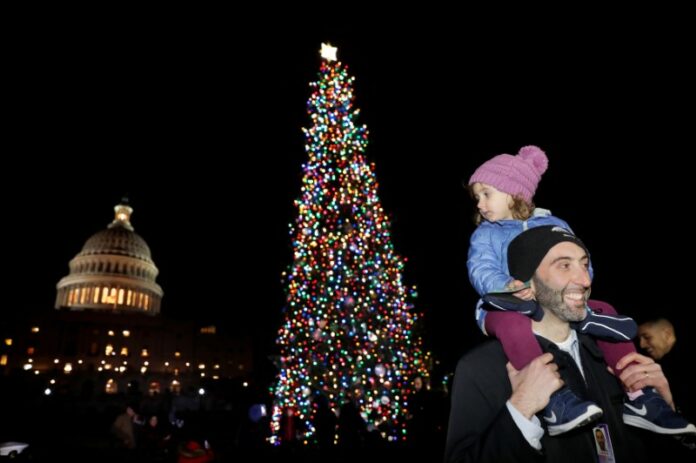 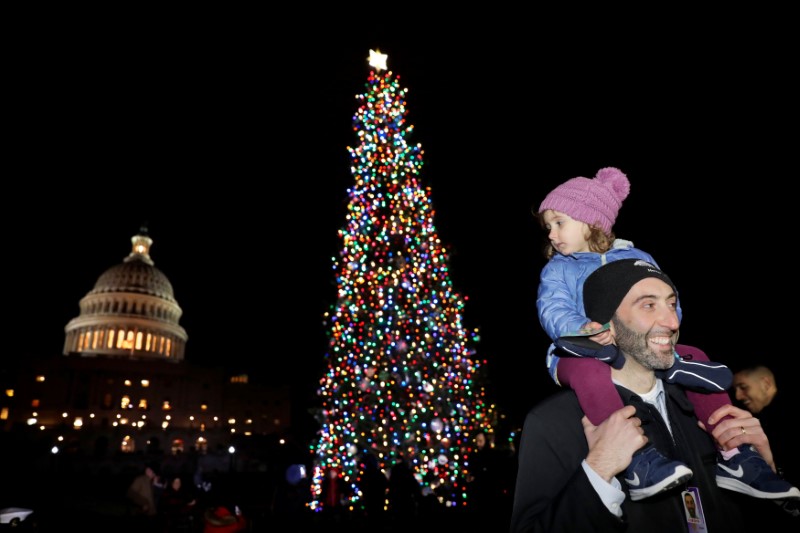 © Reuters. The Capitol Christmas Tree is lit on Capitol Hill

NEW YORK (Reuters) – A record one-third of the U.S. population is expected to take to the nation’s roads, rails and skies for Christmas and New Year’s travel, prompting airports to trot out unusual perks like free ice skating and live reindeer to soothe the stressed crowds.

The American Automobile Association expects 112.5 million Americans, around a third of the U.S. population and about 4 percent more than last year, to travel by car, train and plane from Dec. 22 to Jan. 1.

The expected increase reflects AAA’s inclusion of 11 days in the predicted travel period, rather than last year’s 10 days, as well as a still-solid U.S. economy, said Robert Sinclair, a spokesman for the motorists’ group.

“People have money in their pockets,” he said in an interview. That is despite investor worries that have taken a heavy toll on stocks over the past few weeks.

Gasoline prices have fallen by about 25 cents per gallon in the last month to a national average of $2.36 per gallon, offering some consolation to drivers, who will face delays up to four times the typical travel time in major cities like New York and Atlanta before Christmas.

Rain and wind may cause traffic havoc in the Northeast.

Winds of 20 to 30 miles per hour (32-48 kph) and rain will hit the eastern United States on Friday and Saturday, according to Bob Oravec, lead forecaster at the National Weather Service.

But the skies should clear by the weekend.

“It’s still going to be pretty windy but the heavy precipitation will be winding down, especially in the big cities,” Oravec said.

Vinicius Silva, a Brazilian civil servant on vacation in New York with his family, said he had been stunned by the amount of traffic driving into the city.

Hungry passengers flying through Philadelphia will have a chance to buy “emotional support” chicken nuggets in a poultry- shaped container at the airport’s Popeye’s.