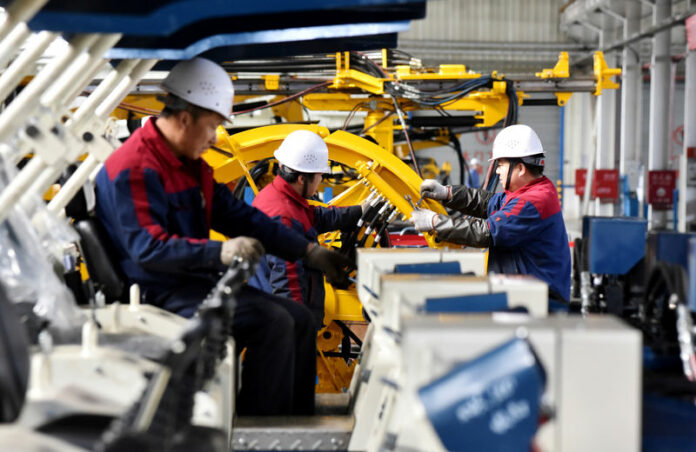 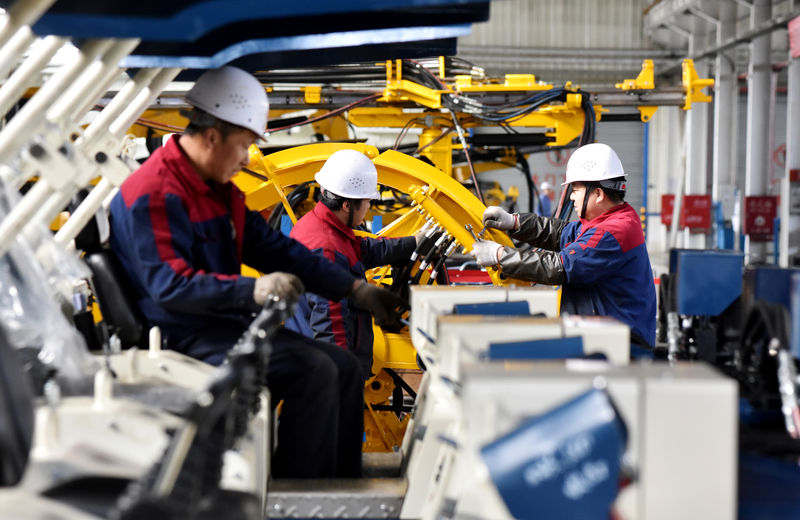 © Reuters. FILE PHOTO: Employees work on a drilling machine production line at a factory in Zhangjiakou

HONG KONG (Reuters) – Factory activity weakened across Asia in December as the Sino-U.S. trade war and a slowdown in Chinese demand hit production in most economies, strengthening the case for a pause in interest rate hikes in the region in 2019.

A series of purchasing managers’ indexes for December released on Wednesday mostly showed declines or slowdowns in manufacturing factory activity across the region. In China, the Caixin/Markit PMI slipped into contraction territory for the first time in 19 months, broadly tracking an official survey released on Monday.

China’s weakness spilled over to other Asian economies, with Malaysia’s manufacturing activity shrinking to its weakest pace of expansion since it launched the survey in 2012 and Taiwan contracting to its lowest since September 2015.

Meanwhile, official economic data out of Singapore showed its gross domestic product grew more slowly than forecast in the fourth quarter as the city-state’s manufacturing sector contracted on a quarterly basis.

In other regions, the euro zone was expected to post steady manufacturing activity growth, while U.S. activity was seen a tad slower, but firmly in expansion territory, in a sign that so far China has suffered more bruises from its trade frictions than the United States.

With growth slowing and inflation below or barely within target in most countries, Asian central banks are unlikely to continue their tightening cycle this year, baring any shocks in currency markets.

“We are really seeing a global slowdown into this year, and in Asia, particularly export-oriented countries are hurting,” said Irene Cheung, Asia strategist at ANZ.

“Our expectation for central banks is that most of them won’t change policy in 2019 and these numbers coming out on the weak side won’t change that outlook.”

The world’s two largest economies agreed at the start of December to a 90-day truce following tit-for-tat tariffs that have disrupted the flow of hundreds of billions of dollars of goods between the two countries.

The two sides have pledged to hold frequent talks in the next two months, but uncertainty over whether they can bridge massive differences over commercial practices and intellectual property rights remains very high, despite U.S. President Donald Trump noting “big progress” in a tweet.

Tariffs are not the only drag on China’s economy. Beijing’s sustained drive to reduce debt risks in the economy has cooled the property market and curbed credit flows to the private sector. Meanwhile, the government’s intensified crackdown on pollution has dented industrial activity.

In a key annual conference last month, China’s top leaders said they will boost support for the economy in 2019 by cutting taxes and keeping liquidity ample, while promising to continue negotiations with Washington.

“The People’s Bank of China may have to ease further to offset the impact of tariffs,” said Robert Michele, chief investment officer and head of fixed income, J.P. Morgan Asset Management.

China’s economic growth slowed to 6.5 percent in the third quarter of last year, the weakest since the global financial crisis. Reuters reported that government advisers had recommended a growth target of 6.0-6.5 percent for this year at the annual meeting, though the final figure won’t be made public until the annual parliament meeting in early March.

For an interactive graphic on Asian rates, click on http://tmsnrt.rs/1U5hc2W

A sharp drop in the crude price () at the end of last year has improved sentiment for Asia’s oil-importing economies, where trade deficits are a key vulnerability.

But Malaysia, which relies heavily on oil revenues, saw its weakest reading ever at 46.8.

Taiwan and South Korea, which are heavily focused on tech production, also saw their activity shrink. The U.S.-China trade war affects chip orders and coincides with a slowdown in demand for smartphones globally.

The contraction in South Korean manufacturing activity continued last month albeit at a slower pace, its PMI showed, with new export orders declining for a fifth consecutive month. Taiwan’s PMI, meanwhile, fell to its lowest since September 2015. Japan publishes PMIs on Jan. 4.

The Southeast Asian economy is widely seen as benefiting from the U.S.-China trade war as companies look to establish operations in the country to avoid the tariff crossfire.