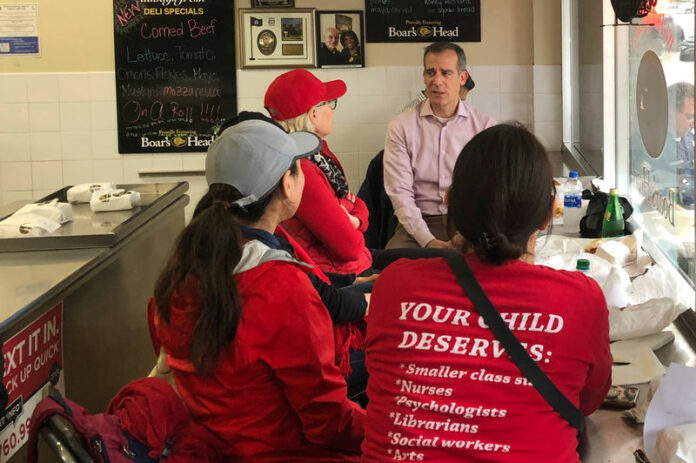 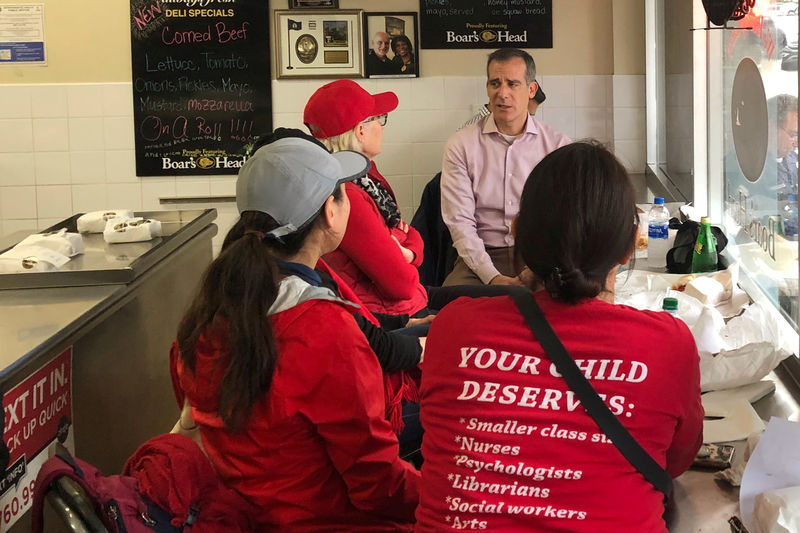 LOS ANGELES (Reuters) – Negotiators for 30,000 striking Los Angeles teachers and America’s second-largest school district returned to the bargaining table on Saturday for a third day of contract talks mediated by the mayor, as educators took a weekend break from picket lines.

Union leaders have said they expected talks to stretch through the three-day holiday weekend. Teachers staging the first strike against the Los Angeles Unified District in 30 years were pressing demands for higher pay, smaller class sizes and expanded support staff.

School district Superintendent Austin Beutner said on Friday he was determined to clinch a deal in time for teachers to return to the job on Tuesday, avoiding a second week of disrupted classes for nearly 500,000 students.

While insisting he shared many of the same goals as the teachers, Beutner also repeated his contention that the district lacked enough funds to fully meet their demands.

The president of the United Teachers Los Angeles union, Alex Caputo-Pearl, has countered that budget constraints have been overblown.

Both men have suggested that sufficient money to close a deal may ultimately have to be found at the state level, and Caputo-Pearl has said he believes Governor Gavin Newsom, a Democrat, may end up playing a key role.

The union staged a mass rally on Friday near City Hall, where tens of thousands of teachers, parents and students in red T-shirts filled a downtown park and surrounding streets.

It was the first day of sunny weather in Los Angeles, after four days of rain that doused teachers on picket lines across the sprawling school district, which had been keeping its 1,200 campuses open on a limited basis with administrators and substitute teachers. The strike started on Monday, and a majority of students have stayed home each day.

At the urging of Mayor Eric Garcetti, the sides resumed negotiations on Thursday for the first time since talks broke off the previous week. They stayed at the table past midnight and returned on Friday but offered no further clues about progress after agreeing to a news blackout.

They returned for a third session on Saturday shortly before 11 a.m. local time, Garcetti’s office said in a statement.

Garcetti lacks direct authority over the school district but is mediating the renewed bargaining. He has described the talks as “productive.”

Several possible contenders for the 2020 Democratic presidential nomination, Garcetti among them, have voiced solidarity with the strike, as have many parents of students at the school district.

Caputo-Pearl has said disagreements over proposals to reduce class size pose the biggest stumbling block to a settlement.