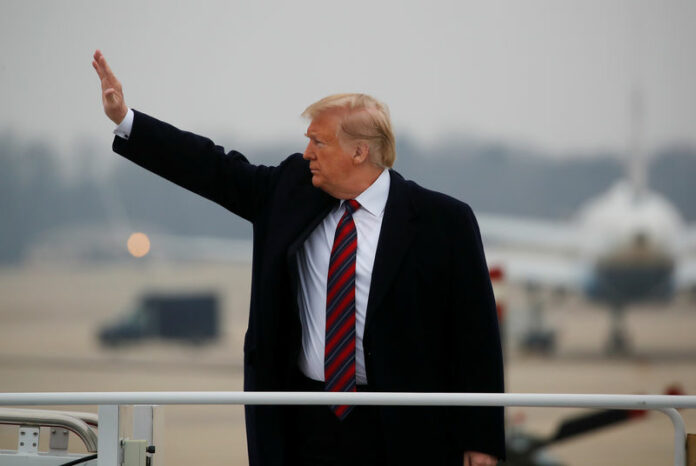 © Reuters. U.S. President Donald Trump boards Air Force One to travel to Dover Air Force Base in Delaware from Joint Base Andrews, Maryland

By Steve Holland and Jan Wolfe

WASHINGTON (Reuters) – President Donald Trump will propose an immigration deal on Saturday in a bid to end a 29-day partial government shutdown, a source familiar with his plans said, but as details emerged Democrats were quick to dismiss it as inadequate.

The president has not budged on his demand that $5.7 billion to fund a U.S.-Mexico border wall be part of any bill to fully reopen the government, an ultimatum Democrats oppose. But Trump is expected to try to pressure Democrats in other areas.

In a speech scheduled for 4 p.m. EST (2100 GMT), Trump will extend support for legislation to protect young undocumented immigrants, known as “Dreamers,” as well as holders of temporary protected status (TPS), the source said, confirming a report by Axios.

A Democratic aide said Democrats were not consulted on the proposal and have previously rejected similar overtures.

“It’s clearly a non-serious product of negotiations amongst [White House] staff to try to clean up messes the president created in the first place,” the aide said. “He’s holding more people hostage for his wall.”

The source familiar with the speech said Trump does not plan to declare a national emergency along the U.S.-Mexico border, a step he threatened to take earlier in his struggle with Congress over the shutdown triggered by his wall-funding demand.

Declaring an emergency would be an attempt by Trump to circumvent Congress and its power over the federal purse strings to pay for his wall. Such a step would likely prompt a swift legal challenge over constitutional powers from Democrats.

As the shutdown passed the four-week mark, making it the longest in U.S. history, about 800,000 federal workers were still at home on furlough or working without pay, a situation that was threatening public services and the economy.

Polls showed Americans increasingly blaming Trump for the shutdown, the 19th to occur since the mid-1970s. Most past shutdowns have been brief. The current one has had no impact on three-quarters of the government, including the Department of Defense, which has secure funding.

Trump told reporters on the White House South Lawn on Saturday that he has no personal feud with House of Representatives Speaker Nancy Pelosi, the top U.S. Democrat.

She and other Democrats oppose Trump’s demand and the wall, calling it too expensive, ineffective and immoral.

“Whether it’s personal or not, it’s not personal for me,” Trump said, adding he was concerned about more immigrants moving north through Mexico toward the U.S. border.

“I’m disappointed that Mexico is not stopping them,” he said. “If we had a wall, we wouldn’t have a problem.”

The Dreamers, mostly young Latinos, are protected from deportation under the Deferred Action for Childhood Arrivals (DACA) program, which protects certain people who illegally entered the United States as children. It provides about 700,000 immigrants with work permits, but no path to citizenship.

Former Democratic President Barack Obama put DACA in place in 2012 through an executive order. The Trump administration announced in September 2017 it would rescind DACA, but the policy remains in effect under a court order.

Axios reported that Trump would throw his support behind the BRIDGE Act, which would provide three years of temporary legal status and work authorization for the Dreamers. The act was first proposed in 2016 by Senator Lindsey Graham, a Republican close to Trump, and Democratic Senator Dick Durbin.

Temporary Protected Status (TPS) is given to nationals from designated countries affected by armed conflict, natural disaster, or other strife. TPS holders are permitted to work and live in the United States for limited times.

The Trump administration has shown a deep skepticism toward the TPS program and has moved to revoke the special status for immigrants from El Salvador, Haiti, Honduras and other nations.