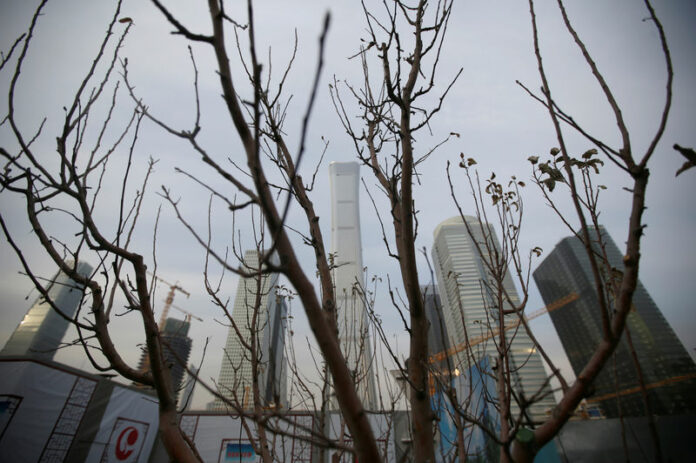 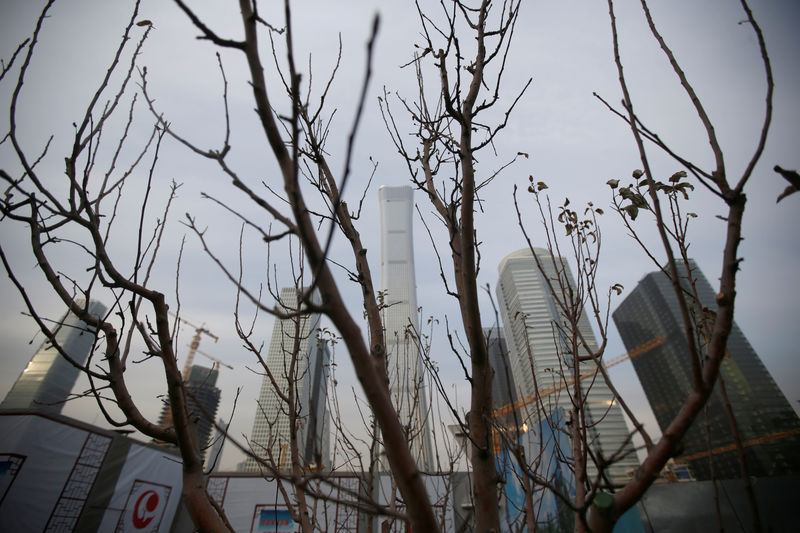 © Reuters. A tree is pictured in front of buildings in Beijing’s central business area

BEIJING (Reuters) – China’s economic growth cooled slightly in the fourth quarter from a year earlier as expected, weighed down by weak investment and faltering consumer confidence as Washington piled on trade pressure, leaving 2018 growth the weakest in 28 years.

Signs of further cooling in China — which has generated nearly a third of global growth in recent years — are stoking worries about risks to the world economy and are weighing on profits for firms ranging from Apple (NASDAQ:) to big carmakers.

Fourth-quarter gross domestic product (GDP) grew at the slowest pace since the global financial crisis, easing to 6.4 percent from 6.5 percent in the third quarter, data from the National Bureau of Statistics showed on Monday. Analysts polled by Reuters had expected 6.4 percent.

That left full-year growth at 6.6 percent, the slowest rate of expansion China has seen since 1990. Analysts polled by Reuters had expected it to cool to 6.6 percent from a revised 6.8 percent in 2017.

Weakening activity and signs of rising unemployment underline a pressing need for more economic support measures as Beijing wrestles with the United States over trade.

Chinese policymakers have pledged more support this year to reduce the risk of a sharper slowdown, but they have ruled out a “flood” of stimulus like Beijing has unleashed in the past, which quickly juiced growth rates but left a mountain of debt.

With support measures expected to take some time to kick in, most analysts believe conditions in China are likely to get worse before they get better, and see a further slowdown to 6.3 percent this year.

On a quarterly basis, growth eased to 1.5 percent inOct-Dec from 1.6 percent in the preceding period. Analysts had expected 1.5 percent.

However, some analysts believe China’s actual growth levels are already much weaker than official data suggest.

December data released along with GDP painted a mixed picture of the economy at the end of the year, with factory output picking up unexpectedly while investment and retail sales continued to languish.

Industrial output grew 5.7 percent in December from a year earlier, beating expectations of 5.3 percent and accelerating from 5.4 percent in November despite markedly weaker exports.

Fixed-asset investment rose 5.9 percent in 2018, missing expectations of a 6.0 percent increase and the slowest annual growth since at least 1996.

Retail sales rose 8.2 percent in December on-year, in line with forecasts. But the pace was only marginally better than November’s 8.1 percent, and it is still hovering near 15-1/2 year lows.

A surprising contraction in December trade data last week and weak factory activity surveys have suggested the economy cooled more quickly than expected at the end of 2018, leaving it on shakier footing at the start of the new year.

Sources have told Reuters that Beijing was planning to lower its growth target to 6-6.5 percent this year from around6.5 percent in 2018.

Even if the two sides agree on a trade deal in current talks, analysts said it would be no panacea for China’s economy unless Beijing can turn around weak investment and credit growth and keep a wobbly property market on its feet.

“There will be more stimulus, they have already announced some of the plans which are in approval stage and will be carried out over the course of the year,” said Christy Tan, Asia head of markets strategy research at National Australia Bank in Singapore.

“It’s still not time to relax on that front and we will see more effort on stimulus this year.”