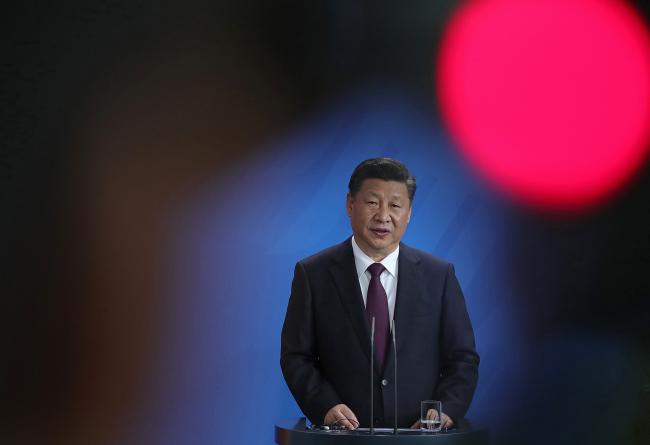 © Bloomberg. Xi Jinping, China’s President, speaks during a news conference with Germany’s Chancellor Angela Merkel (not pictured) at the Chancellery in Berlin, Germany, on Wednesday, July 5, 2017.

(Bloomberg) — President Xi Jinping stressed the need to maintain political stability in an unusual meeting of China’s top leaders — a fresh sign the ruling party is growing concerned about the social implications of the slowing economy.

Xi told a “seminar” of top provincial leaders and ministers in Beijing on Monday that the Communist Party needed greater efforts “to prevent and resolve major risks,” the official Xinhua News Agency said. He said areas of concern facing the leadership ranged from politics and ideology to the economy, environment and external situation.

“The party is facing long-term and complex tests in terms of maintaining long-term rule, reform and opening-up, a market-driven economy, and within the external environment,” Xi said, according to Xinhua. “The party is facing sharp and serious dangers of a slackness in spirit, lack of ability, distance from the people, and being passive and corrupt. This is an overall judgment based on the actual situation.”

Although Xi has issued similar warnings, including in February 2018, Monday’s statements contained signs of greater urgency. The mention of the “serious” threats to the party’s “long-standing rule” appeared new. A full transcript of his remarks to the closed-door gathering wasn’t immediately available.

“Xi is seeing more and more red flashes on his monitor as things on many fronts go wrong,” said Ether Yin, partner at Beijing based consultancy Trivium China. “He wanted to draw the whole system’s attention to that.”

The meeting was held on the same day that China reported its slowest quarterly economic growth since the depths of the global financial crisis in 2009. The data underscored concerns that the decades-long economic expansion that helped the ruling party outlast most other communist regimes may be running out of steam.

Chinese leaders are also coping with a more confrontational U.S. under President Donald Trump, who has slapped tariffs on hundreds of billions worth of dollars of Chinese goods, roiling financial markets around the world. Xi faces added pressure to personally resolve the issues after obtaining a constitutional change that allows him to rule indefinitely.

The meeting appears to have been scheduled recently, since several provincial legislatures rescheduled their annual meetings to accommodate the event. State media offered no advance notice of the gathering.

While Xi has occasionally assembled the party’s more than 200-member Central Committee to “study” pressing issues, this was the first such seminar held without convening a full meeting of the body. A Central Committee meeting known as a plenum was expected late last year — a point in the political cycle when the party usually tackles economic policies — but has yet to be announced.

Communist leaders are facing a year rich with sensitive dates, including the 70th anniversary of the country’s founding on Oct. 1 and the 30th anniversary of the party’s crackdown on democracy activists in Tiananmen Square (NYSE:) on June 4. Such occasions have sometimes helped coalesce criticism of the regime, and China often rounds up dissidents in advance.

“That’s a cocktail that could be explosive as people realize the CCP is no longer delivering the goods on the social contract,” said Dennis Wilder, a professor at Georgetown University and former senior director for Asia on the National Security Council. “The slowdown of the economy to rates not experienced in the reform area is uncharted territory for this generation of leaders of the Communist Party.”