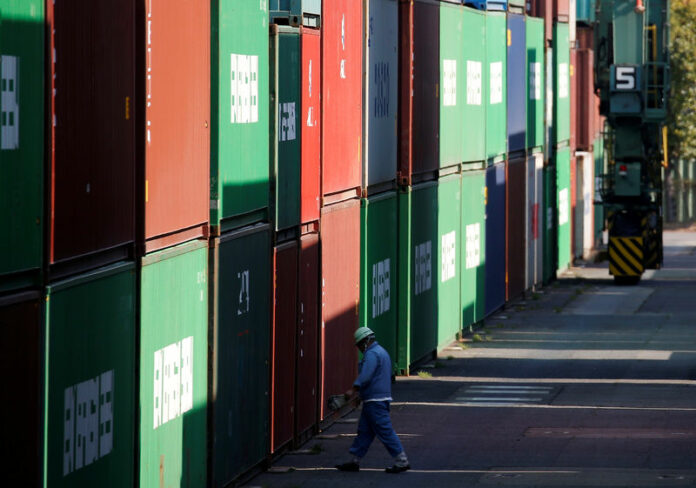 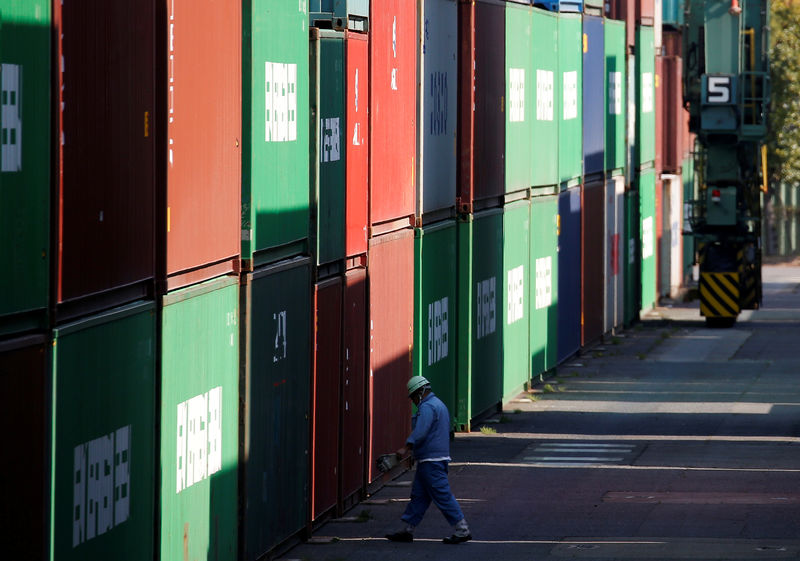 © Reuters. FILE PHOTO: A worker walks between shipping containers at a port in Tokyo

TOKYO (Reuters) – Chances that Japan will slide into a recession this coming fiscal year have grown over the past three months, a Reuters poll of economists found, pressured by a global economic slowdown and U.S.-China trade friction.

Economists said while Japan will probably manage to avoid a recession in the year starting in April, growing 0.8 percent, the outlook is shaky.

That bodes poorly for Prime Minister Shinzo Abe’s plans to raise the sales tax to 10 percent from 8 percent in October to cope with swelling welfare costs as the country’s population ages.

Japan has felt the indirect impact of the U.S.-China trade war because it makes equipment and supplies used by Chinese manufacturers of semiconductors, mobile phones and other products.

The latest data showed Japan’s export growth slowed to a crawl in November as shipments to the United States and China weakened sharply.

“The U.S.-China trade conflict discourages China’s capital spending, which is casting a shadow over Japan’s economy via a slowdown in exports of capital goods,” said Shigeto Nagai, head of Japan economics at Oxford Economics.

U.S. President Donald Trump said on Saturday there has been progress toward a trade deal with China, but denied that he was considering lifting tariffs on Chinese imports.

Uncertainty over Britain’s exit from the European Union adds to the murky outlook, analysts said.

“Uncertainties over the global economy continue such as the outlook of Brexit and impacts from the U.S.-China trade friction on the Japanese economy is materializing, so risks have risen from three months ago,” said Harumi Taguchi, principal economist at IHS Markit.

Twenty-eight of 38 economists said the likelihood of Japan falling into a recession in fiscal 2019 has risen compared with three months ago, the Jan. 9-18 poll showed.

A separate Reuters’ corporate survey showed confidence among Japanese manufacturers dropped for a third straight month in January to a two-year low, as worries over the health of the global economy and trade tensions take a toll businesses.

Abe has twice postponed the tax hike out of economic concerns, but 27 of 39 economists said there was at least an 80 percent chance he will go ahead with it.

Abe has said barring a repeat of the 2008 global financial crisis, he’ll raise the sales tax. He is due to make a final decision soon.

To blunt any economic damage from the hike, the government plans to offer tax breaks on cars and homes and exempt some products from the tax hike.

Japan’s economy will contract a sharp 3 percent during the October-December quarter, when the tax will be raised, economists project. For the entire fiscal year, it will expand 0.8 percent, the poll showed, and then slow slightly to 0.6 percent growth for the following fiscal year.

“At least from an economic point of view, the proposed set of policy measures will compensate for the near-term impact of the sales tax hike,” said Tetsuya Inoue, chief researcher at Nomura Research Institute.

The nationwide core consumer price index (CPI), which excludes the effect of volatile fresh food costs, is seen rising only 0.6 percent for fiscal 2019 excluding the effects of the tax increase, after a 0.8 percent growth projected for the current year to March, the poll found.

The Bank of Japan is expected to cut its inflation forecasts at its Jan 22-23 meeting, sources told Reuters, a sign slumping oil prices and a darkening global economic outlook are heightening challenges for hitting its ambitious 2 percent target.

The central bank will likely lower its forecast for core consumer inflation to around 1 percent in the fiscal year beginning in April from 1.4 percent, sources told Reuters.

Many economists say the BOJ will start normalizing its super-ultra monetary policy for its next move and the central bank’s steps could include expanding its 10-year Japanese government bond yield fluctuation from 0.2 percent and raising the 10-year JGB yield target from “around zero” percent, the poll showed.

Only a handful economists expect that would happen within this year but a majority forecast it would be in 2020 or later.