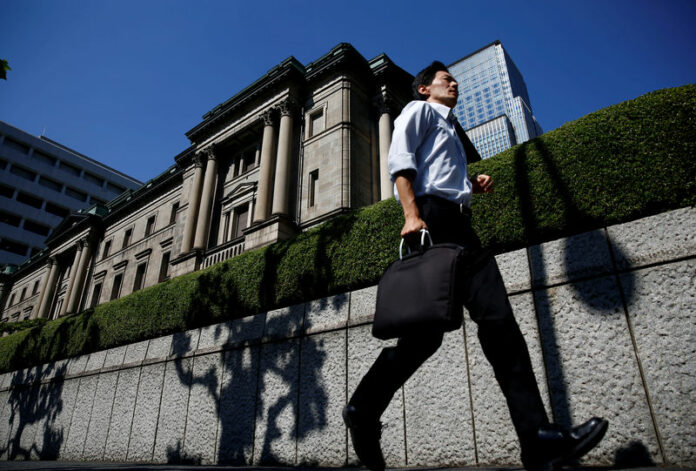 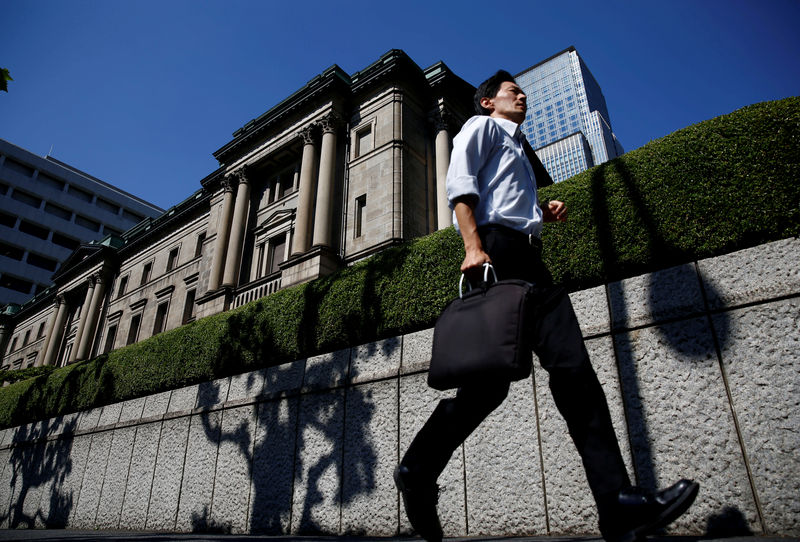 © Reuters. FILE PHOTO: A man runs past the Bank of Japan (BOJ) building in Tokyo

TOKYO (Reuters) – The Bank of Japan is set to cut its inflation forecasts and maintain its ultra-loose monetary policy on Wednesday, as pressure on the economy mounts in the face of slowing global demand, dealing another blow to its years-long efforts to foster durable growth.

The deteriorating global outlook also means the BOJ is some way off from exiting a sweeping stimulus program begun in 2013, which policymakers have acknowledged will do more harm than good the longer it is retained.

Sources have told Reuters the central bank will maintain its view that Japan’s economy, the world’s third largest, will continue to expand at a modest pace. Yet, the rising pressure on global growth from a trade war between the United States and China – Japan’s biggest trading partners – has many analysts wary about the outlook.

A Reuters poll of economists showed those external factors have increased the chances of Japan sliding into a recession this coming fiscal year starting in April, making it ever so harder for the BOJ to reach its 2 percent inflation target.

“Governor (Haruhiko) Kuroda will likely vow to keep current easing while analyzing costs and effects of such policy. He may even voice readiness for further easing. He needs to wait until global uncertainties fade before laying the ground for policy normalization.”

At its policy-setting meeting ending on Wednesday, the BOJ is widely expected to keep its short-term interest rate target at minus 0.1 percent and a pledge to guide 10-year government bond yields around zero percent.

With stubbornly weak inflation forcing it to retain its massive stimulus longer than expected, the BOJ took steps in July to make some changes to its policy framework, such as allowing bond yields to move more flexibly around its target.

On Wednesday, the BOJ’s nine-member board will issue a quarterly report analyzing Japan’s economy including fresh growth and inflation projections through the fiscal year ending in March 2021.

The central bank is likely to largely keep its economic growth projections, with lower energy costs and government spending set to ease the pain of the planned tax hike in October, the sources said.

The BOJ is expected to cut its forecast for core consumer inflation to around 1 percent in the fiscal year beginning in April from 1.4 percent, reflecting slumping oil prices and the potential fallout from slowing global growth, the sources said. It would be the fourth downward revision by the central bank to its inflation forecast for fiscal 2019 since it was first estimated in April 2017.

That would still beat a 0.7 percent forecast by analysts polled by Reuters.

The central bank will also likely trim core consumer inflation slightly from 1.5 percent, seen under the current forecasts made in October, in the following financial year.

Many economists in the poll say the BOJ’s next move is to start normalizing policy, with its steps likely including expanding its 10-year bond yield fluctuation from 0.2 percent and raising the 10-year yield target from around zero percent.

A majority expect that would happen in 2020 or later.

The BOJ’s radical stimulus program has had some unintended consequences, as years of low rates hurt financial institutions’ profits.

Many BOJ policymakers are wary of ramping up stimulus, though external shocks or a sudden spike in the yen could force the central bank to do just that if the economy is at risk of sliding into recession.