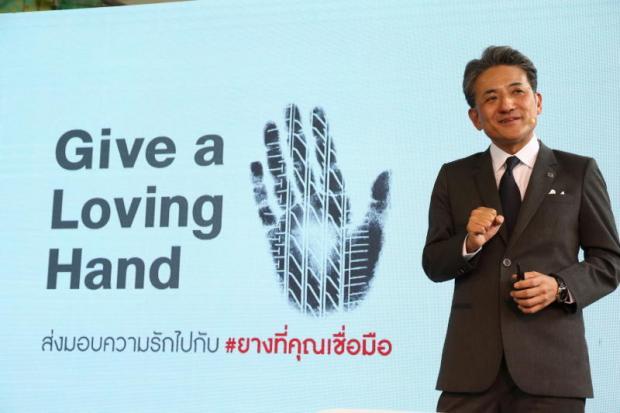 Thai Bridgestone is upbeat on sales revenue in Thailand, aiming for 5.4% growth in 2019, as the country’s car output and replacement market are both likely to see upward movement.

The local unit of the Japanese tyre producer did not specify 2019 revenue goals.

Managing director Hideyuki Takeda said he expects the economy to grow by 4.3% in 2019, based on a projection by the central bank.

Of total production, 1.15 million units would be exported, up 4.6% year-on-year, while the remaining 1.05 million will serve the local market, reflecting 5% growth.

“With these economic and automotive figures, Bridgestone is confident about the growth of sales revenue this year,” Mr Takeda said.

The Office of Industrial Economics (OIE) reports that the country’s vehicle tyre output stood at 35.02 million units in 2018, edging up 0.5%.

Of the output, 23.2 million tyres were made for the local market in 2018, down 2.1%, and the OIE said the replacement market dropped slightly.

Tokyo-based Bridgestone entered Thailand in 1967 and began tyre production in 1969.

The company operates two plants — one in Rangsit, Pathum Thani and one in Nong Khae, Saraburi — with a combined production capacity of 47,000 tyres a day.

Bridgestone buys 120,000 tonnes of block and sheet rubber from Thai farmers a year.

In Thailand, the company employs 10,439 in tyre production, exports and domestic sales.

Bridgestone aims to expand its retail network by a further 20-30 points in 2019, mainly focusing on passenger cars and pickups, while the network for commercial vehicles will be located in border provinces that connect to Malaysia and Laos.

In addition, Bridgestone announced the construction of two new manufacturing plants in Thailand for aircraft tyres at an investment of ¥15 billion (4.61 billion baht).

The two projects, one each in Rayong and Chon Buri, were also awarded investment incentives by the Board of Investment for a combined expansion amounting to 109,000 tyres a year.

Mr Takeda said the two plants are expected to start operations in 2020.