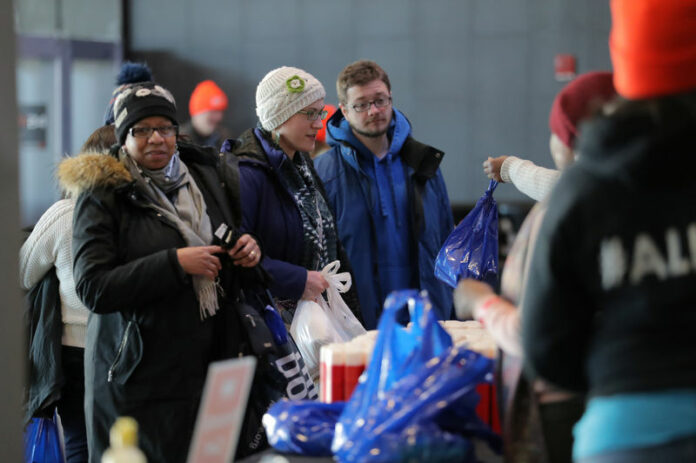 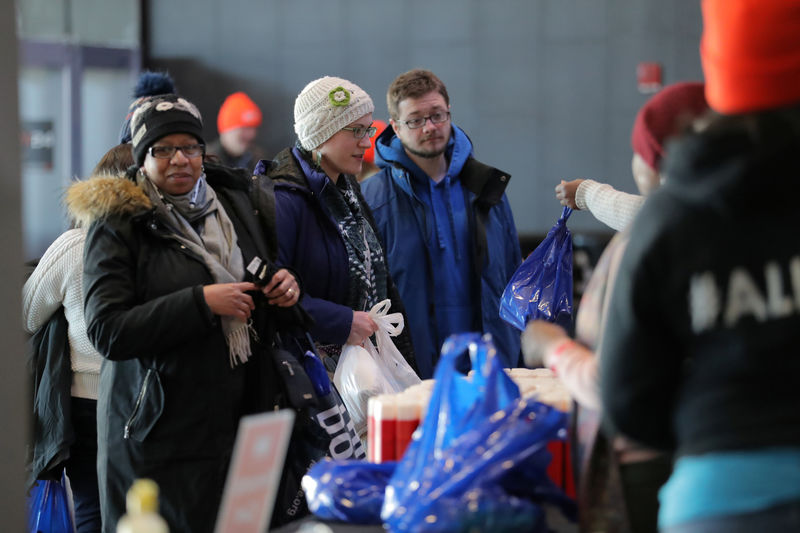 © Reuters. Government employees receive donations at a food distribution center for federal workers impacted by the government shutdown, at the Barclays Center in the Brooklyn borough of New York

WASHINGTON (Reuters) – A partial shutdown of the U.S. government, which enters its second month on Wednesday, has delayed the publication of key economic data, leaving investors and businesses to follow their intuition and gut instincts as they make critical decisions.

The shutdown, which affects about a quarter of the federal government, started on Dec. 22 amid demands by President Donald Trump that Congress give him $5.7 billion this year to help build a wall on the country’s border with Mexico. The shutdown is now the longest in U.S. history.

Among agencies affected is the Commerce Department, leading to the suspension of the publication of data compiled by its Bureau of Economic Analysis (BEA) and the Census Bureau. The Labor Department has not been affected and its Bureau of Labor Statistics (BLS) continues to publish data, including the closely watched monthly employment report.

Data gathered by non-governmental organizations such as the U.S. Federal Reserve and Conference Board also continue to be published.

WHAT REPORTS HAVE BEEN AFFECTED?

The first casualties were November’s new-home sales, advance trade, wholesale and retail inventories reports, which were scheduled for release in the last week of December. Publication of these reports for December is also likely to be delayed.

Also postponed was November’s construction report detailing the value of construction work on new structures or improvements to existing structures for private and public sectors. Trade data for November was also delayed.

November business inventory data as well as the factory orders report has been delayed. December’s retail sales, housing starts and building permits data have also not been released. It is unlikely that December durable goods orders, personal income and consumer spending reports will be published.

These reports constitute the source data for calculating U.S. gross domestic product, the main measure of economic output. The advance fourth-quarter GDP report, scheduled for release on Jan. 30, will likely be delayed even if parts of the government hit by the lapse reopen this week.

WHAT ARE THE IMPLICATIONS?

Businesses including manufacturers, farmers, retailers, builders and others rely on these reports in making decisions on capital spending, production and managing inventory among other activities. Government and private economists count on them to assemble a full picture of the health of the U.S. economy, and financial market participants need them to guide asset allocation decisions.

According to Robert Shapiro, a former under secretary of commerce for economic affairs in the Clinton administration, the shutdown has put all surveys on hold. Shapiro, who oversaw the data releases, said it will take time to catch up.

“GDP is the only standard gauge we have of the pace and direction of the overall economy and its major components, and the measures that comprise it help shape long-term business and financial planning and short-term investment algorithms,” said Shapiro, now a senior fellow at Georgetown McDonough School of Business in Washington.

Meanwhile, several Fed officials have voiced concerns about having to make monetary policy decisions without key information, including the bank’s preferred measure of inflation. Having “good data is how we make our decisions,” New York Fed President John Williams (NYSE:) said last Friday.

The shutdown, which has left about 800,000 federal employees without pay and private contractors working for many government agencies without wages, is causing uncertainty and anxiety, leading to a retrenchment in consumer and business confidence.

Consumer sentiment tumbled to a more than two-year low in January, and the New York Fed’s business conditions survey weakened sharply this month.

WHAT ABOUT JANUARY’S EMPLOYMENT REPORT?

The lapse in funding for the Census Bureau will not affect the January employment report, even though BLS uses Census data for the household survey portion of the report from which the unemployment rate is calculated.

The collection of data for the household survey is mostly funded by the BLS, and “at this time, is not affected by the lapse of appropriation,” it said.

Some employment-related figures from Census will not be available, however, including granular data used to round out the full picture of the job market, labor force and wage growth.

The Consumer Price Index data also will be published as scheduled. The BLS, however, said its productivity and costs report for the fourth quarter due on Feb. 6 will not be published in full if the GDP report is unavailable because it is the source data for some of that report’s measures.

WHAT COULD HAPPEN WHEN THE SHUTDOWN ENDS?

Looking back to what happened after the October 2013 government shutdown, the BEA and Census will probably publish a fresh schedule for the delayed data, and some delayed reports could be released at the same time as current data. For example, December housing starts could be published simultaneously with the January report.

Some data covering November, including new-home sales, construction spending, factory orders, advance trade, wholesale and business inventories could be released within days of a government restart, but it could take a while to publish the December data.

“There may be data which was collected for November, there may be some data collected before the shutdown, but we don’t know how much,” said Shapiro. “As for December, they would have to begin to collect the data for December. They are going to be out for some time, they will try to release them eventually.”