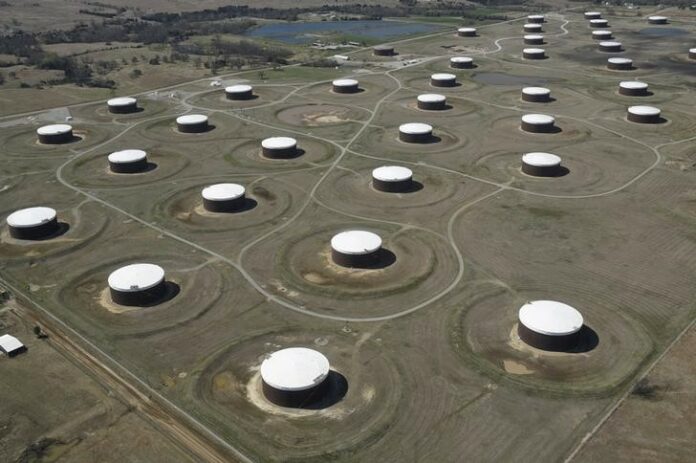 © Reuters. Crude oil storage tanks are seen from above at the Cushing oil hub in Oklahoma

LONDON (Reuters) – Oil prices rose almost 1 percent on Wednesday on hopes that Japan and China would take fiscal stimulus measures to stem an economic slowdown which has weighed on financial markets.

Oil prices fell by 2 percent on Tuesday as financial markets reeled from concerns about a global economic slowdown and the heavy losses spooked investors into safe-haven assets such as government bonds or gold.

A widespread economic slowdown is expected to dent growth in demand for fuel, weighing on energy prices.

But some optimism emerged as China and Japan said they would use fiscal spending to boost growth.

Chinese finance ministry officials said on Wednesday the government would step up fiscal spending this year to support its economy, which last year registered its lowest growth rate since 1990.

The Bank of Japan said it would keep its ultra-easy monetary settings which have been running since 2013.

Steen Jakobsen, chief economist at Denmark’s Saxo Bank, said “the global economy is suffering”, but added that China’s government would “do all it can for stability”.

Should a U.S.-China trade deal to resolve the two superpowers’ trade tensions be reached promptly, Jakobsen said, “we will see powerful support for the Chinese economy”.

Providing oil prices with support in 2019 have been production cuts led by the Organization of the Petroleum Exporting Countries (OPEC), aimed at reining in an emerging supply overhang.

Whether OPEC’s efforts will be successful will also depend on the development of oil production in the United States, where crude output jumped by 2 million bpd in 2018 to an unprecedented 11.9 million bpd.

While the U.S. Energy Information Administration (EIA) said on Tuesday that it expected shale output to rise further, it said that production growth would slow in the coming years.