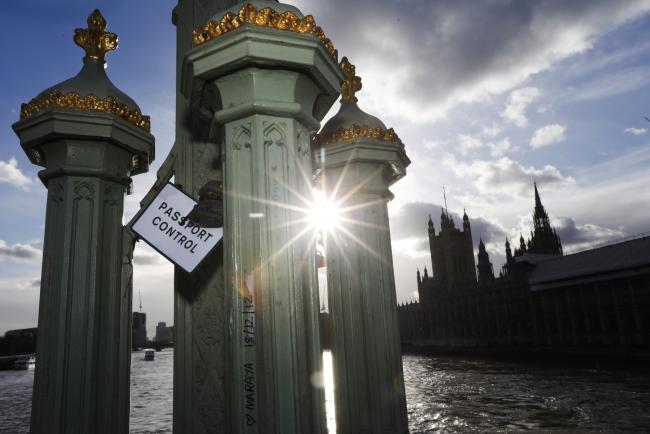 Postponing Brexit Is Worse for U.K. Economy Than May’s Deal

© Bloomberg. A sign reading ‘Passport Control’ hangs from padlocks attached to Westminster Bridge as the Houses of Parliament stands on the bank of the River Thames in London, U.K., on Tuesday, Jan. 22, 2019. The U.K.’s main opposition party is backing a plan that could open the door to a second European Union referendum, bringing the possibility of stopping Brexit a step closer. Photographer: Luke MacGregor/Bloomberg

(Bloomberg) — The prospect of a delayed Brexit may be pushing up the pound, but it’s not the best news for the U.K. economy.

Sterling has rallied above $1.30 this week amid increasing signs of support from lawmakers across Parliament for extending the negotiating period set to expire on March 29. While that would remove the imminent possibility of a chaotic no-deal scenario, it would leave the U.K. worse off than if Parliament accepted Prime Minister Theresa May’s current plan, according to economists.

Pushing back the departure prolongs the uncertainty that has already hit business investment and pushed consumer confidence to the lowest since 2013, according to JPMorgan (NYSE:) Asset Management. Worse still, it would be unlikely to help the government reach any better outcome.

“Kicking the can down the road has a cost,” said JPMorgan AM global market strategist Mike Bell. “Time has a cost, dragging on growth.”

For Dan Hanson at Bloomberg Economics, it’s a question of how long the delay lasts. His uncertainty model suggests a three-month postponement could slow growth to 1.5 percent this year from his central projection of 1.7 percent — which is based on some form of Brexit agreement being reached with the EU in time for a March departure. But six months would crimp it to 1.3 percent.

Beyond that time period, he sees a less clear impact as the cliff edge disappears from the view of businesses and households, potentially lifting some of the paralysis.

Still, the economic hit from a delay is likely to be far smaller than the disruption caused by a no deal — helping to explain the pound’s recent strengthening. Last year, the Bank of England’s worst-case scenario saw the economy shrinking by 8 percent within a year, property prices plunging almost a third and the pound losing a quarter of its value.

BOE Governor Mark Carney may discuss Brexit when he speaks on two panels at the World Economic Forum in Davos, Switzerland on Thursday.

Most economists still see a no-deal Brexit as unlikely. The Centre for Economics and Business Research puts only a 10 percent probability on that outcome.

On Wednesday, May faced repeated questions in the House of Commons over whether she should extend the exit process known as Article 50 and delay Brexit beyond March. She remains against the idea, but her answers didn’t close the door on it.

“Extending Article 50 I don’t believe resolves any issues,” May said. Parliament will still need to decide if it wants a deal, a no-deal Brexit, or no Brexit, she added.

That final option — stopping the process altogether — is still possible, according to a European Court of Justice ruling in December which confirmed that the U.K. has the right to unilaterally revoke Article 50, although lawmakers have so far been loathe to discuss overriding the outcome of the 2016 referendum.

It’s the hardest outcome to assess, according to Hanson, as the likely weak start to this year will continue to weigh on the annual figure in any scenario. The most he can see the 2019 economic growth rate picking up is to 2 percent.

Some of the damage to the U.K. from the Brexit referendum won’t be reversible. The biggest banks looking to serve continental European customers intend to move 750 billion euros ($855 billion) of balance-sheet assets to Frankfurt.