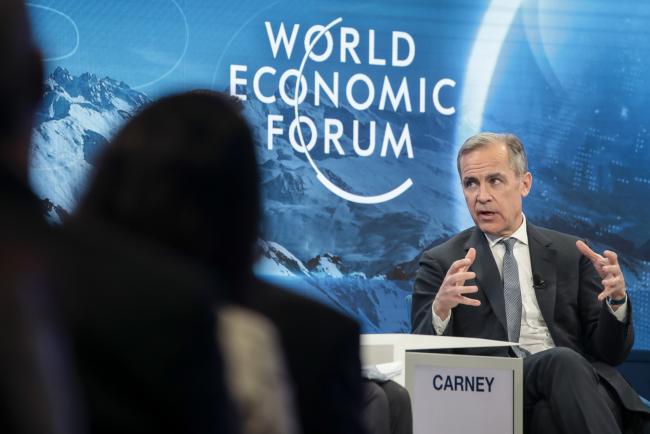 © Bloomberg. Mark Carney speaks during a panel session in Davos on Jan. 24.

(Bloomberg) — U.K. businesses can’t fully prepare for the chaos of a no-deal Brexit, according to Bank of England Governor Mark Carney.

“There are a series of logistical issues that need to be solved, and it’s quite transparent that in many cases they’re not,” Carney said Thursday at the World Economic Forum in Davos, Switzerland. “There is a limited amount that many businesses can do to prepare if there are going to be substantial delays on the logistical side.”

While the risk of Britain leaving the European Union without a transition agreement may now be receding amid calls for a delay, there is still an impasse in Parliament that means the nation could yet crash out on March 29. Carney noted that business preparations under way can only go so far.

“If you’re a car plant that relies on, and there are ones in the U.K., that rely on 40 18-wheelers coming through Dover a day, and they have to show up within minutes of each other in order to meet the just-in-time requirements of the plant, look, you can’t stack things up all over Wales in order to ensure that you can continue to run it for months. That’s just a reality.”

Carney’s comments came on the day Airbus SE said it could be forced to move future investments out of the U.K. in case of a no-deal divorce from the EU, slamming the “madness” of Brexit supporters who assume the planemaker won’t abandon Britain.

Read the latest on the U.K.’s plans quit the EU in our Brexit Update

He reiterated that the BOE has been preparing for Brexit since 2016, and has ensured the U.K. financial system is ready for any outcome. He also repeated that the central bank’s policy response to a no-deal Brexit wouldn’t be automatic — a hit to supply could push up prices and force it to hike rather than cut interest rates.

When the audience was asked to vote on whether the U.K. should have a second referendum, the Governor abstained, as did IMF Managing Director Christine Lagarde and most of the rest of the panel. Sergio Ermotti, chief executive officer of UBS, raised his hand in support of a re-run.