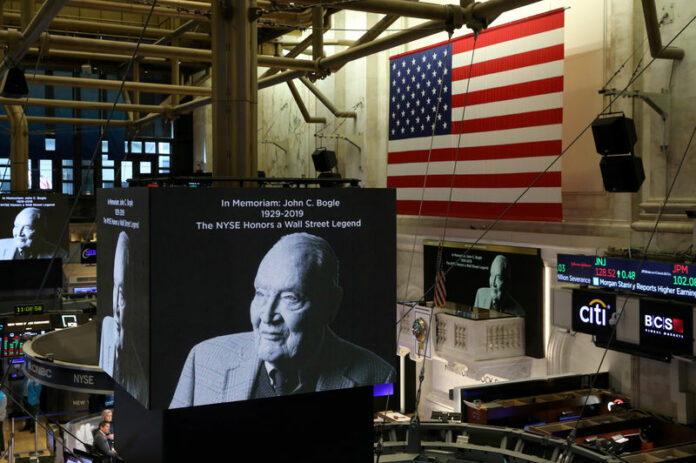 How to finish Jack Bogle’s revolution in saving for retirement 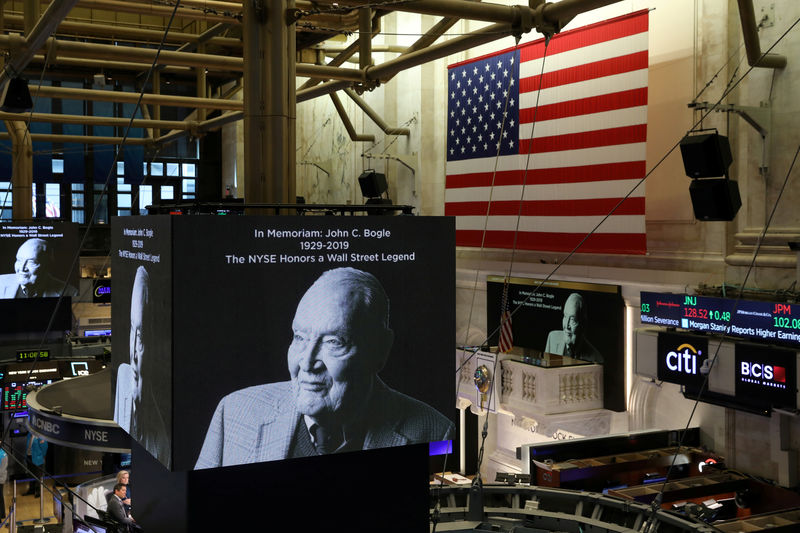 © Reuters. FILE PHOTO: Screens display a tribute to Jack Bogle, founder and retired CEO of The Vanguard Group, on the floor of the NYSE in New York

CHICAGO (Reuters) – Jack Bogle did more to help the average American working household save for retirement than anyone else in the modern era of investing.

When Bogle died last week at age 89, Vanguard Group – the company he founded in 1974 – was putting about $21.1 billion annually into investor retirement accounts that otherwise would be lining the pockets of Wall Street as fee income.

And $21.1 billion is a conservative estimate. It is a Vanguard calculation, based on Morningstar data, of the amount investors saved on its ultra-low cost mutual funds, exchange-traded funds and money market funds compared with the rest of the industry. It does not even begin to measure the lower fees being paid by customers of other firms that were dragged kicking and screaming into Bogle’s revolution, which preached the virtues of investing in low-cost passive index funds that tracked markets instead of trying to beat them.

Some observers think the real annual amount of investor savings delivered by Bogle is closer to $100 billion.

Whatever the correct figure, the death of John “Jack” Bogle leaves me with this question: how do we finish the job he started? How do we create a square deal for American workers when it comes to retirement planning? By square deal, I mean a suite of high-quality, low-cost retirement products and advisory services, enveloped by tough regulation that protects average households from financial exploitation.

Plenty of work remains to be done.

For starters, that $21.1 billion figure should remind us that millions of investors still pay far too much to invest for retirement. Morningstar reported recently that U.S. investors plowed $460 billion into passive index mutual funds and ETFs last year, while withdrawing $300 billion from actively managed funds. Total assets under management are on track to outpace active funds by the end of the year.

But small, less-sophisticated investors have no business being in high-cost actively managed mutual funds. Any given fund might beat the market for a year or two, but almost none stay on top over the long haul. For example, S&P Jones Indices reported recently that just 7 percent of domestic equity funds that were in the top quartile of performance in September 2016 were still there two years later.

But the need for a square deal goes further than funds.

Another huge remaining challenge is bringing down the cost of retirement planning advice, and extending it beyond affluent households to middle-class households. Numerous studies have demonstrated retirement advice produces better asset allocation, higher saving and less exposure to risk.

Low-cost passive funds have made room to add a layer of fees and still keep overall costs at a reasonable level. The most promising advisory ventures use software, or a blend of automation and human advice. These digital-driven solutions are growing quickly – consulting and research firm Cerulli Associates projects that assets under management in the United States will jump from an estimated $295 billion last year to just over $1 trillion in 2023.

Vanguard already is one of the largest players in this space. The company’s Personal Advisor Services provides access to a managed portfolio of Vanguard index funds and exchange-traded funds, along with portfolio management services from a human adviser, charging 30 basis points. Since its launch in 2015, the service has nearly quadrupled in size, finishing 2018 with $115 billion in assets under management.

Of course, the right kind of advice is necessary, and this is the other great unfinished business in creating a more square-deal environment that helps the middle class prepare for retirement. Most of these households would be surprised to learn that when they hire a brokerage firm to make a retirement plan, the “adviser” need not put the client’s best interest ahead of their own – the so-called fiduciary standard.

The Obama-era Department of Labor promulgated a rule that would have required brokers to adhere to a fiduciary standard, but it was opposed by the financial services and insurance industries, and the Trump administration allowed it to lapse.

The U.S. Securities and Exchange Commission is moving toward adoption of a so-called regulation best interest standard. The SEC rule would require brokers to put their customers’ financial interests ahead of their own, but it does not require them to act as fiduciaries. The rule also would require disclosures to clients of any potential conflicts, and it reaffirms existing higher standards for registered investment advisers.

The draft regulation has come under fire from consumer advocates who note it does not clearly define the term “best interest” and that the proposed disclosure forms are confusing for investors. The SEC is expected to release a final rule in the second half of this year.

Meanwhile, New York, Nevada and New Jersey, worried about the lapsed state of federal fiduciary regulation, are moving toward adoption of their own fiduciary standards.

Bogle was a passionate advocate of a strong fiduciary standard to protect investors from conflicts of interest and high fees. That should be no surprise, coming from a visionary who got the rest of us to understand the paramount importance of cost, the folly of market timing, and owning the entire stock market via passive index funds.

A square deal for all on retirement advice? There could be no better lasting tribute to Jack Bogle.

(Reporting and writing by Mark Miller in Chicago; Editing by Matthew Lewis)