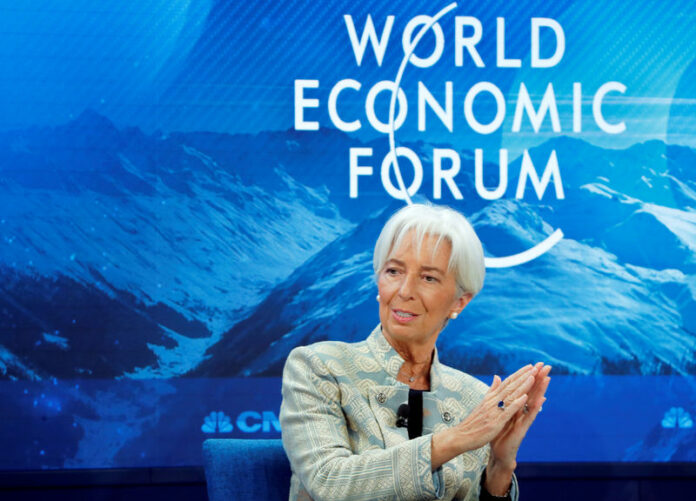 By Leika Kihara and Alessandra Galloni

DAVOS, Switzerland (Reuters) – International Monetary Fund chief Christine Lagarde on Thursday warned countries against relying too much on monetary policy to counter another economic downturn, urging them to undertake fiscal and structural reforms to boost their economies’ resilience to shocks.

The Fed was among the few central banks that has “a little bit” of policy space left to expand stimulus, she said.

“It would be very nice if the economies at large didn’t have to rely on central banks yet again in order to resist the next shock,” Lagarde told delegates at the World Economic Forum in the Swiss ski resort of Davos.

Simmering trade frictions and fears of a global economic slowdown have jolted financial markets and forced major central banks to pause in their efforts to whittle down crisis-mode stimulus programs.

Fed Chairman Jerome Powell recently signaled he would go slow in raising rates and stressed that his central bank’s next policy move will depend greatly on upcoming economic data.

Being data-dependent in guiding policy – for example by focusing on jobs and inflation numbers – is a key principle Powell has applied, “which certainly we very, very strongly support,” Lagarde said.

“If he has slightly changed his tone during his latest communication, that’s probably because he’s seeing data … that will actually lead him to change slightly, or to qualify slightly, the course he has adopted,” she said.

The IMF trimmed its global growth forecasts on the eve of Davos, the world’s biggest annual gathering of the rich and powerful, highlighting the challenges facing policymakers in keeping their economies going.

Lagarde reiterated that the major risk facing the global economy was China-U.S. trade tension, which could precipitate a slowdown in the Chinese economy.

“A slowdown of China is fine. It’s legitimate,” she said. “But if the slowdown was fast, it would constitute a real issue.”