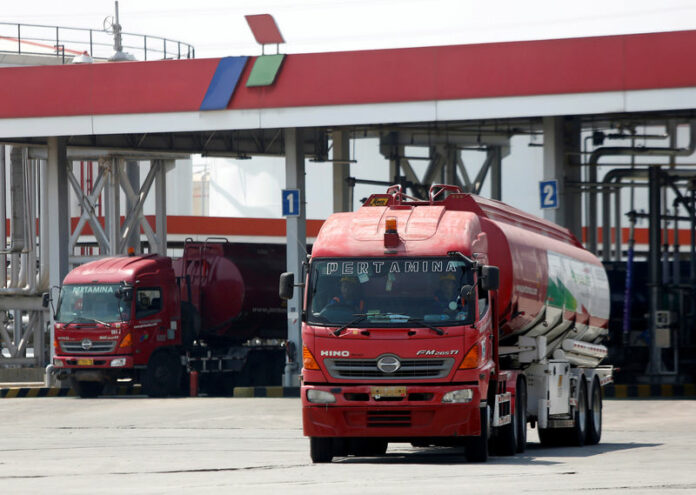 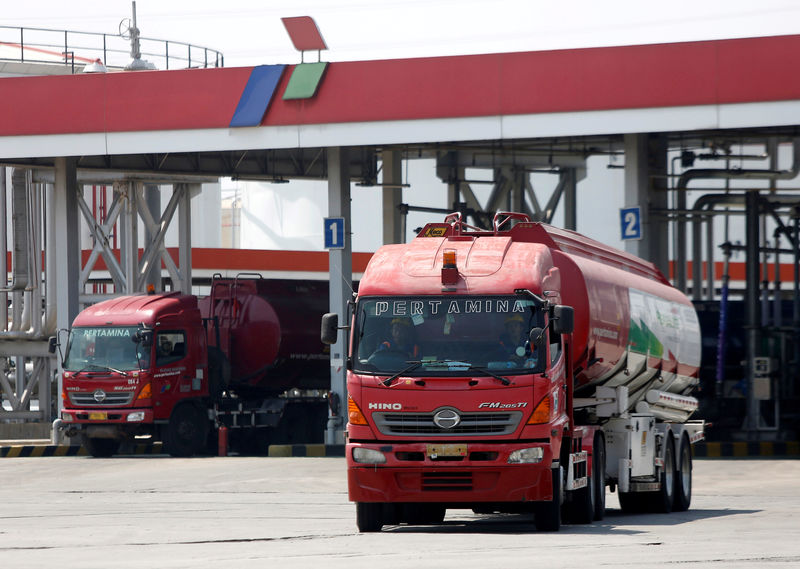 © Reuters. FILE PHOTO: A fuel truck passes storage tanks as it departs after loading its cargo at a state-owned Pertamina fuel depot in Jakarta

By Fergus Jensen and Wilda Asmarini

JAKARTA (Reuters) – Indonesia’s government is planning revisions of its oil and gas law with President Joko Widodo this week responding to a proposal initiated by parliament, calling for a plan to revive the ailing sector and boost the country’s energy independence.

Widodo this week met with his senior cabinet members to craft a response to parliamentary proposals for a new law submitted in December.

The revisions should provide momentum for regulatory reforms to make the oil and gas sector more efficient, transparent, straightforward, sustainable and provide added value to the national economy, Widodo said according to a statement from the cabinet secretary issued late on Wednesday.

Formerly an oil exporter and member of the Organization of the Petroleum Exporting Countries, Indonesia’s crude output has plunged while its fuel demand has surged, making the country reliant on imports of gasoline and diesel.

The slump in oil and gas output has followed years of regulatory uncertainty. Recent pressure from the government on state-owned energy producer PT Pertamina to take over assets from oil majors like Chevron (N:) and Total (PA:) has stoked concerns among foreign energy investors about the security of their projects.

Indonesia has struggled to revamp its last set of oil and gas laws passed in 2001 and a parliamentary committee finally proposed a new law to the full body in December.

Issues surrounding the oil and gas sector have long been a source of tension with foreign investors, and resolving these matters has proven challenging for Widodo, who is running for re-election in April.

“The aim of this revision must not only be to push to increase oil and gas production, but also to support the strengthening of national capacities, strengthening domestic industries and investment in our human resources in the oil and gas industry,” according to a statement on the cabinet secretary’s website.

Among the changes the parliament proposed and which Widodo and his cabinet will discuss with them is the creation of a new oil and gas business entity that will also serve as a regulator, called BUKMigas, according to a draft of the law reviewed by Reuters.

In addition to its regulatory role, BUKMigas will also be able to undertake work in oil and gas exploration and production. However, BPHMigas will still maintain oversight of pipeline fuel and gas transportation.

For the first time, Indonesia would have a state petroleum fund, bankrolled with revenue the government makes from oil and gas production as well as levies and bonuses, according to the draft.

More talks about the proposed law will be held between Widodo’s government and the parliament. Late on Wednesday, Energy and Mineral Resources Ministry Legal Bureau Chief Hufron Asrofi told reporters that the government is compiling a list of problems with the current draft for discussion.

According to a note on Indonesia’s oil and gas policy published this week by Fitch Solutions Macro Research, much work is still needed to attract investment to the oil and gas sector.

“When viewed in the context of intensifying competition for foreign direct investments across South and Southeast Asia, Indonesia remains at risk of falling behind, despite its impressive reserves profile and large market, if the tightening state grip over the sector is not loosened.”