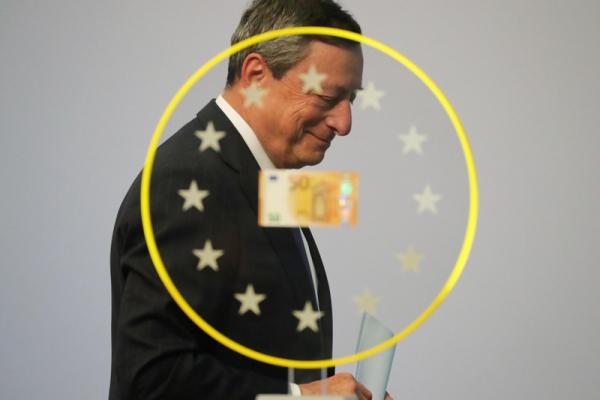 Risks around Euro Area Outlook are to the Downside: ECB’s Draghi

Investing.com – European Central Bank President Mario Draghi acknowledged a slowdown in the euro area economy on Thursday, saying risks around the outlook for growth had “moved to the downside.”

Speaking at the ECB’s post policy meeting press conference Draghi said incoming data have continued to be weaker than expected and said the slowdown was largely due to the rise in protectionist policies and financial market volatility.

He added that growth is likely to be weaker in the short term.

“The risks surrounding the euro area growth outlook have moved to the downside on account of the persistence of uncertainties related to geopolitical factors and the threat of protectionism, vulnerabilities in emerging markets and financial market volatility,” he said.

He reiterated that the ECB remains ready to adjust its monetary policy instruments to ensure that inflation continues to move towards the central bank’s target.

The ECB left on hold as expected earlier in the day.

A recent sharp slowdown in euro area growth has fueled expectations that any further policy normalization could be delayed after the ECB ended its four-year long €2.6 trillion ($2.96 trillion) bond purchase plan last month.

Data earlier in the day showed that at the start of the year as a fall in new work meant growth was at a low not seen since the middle of 2013.

Similar surveys showed activity remained lackluster in during January and contracted in for a second month.

Economic weakness in the euro zone, coupled with growing concerns over the negative impact of global trade tensions have caused economists to push back their expectations for the ECB to move forward with policy tightening.

“While an outright recession will probably be avoided this year, a sharper-than-expected slowdown in the U.S. or further escalation of the (U.S.-China) trade war may be enough to cause a mild recession,” Andrew Kenningham, chief euro zone economist at Capital Economics, warned.

In the midst of slowing growth, trade worries and lingering uncertainty regarding the U.K.’s separation from the European Union, economists don’t expect the ECB to raise its deposit rate until the fourth quarter and to wait until early 2020 to raise its refinancing rate from zero.