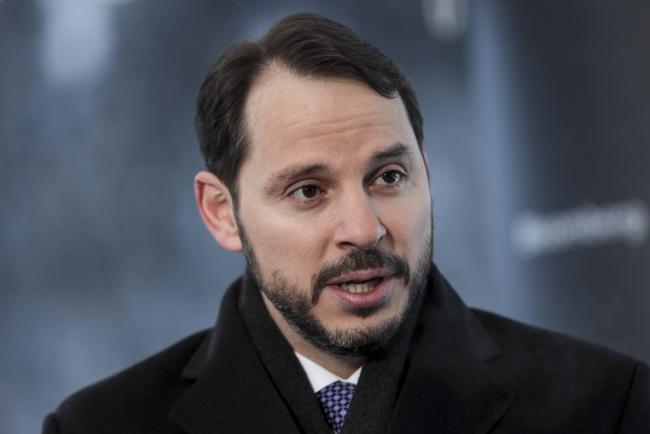 (Bloomberg) — The man in the cockpit of the Turkish economy is preparing it for a “soft landing” after bouts of severe currency turbulence.

While Turkey is increasingly at risk of its first recession in a decade, Treasury and Finance Minister Berat Albayrak said the economy is actually showing signs of a slowdown in line with the government’s plan to shift to “quality-based growth” after the lira’s crash capped years of runaway expansion.

The economy will bounce back to meet the official growth target of 2.3 percent by end-2019 in what’s going to be “very much a promising year for us,” Albayrak said Thursday in an interview with Bloomberg Television from the World Economic Forum in Davos, Switzerland. Still, the deceleration probably continued into the first three months of this year, he said.

“There has to be some slowing down,” Albayrak said. “This is a soft-landing strategy.”

Others are less confident that policy makers can avoid crashing the Middle East’s largest economy. Industrial production has already plunged and consumer confidence is fast declining. Moody’s Investors Service has warned that losses for the lira will translate into a sharp contraction through the first half of this year.

Turkey’s economy is on track to shrink for three quarters in a row through June this year, according to forecasts compiled by Bloomberg. The most recent data showed gross domestic product grew in July-September at the slowest pace since 2016 on an annual basis and contracted from the previous three month.

Read for More on Slowdown in Turkey’s Economic Growth

Policy makers are trying to steer the economy through what Albayrak has repeatedly called a “balancing” period after the lira’s crash last year crippled bank lending. As part of that approach, the government has pumped stimulus into its economy to stop some key sectors such as manufacturing from a rapid contraction, but refrained from massive incentives that would worsen foreign imbalances while boosting growth.

Albayrak’s three-year economic plan, unveiled in September, was evidence of the caution that informs the thinking in Turkey. In it, the minister set a growth target for 2019 that’s nearly a third of the pace seen in 2017.

The lira lost more than a quarter of its value in August last year, when Albayrak said Turkey was the target of “economic warfare” waged by foreign powers. The depreciation pushed consumer inflation to over 20 percent, compared with the 5 percent official target. It also hurt domestic demand, typically the biggest driver of economic growth.

The spike in price gains forced the Turkish central bank to raise interest rates to the highest level in more than a decade in September. President Recep Tayyip Erdogan, historically an advocate of lower interest rates, has recently refrained from attacking rate setters over elevated borrowing costs. The bank’s decision last week to keep rates on hold spurred a rally in the currency as concerns over premature easing fade.

“The central bank is doing its job very well in the last couple of months and they have proved how independent and how strong they are,” Albayrak said. “Monetary and fiscal policy alignment is the best in decades. You can only fight against inflation with both fiscal and monetary policies.”

Albayrak reiterated his pledge to keep a lid on public spending to help curb inflation but markets remain cautious on the government’s ability to hit fiscal targets during an election year.

The three-year economic program sees the government budget deficit at 1.8 percent of gross domestic product at the end of 2019, compared to the median estimate of 3.1 percent in a Bloomberg survey of analysts.

Under Albayrak’s watch, the Treasury has moved to limit lira bond supply in an effort to restrain yields after a market rout last summer. It hasn’t sold a benchmark 10-year bond denominated in liras since July. In November, the fiscal authority canceled planned debt auctions.

At the same time, the government has turned to local savers for its foreign-currency financing needs. In January, it raised more than 1 billion euros ($1.1 billion) in the domestic market.

The minister said the Treasury will be “very active and aggressive” in managing its borrowing strategy, in line with his earlier pledges to adopt a different auction methodology.