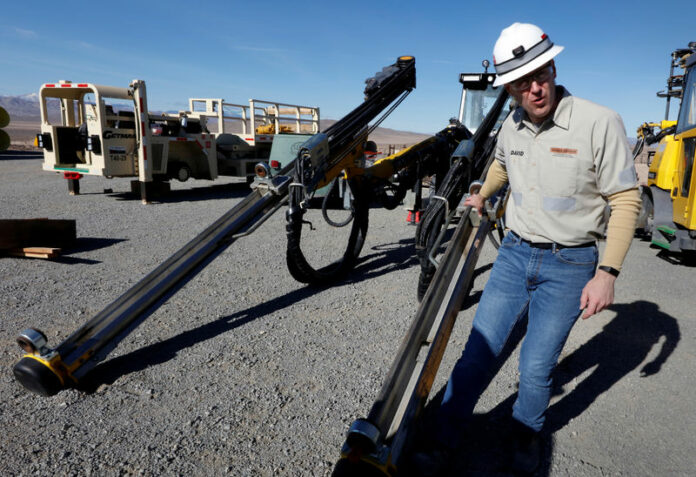 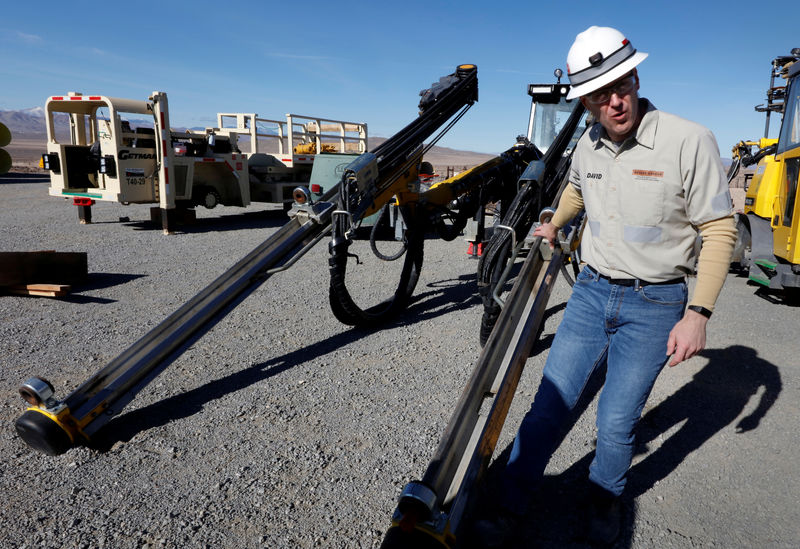 © Reuters. Vice President of Operations at Nevada Copper’s Pumpkin Hollow copper mine, describes a piece of equipment in Yerington, Nevada

YERINGTON, Nev. (Reuters) – Once seen as a laggard in the global mining industry, U.S. deposits have quietly drawn more than $1.1 billion in investments from small and large miners alike as Tesla and other electric carmakers scramble for more of the red metal.

Four U.S. copper projects are set to open by next year – the first to come online in more than a decade – with several mine expansions also underway across the country, home to the world’s fifth-largest copper reserves, according to the U.S. Geological Survey.

The rising popularity of electric vehicles – which use twice as much copper as internal combustion engines – and increasingly pro-mining policies in the U.S. while other nations exert greater control over their mineral deposits are fueling the spending, according to mining executives and investors.

“Fifteen years ago, U.S. mining was thought to be a dead industry, but now it’s a profitable area for us,” said Richard Adkerson, chief executive of Freeport-McMoran Inc (N:).

The Phoenix-based miner, which last month relinquished majority control of the world’s second-largest copper mine under pressure from the Indonesian government even though it will remain the project’s operator, is set to open a $850 million expansion of one of its Arizona copper mines next year.

“The U.S. is really the core for our future growth,” Adkerson said. The U.S. is home to half of Freeport’s reserves.

The buildouts are expected to boost U.S. copper production by at least 8 percent in the next four years, according to data from the International Copper Study Group and DBS, with Nevada Copper Corp (TO:), Taseko Mines Ltd (TO:), THEMAC Resources Group Ltd (V:) and Excelsior Mining Corp (TO:) aiming to open copper mines by the end of 2020.

The development trend has gone largely under the radar, with copper industry customers like Tesla Inc (O:) – rather than miners themselves – grabbing the headlines. But that is slowly changing.

The prospect of a copper boom in the U.S., where the Trump administration is pushing for mining permit approvals to be approved five times faster and where resource nationalism fears are largely absent, is starting to draw major institutional investors.

Industry analysts recommend investors buy shares of companies building new U.S. copper mines, a marked change from just 12 months ago when most recommendations were to hold.

Four analysts, for instance, advise buying Taseko shares; none did a year ago. These analysts also have set price targets for the miners at more than double current trading levels, according to Refinitiv data.

“The copper industry needs areas of good supply with low political risk, and that’s what we get in the United States,” said Stephen Gill of Switzerland-based Pala Investments, Nevada Copper’s largest shareholder.

Nevada Copper’s Pumpkin Hollow copper project in Yerington, Nevada is less than 60 miles (100 km) from Tesla’s massive Gigafactory, a proximity that Gill said was a key factor in Pala’s investment.

Surrounded by onion farms and backed by the Sierra Nevada mountains, the Pumpkin Hollow mine will produce more than 100,000 tons of copper each year once its underground and open-pit portions fully open, which is slated to happen in phases.

“Copper is king for this electrification trend taking over the global economy,” said Matt Gili, Nevada Copper’s chief executive. “We see demand increasing steadily in the years ahead and, so far, supply is not keeping up.”

Majors Freeport, Rio Tinto (L:) and BHP Group Ltd (AX:) also have U.S. copper projects of their own under development. These come just as copper prices are forecast to rise more than 10 percent in the next two years, according to Canaccord Genuity.

Nevada Copper’s project has been largely supported by local residents in a state whose economy is linked to mining. But elsewhere, there has been opposition due to concerns about water rights and native lands.

“Green technologies can have a dark side,” said John Hadder of Great Basin Resource Watch, a Nevada-based environmental group.

Nevada Copper and other junior miners have an advantage over larger peers. Their smaller balance sheets force them to plan small copper mines, making permitting and negotiations with local residents easier.

Rio and BHP, for instance, have been trying since 2001 to open Arizona’s Resolution Copper mine, one of the world’s largest projects of its type.

The two are still waiting for regulatory clearance, having spent more than $1.3 billion since 2001, in a delay brought on partly by a dispute involving local American Indian tribes.

The mine is not slated to open until at least 2030. The U.S. Forest Service is expected to post a draft environmental study on the project by this summer, after which American Indian groups and others will be able to give feedback.

Rio is also studying ways to open the mine sooner – perhaps a year or two – by making engineering changes, but nothing has been finalized, said Arnaud Soirat, head of Rio Tinto’s copper and diamond businesses.

Resolution is on U.S. federal land, complicating the development. Many of the projects that are set to open in the next two years, though, are on private land, fueling an easier path to bring copper to a hungry market.

“I’m convinced over time there will be a global movement toward renewable energy generation and electric vehicles … that means the world will need our U.S. copper,” said Freeport CEO Adkerson.