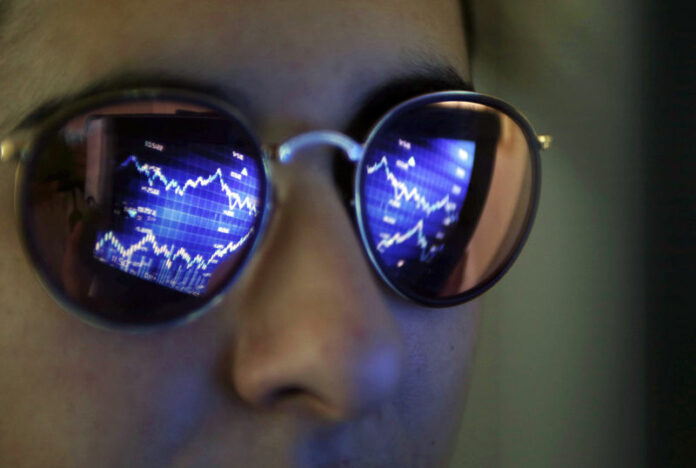 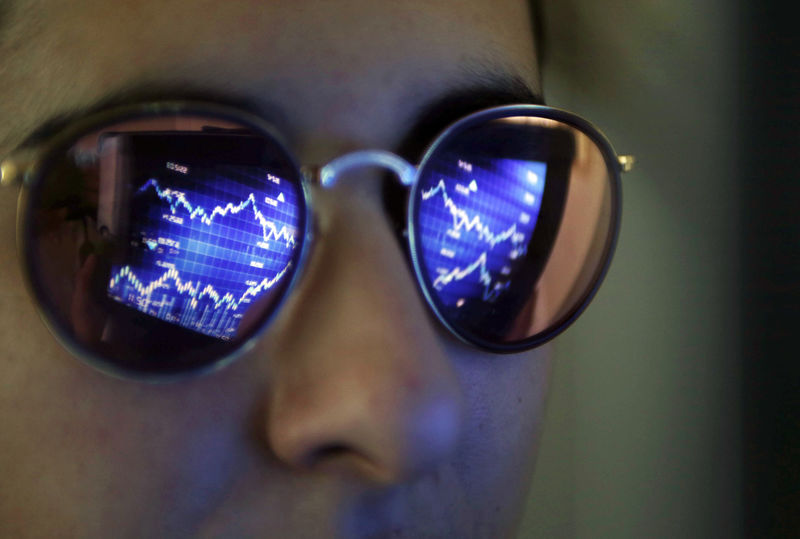 © Reuters. A computer screen showing stock graphs is reflected on glasses in this illustration photo taken in Bordeaux

(Reuters) – Global investors recommended an increase in equity holdings to the highest in almost a year, with a majority of funds polled by Reuters this month saying the pull-back in stocks has run its course.

That was the highest since February last year and up from 47.2 percent in the previous month.

Financial markets swung wildly toward the end of 2018, slashing yearly gains from stocks to commodities. The global MSCI index, the S&P 500, and the all had their worst year since the financial crisis.

That was driven by a steady drumbeat of disappointing economic data reinforcing concerns of slowing global growth, alongside an escalating U.S.-China trade war and an impasse over the terms under which Britain will leave the European Union.

While those risks remain, equities have recovered somewhat this year. Sixty percent of fund managers who answered an additional question said the sell-off in global stocks is done.

The has risen more than 10 percent from a trough carved on Dec. 26 last year.

Bond allocations were trimmed in the latest poll to 39.1 percent on average from 39.5 percent. Cash holdings – a gauge of investor caution – nudged up to 6.2 percent from 6.1 percent, the highest since November 2016. That suggests fund managers aren’t yet confident about a significant lift-off in stocks.

Clear signs of a U.S. economic slowdown and the longest-ever closure of the federal government are likely to keep the Federal Reserve on the sidelines until at least April. U.S. policymakers reinforced their recent dovish stance on Wednesday. [ECILT/US]

Indeed, separate Reuters polls of over 500 economists around the world this month showed a synchronised global economic slowdown is now under way, and any escalation in the U.S.-China trade war risks would trigger a sharper downturn. [ECILT/WRAP]

“We start 2019 constructive on stocks but have been trimming the size of our overweights as we expect to get more cautious on the outlook as the year progresses,” said Trevor Greetham, head of multi-asset at Royal London Asset Management.

Those concerns coincide with growing unease among market strategists polled by Reuters who have lowered forecasts in the past few months across various assets, from stock prices to bond yields and oil.

Among global asset managers, the most notable change this month was a cut to European asset allocations.

“We have moved Europe to a deeper underweight as European economic data have been worse than expected and political risks are growing,” Greetham said.

But for now at least, allocations to North American assets were largely left unchanged.

“While global equity valuations are still reasonably attractive … it is noticeable that this is happening amidst a backdrop of continuing trade uncertainty between the U.S. and China and a deteriorating corporate earnings growth outlook for 2019,” said Thomas McDonald, portfolio manager at Russell Investments.

“From this perspective, we find it hard to justify a view other than ‘neutral’.”

About 60 percent of fund managers in the latest poll who answered an additional question said the long-dollar position was not the most crowded trade anymore.

That echoes the views of currency strategists polled by Reuters, who concluded that a rapid dialing-back of Fed rate hike expectations has diminished the greenback’s edge over its peers.

But emerging markets are still being approached with caution, as in recent months.

“Now that the Fed is unlikely to raise interest rates over the near term, the biggest risk to the economy and the markets is trade tensions with China,” said Alan Gayle, president of Via Nova Investment Management.

“If progress is made, equity prices, particularly international and emerging market prices, should benefit. We are hopeful, but will wait for results before committing and reallocating funds.”

Wall Street bounces back on boost from banks, Apple after volatile week

Wall Street bounces back on boost from banks, Apple after volatile week