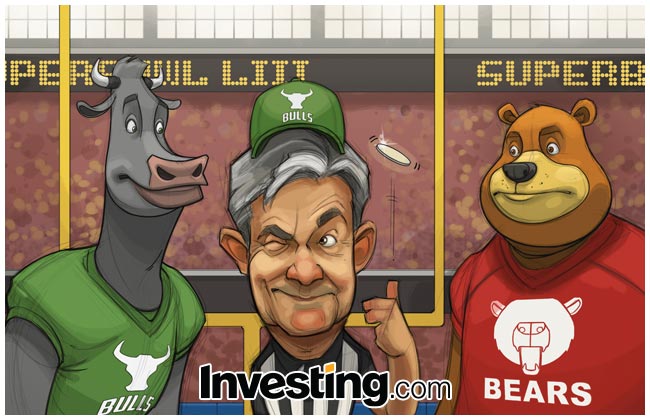 Weekly Comic: The Fed Caves as Powell Sides with The Bulls

Investing.com – The sent the clearest signal yet that its three-year drive to tighten monetary policy is close to an end in the face of rising pressure on the economy from slowing global growth.

The U.S. central bank left interest rates on hold at the conclusion of its policy meeting on Wednesday and pledged to be patient with further interest rate hikes, dropping its guidance that ‘further gradual’ rate rises will be needed.

It also said it could alter the pace of its balance sheet reduction “in light of economic and financial developments”.

Market analysts said the Fed statement was , even more so than expected, and Fed Chair Jerome Powell was also dovish during a post-statement press briefing.

“The case for raising rates has weakened somewhat,” Powell said.

U.S. stocks surged on Wednesday following the Fed’s dovish tilt, which marks a significant change to the bank’s stance it stressed only six weeks ago, leading to some in the market to believe that a recent drop in stocks forced Powell to and side with the bulls.

Powell had roiled markets in December when he said Fed balance sheet policy was on “autopilot.”

Meanwhile, , one of the world’s largest sporting events, will be played between the New England Patriots and the Los Angeles Rams at the Mercedes-Benz Stadium in Atlanta, Georgia on Sunday. It has a 6:30PM ET (23:30 GMT) start time.

The Patriots have played in three of the past four Super Bowls and won two of them, while the Rams last played in the NFL’s title game in 2002.