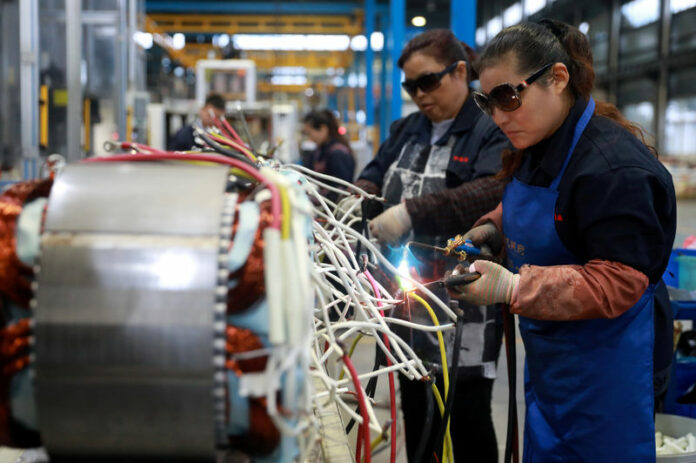 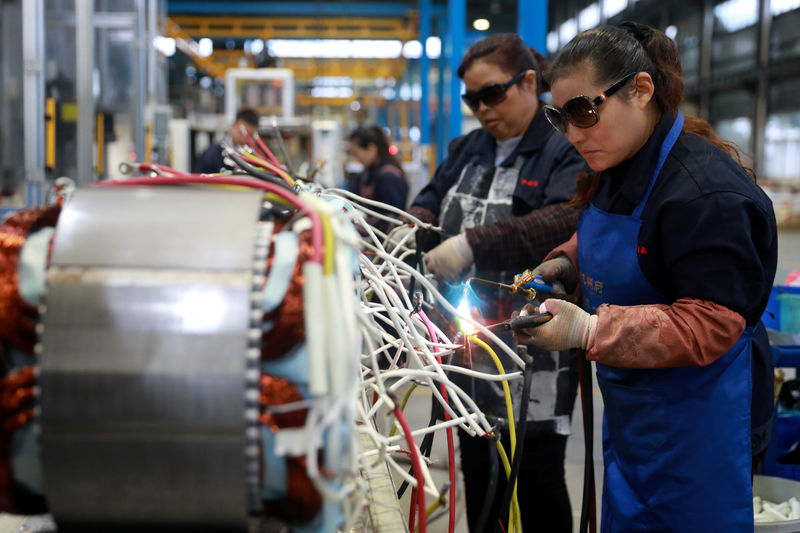 HONG KONG (Reuters) – Factory activity shrank across much of Asia in January, falling to the weakest in years in several countries and adding to worries that trade tariffs and cooling demand in China pose an increasing threat to global growth.

In some countries, such as China, Australia and India, there is even chatter about potential rate cuts.

Trade-focused Asia appears to be suffering the most visible loss of momentum so far, but the euro zone economy is stuck in low gear and many emerging markets are sputtering.

The U.S. economy, while a bit wobbly of late, still looks set to post solid growth, though softer than last year’s pace.

That puts pressure on Beijing to come up with more stimulus measures at its upcoming parliamentary meeting in March and find common ground with the United States to prevent their trade war from escalating, with a truce expiring next month.

“The slowing down of the manufacturing sector in Asia continues,” said Irene Cheung, Asia strategist at ANZ.

“A lot depends on whether the U.S. and China come to a reasonable deal. Then we can actually avert this potential trade recession, but at the moment it’s all tentative.”

U.S. President Donald Trump said on Thursday he will meet with Chinese President Xi Jinping soon to try to seal a comprehensive trade deal as Trump and his top trade negotiator both cited substantial progress in two days of high-level talks.

Trump, speaking at the White House during a meeting with Chinese Vice Premier Liu He, said he was optimistic that the world’s two largest economies could reach “the biggest deal ever made.”

Meanwhile, bleak factory gauges suggests that the global economy will get worse before it gets better.

China’s factory activity shrank by the most in almost three years in January as new orders slumped further and output fell, the private Caixin/Markit PMI survey showed. The numbers were weaker than Thursday’s official PMI survey.

Taiwan posted its weakest readings since September 2015, South Korea the joint-lowest since November 2016 and Indonesia the first contraction in a year.

Japan’s factory activity was the slowest in 29 months, with weakening exports and output suggesting it could soon fall into contraction. Manufacturers in the world’s No.3 economy are facing both falling exports and a likely slump in domestic demand when the country’s sales tax is hiked in October.

Freight rates for dry-bulk and container ships, carriers of most of the world’s raw materials and finished goods, have plunged over the last six months.

The , a measure of ship transport costs for materials like iron ore and coal, has fallen by 47 percent since mid-2018, when the main tariffs were imposed.

A Reuters poll of hundreds of economists from around the world showed a synchronized global economic slowdown was under way, with growth forecasts cut for 33 of 46 economies.

The International Monetary Fund last week cut its world growth forecasts for this year and next and said failure to resolve protectionism could further destabilize the slowing global economy.

Those concerns were reinforced on Monday by sales warnings from Caterpillar (NYSE:) and Nvidia Corp, coming on the heels of similar alarms raised by Apple Inc (NASDAQ:), FedEx Corp (NYSE:) and a host of chipmakers.

Veteran China watchers typically advise taking its data early in the year with a pinch of salt, suspecting the trends may be distorted by the timing of the Lunar New Year holidays.

Many firms scale back operations or close for long periods around the holidays, which begin on Feb. 4 this year.

However, workers, business owners and labor activists have told Reuters that companies are shutting earlier than usual as the trade war bites, with some likely to close for good.

So far, China has fast-tracked infrastructure projects, cut taxes and pumped liquidity into the financial system to help keep cash-starved firms afloat. It has also been guiding down borrowing costs.

Investors are closely watching to see if Beijing unveils more fiscal stimulus during the upcoming parliamentary meeting in March, including bigger tax cuts, though the effects of policy easing are not expected to steady the economy until the second half of the year.

Chinese leaders, with an eye on a mountain of debt, have vowed they will not resort to massive stimulus like that deployed in past downturns. But some analysts believe more aggressive measures such as rate cuts are possible if conditions sharply deteriorate.

“Although we believe (China’s) GDP growth will eventually bottom out, markets do not appear to have factored in such a sharp slowdown and may still be putting, in our opinion, too much faith in the efficacy of government support,” economists at Nomura said in a recent note.

Even then, some economists say support measures may only steady activity in China and not produce a strong rebound in its demand like that which helped pull the global economy out of recession after the financial crisis.

“The global outlook is a bit more at risk from China today than it was, say, two or three years ago,” said Sonal Desai, chief investment officer at Franklin Templeton Fixed Income.