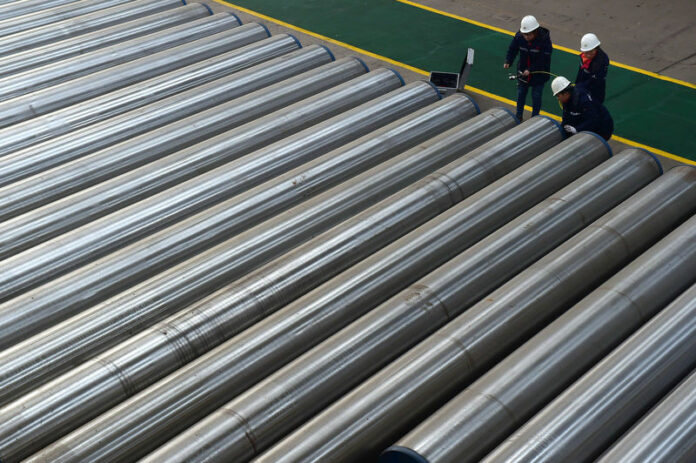 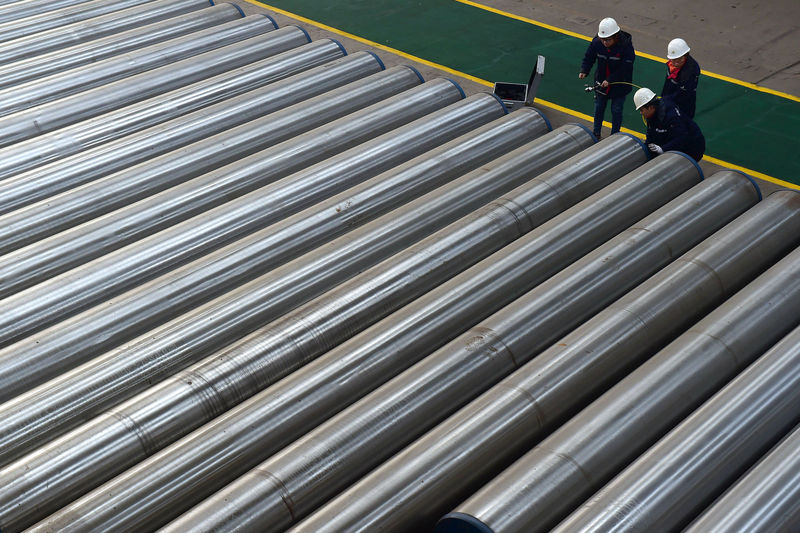 © Reuters. Workers check on seamless steel pipes at a factory of a steel products manufacturer in Cangzhou, Hebei

HOUSTON(Reuters) – U.S. metals importers that applied last year for exemptions from tariffs on steel and aluminum are losing hope the Commerce Department will approve their petitions, as the recent government shutdown added to a wait that for some has stretched to eight months without a ruling.

Importers, ranging from pipeline giant Kinder Morgan Inc (NYSE:) to a steel tube manufacturer Sanitube, have submitted some 64,000 requests to avoid tariffs of 25 percent on steel and 10 percent on aluminum that President Trump ordered last March, according to the latest Commerce Department data obtained by Reuters. The sheer number of requests, a late decision to allow appeals and the 35-day government shutdown that ended last week, have left more than half the petitions without a decision.

When the Trump administration evoked a rarely-used national security clause to impose the tariffs, it offered relief to companies that struggled to find home-made substitutes and many importers were optimistic they could secure exemptions.

Yet out of the 64,000 requests submitted by hundreds of companies, the administration has so far approved around 14,700 and rejected 5,450, according to Commerce. Around 10,000 have been returned without action due to filing errors, Commerce said.

Now, some importers say they have all but given up on relief, assuming higher prices are there to stay, acting as a lasting drag on their business and, more broadly, on the whole economy.

Sanitube LLC, a Florida-based supplier of stainless steel tubes for the food and other industries filed two similarly-worded exclusion requests for different sized products last year. One application, for a much larger volume, was denied as “incomplete” and the other was granted. Sanitube President Todd Adams, estimates that denial had cost it hundreds of thousands of dollars.

“I’ve basically written it off,” Adams told Reuters. He said he still planned to re-submit a request for relief, but called the quest to overturn the initial rejection “a pet project.”

Texas-based Heat Transfer Tubular Products, which makes parts for the oil and gas industry, lost a ruling last year and has not even sought a reconsideration, said Janese Sokulski, vice president of sales.

As decisions on requests for relief drag on, companies are passing on as much of the extra cost as they can to consumers, while absorbing the rest. Some foreign suppliers are also covering some of the costs to stay competitive in the U.S. market.

While the tariffs helped curb imports and bolster domestic steel industry, they have increased costs for auto, construction, food service and energy companies. The Federal Reserve’s Jan. 16 “Beige Book” snapshot of economic conditions pointed to tariffs as contributing to rising costs in several regions of the United States.

Originally, the government said most exemption applications could be processed in about 90 days. But an uproar over the number denied led to an extended review process for contested applications and significantly longer wait times.

“They started off saying ‘I’m really important, I’m a critical need, there’s no way this administration, who loves me, is going to hurt me,'” Goldenberg said about the petitioners. “They have totally different language now.”

A Commerce spokesman said the expanded review was a “worthwhile addition to the exclusion process,” and that it “welcomed all valid exclusion requests and has dedicated resources to render determinations as expeditiously as possible.”

The spokesman added that requests could be processed faster if it had obtained authorization from Congress to allocate more funds to the process. It requested to reallocate $5 million from other parts of Commerce’s budget, but so far has only been allowed to reallocate $3.3 million for the review.

For the steel industry, 2018 was a good year. It saw a 2 percent increase in employment, above the 1.8 percent gain for all non-farm jobs, according to U.S. Labor Department data. The latest figures from the American Institute of Steel and Iron also showed U.S. steel shipments up 4.7 percent in the first 11 months of 2018, while imports were down 10.5 percent in January-October.

“The overall condition of the industry has improved,” said Tom Gibson, president and chief executive officer of AISI.

However, the tariffs have hurt other industries.

“A lot of expansions and contracts are on hold. The impacts of pricing have been significant,” said U.S. Representative Jackie Walorski, an Indiana Republican. Some businesses in her district have furloughed workers or canceled expansions due to tariffs.

Kinder Morgan, which bought Turkish steel pipe subject to a 50 percent tariff for about half of a $1.75 billion pipeline, still has not received a ruling on its May exemption filing.

An exclusion for another energy project proposed by Plains All American Pipeline also remains under review after an initial denial last July.

The tariffs are projected to add $40 million to Plains pipeline cost and as much as $80 million to Kinder Morgan’s.

“We made a strong case to the Department and hope they resolve the issue quickly,” Kinder Morgan said in an emailed statement.

Plains did not respond to a request for comment.

In the U.S. shale fields, where oil production is at record levels, prices for so-called tubular goods used in drilling, soared last year, adding to cost pressures in well-drilling and finishing, according to data from consultancy Wood Mackenzie.

In one West Texas oilfield, tubular goods prices climbed 31 percent, it said, primarily due to tariffs. In another shale field that stretches across parts of Texas and northern Louisiana, tariffs bumped the cost of drilling a new well by a third to $850,000.

“The companies are still lobbying for some concessions, but I think they’re getting pretty weary,” said Scott Forbes, a vice president of research at Wood Mackenzie.