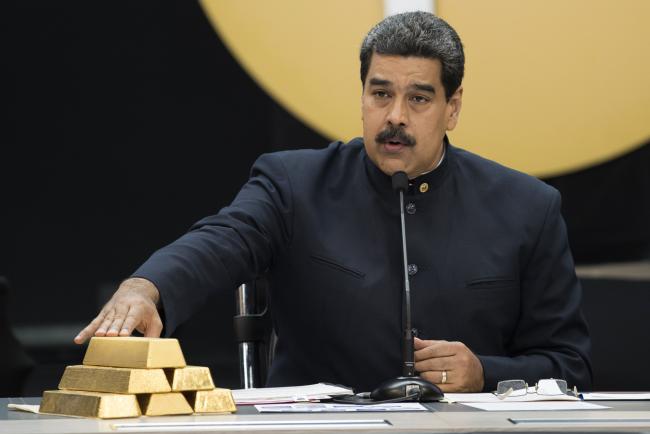 (Bloomberg) — The embattled Nicolas Maduro regime halted plans to ship 20 tons of Venezuelan gold overseas as a growing international push to ring-fence the country’s dwindling hard assets unnerved those handling the transaction, according to a person with direct knowledge of the matter.

The gold bars, which are worth about $850 million, had been weighed and separated for transportation, but will not be sent out anytime soon from the central bank’s vaults in Caracas, the person said. The blocking of the shipment comes just a week after the Bank of England denied Maduro officials’ request to withdraw $1.2 billion of gold stored there.

While the destination of the gold and the nature of the transactions aren’t known with certainty, it’s somewhat unusual for a country to be shipping around such massive amounts of gold. And the U.S. officials who are leading the push to have Maduro cede power to a transitional government contend that the attempted transactions form part of his authoritarian regime’s bid to ransack the country in its final days in power.

“My advice to bankers, brokers, traders, facilitators, and other businesses: don’t deal in gold, oil, or other Venezuelan commodities being stolen from the Venezuelan people by the Maduro mafia,’’ National Security Adviser John Bolton said in a tweet this week.

The gold bars held both in Caracas and London are an important source of wealth for a country that has plunged into extreme poverty under Maduro’s socialist rule. The $2 billion worth that was caught up in these two transactions represents about a quarter of all the Venezuelan central bank’s foreign reserves. Those assets form a key part of the fierce battle for control of Venezuela’s finances between Maduro and Juan Guaido, the National Assembly leader who is trying to install a transitional government with the support of the U.S. and other countries.

On Thursday, Marco Rubio, the Florida senator who has helped spearhead the U.S.’s hard-line stance toward Maduro, fired off a tweet calling out the United Arab Emirates’ Noor Capital as the financial firm orchestrating the gold transaction with Venezuelan authorities. Rubio went on to warn the firm that both it and any airline it hires to take the gold away will be subject to the sanctions that the U.S. government has been stepping up in recent days.

“This has to do with risk assessment due to Venezuela’s current state, not only because of political consequences but due to the impact of sanctions,” said Asdrubal Oliveros, director of Ecoanalitica, a consulting firm in Caracas. “It’s very likely the countries interested in buying are weighing the implications and reputational factors.”

In interviews and press conferences, Guaido has stressed again and again his team’s push to safeguard Venezuela’s assets so that they can be used to fund the flow of humanitarian aid. He has scored key victories in recent days on this front. The Trump administration imposed fresh sanctions on the national oil company PDVSA, effectively blocking Maduro from exporting crude to the U.S., and granted Guaido control of Venezuelan assets at the Federal Reserve Bank of New York. These moves followed the Bank of England’s decision last week.

“The English stole the gold in the Bank of England,” Diosdado Cabello, the powerful No. 2 in Maduro’s socialist party, said in a speech broadcast on state television this week. “The imperialist bosses should know that we will never give up.”