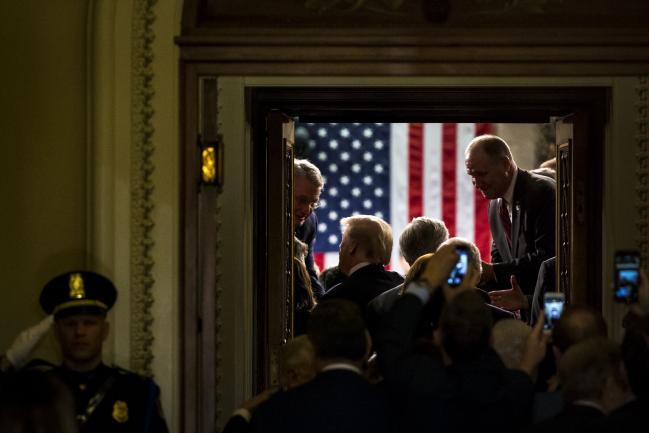 © Bloomberg. U.S. President Donald Trump, center, walks into the House Chamber to deliver a State of the Union address to a joint session of Congress at the U.S. Capitol in Washington, D.C., on Jan. 30, 2018.

(Bloomberg) — Markets should “pay close attention” as President Trump may sound more upbeat about the economy during tonight’s State of the Union address, but “many of his core supporters don’t feel it,” Horizon Investments’ chief global strategist Greg Valliere wrote in a note.

“They believe the tax cuts only benefited corporations and the rich; the country overwhelmingly wants higher taxes on the wealthy,” Valliere said. “Higher taxes is the single biggest domestic issue heading into the next decade.”

Tump needs to boast about the economy, Valliere said, but is instead likely to get “bogged down” on border wall funding and trade wars and tariffs, “making business leaders reluctant to commit to new investments.” The president also needs to “expand his base and cut some deals. He’s a salesman who begins his final campaign tonight after a battering in January that raised the likelihood that Trump – unlike Reagan – could be a one-term president.”

Separately, Raymond James policy analyst Ed Mills wrote he’ll be watching whether Trump takes “the more traditional path of outlining an agenda that attempts unity or if he will stick to themes that will rally his political base and foreshadow continued clashes,” with a focus on any hints about trade negotiations with China, a resolution for government funding/border security, drug pricing and any infrastructure plan.

Mills joined other analysts who’re expecting clues on trade policy will be top of mind for stock investors watching the State of the Union speech. The consensus is that trade remarks may influence equity sectors from footwear to auto parts, while pharma stocks may be volatile if the president zeros in on drug costs reforms, and financials and housing may be overlooked.