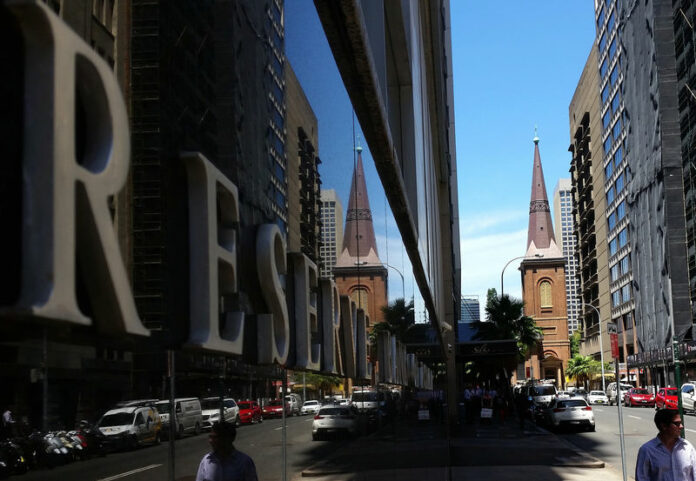 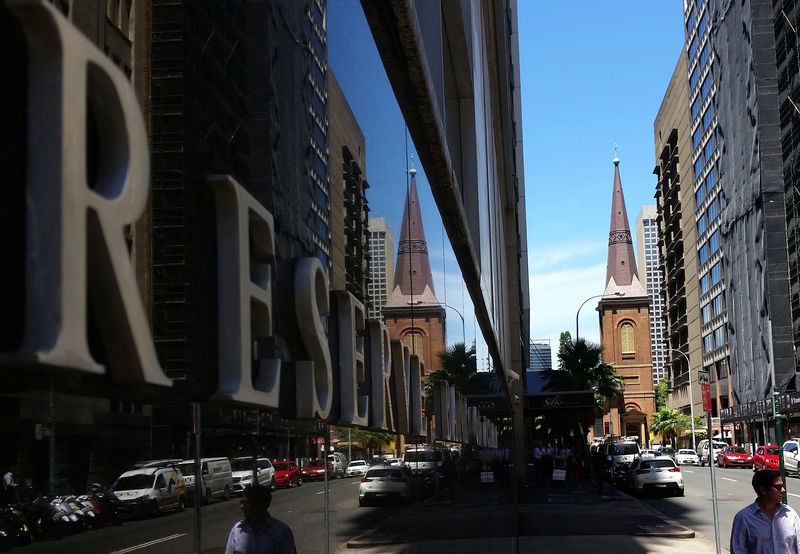 © Reuters. Pedestrians walk past the Reserve Bank of Australia building in central Sydney

SYDNEY (Reuters) – Australia’s central bank on Wednesday opened the door to a possible rate cut as it acknowledged growing economic risks in a remarkable shift from its long-standing tightening bias that sent the local dollar sliding.

In his first public speech of the year, Reserve Bank of Australia (RBA) Governor Philip Lowe said rates could move in either direction, depending on the strength of the labor market and inflation.

“Through much of last year it looked more likely to me that the next move in interest rates would be up than down. But now things are more equally balanced,” Lowe said.

The policy shift caught some investors off-guard as only just the previous day the RBA had steered clear of an easing signal when holding its official cash rate at a record low 1.50 percent for the 30th straight month.

Not surprisingly, the Australian dollar was sent skidding 1.1 percent to a one-week trough of $0.7153.

“We were a bit surprised that the shift to a clearly neutral stance was not communicated yesterday,” said Su-lin Ong, Sydney-based senior economist at RBC Capital Markets after dropping her previous rate hike call for later this year.

“Nevertheless, we view a neutral stance as more appropriate and prudent. There is a high degree of uncertainty and risk and that argues for a more patient Reserve Bank.”

“Indeed, a rate hike looks to be off the cards for the foreseeable future. We have the RBA on hold until late 2020 where a first rate hike would be appropriate if the RBA’s forecasts for growth, wages and inflation come to fruition.”

Australia is not alone in having to adjust policy expectations.

Last week, the U.S. Federal Reserve all but abandoned plans for further rate hikes citing slowing global growth as a risk to the world’s top economy. The European Central Bank has also sounded less certain that it will start tightening later this year.

“It’s still entirely plausible the next move will be up,” the RBA chief said.

Lowe listed the ongoing Sino-U.S. trade war, rise of global populism, Britain’s complicated exit from the European Union, political headwinds in the United States and a cooling in China’s economy among downside risks for the RBA’s outlook.

Reflecting those concerns, interest rates futures are now pricing in a 56 chance of an RBA rate cut by the end of the year. A full 25-basis-point cut is seen by mid-2020.

That will help push the jobless rate lower to 4.75 percent from a seven year trough of 5.0 percent now. If that pans out, the RBA expects wages growth and inflation to pick up gradually over 2020.

“Their macro forecasts still assume above trend growth, lower unemployment rate and inflation within target. So, the shift to neutral today shows they are not entirely confident of those forecasts. We think they will be revised over the course of this year,” RBC’s Ong said.

Lowe said he was keeping a close eye on the labor market, which has been tightening since early 2017 with the unemployment rate down to over seven year lows of 5 percent.

If jobs growth continued and wages rose more quickly then “it will be appropriate to lift the cash rate at some point,” Lowe said.

On the other hand, if the unemployment rate started to increase and inflation remained lukewarm the RBA may be forced to trim rates to further record lows, he said.

“We have the flexibility to do this, if needed.”