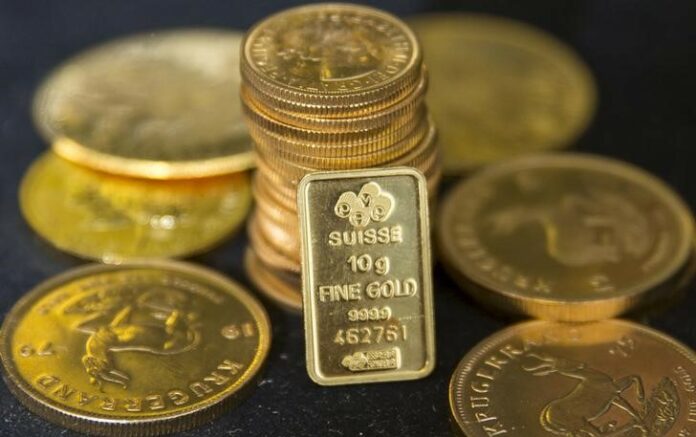 Investing.com – Gold prices dropped on Monday as investors awaited news of progress in trade talks between Washington and Beijing, while the dollar’s strength continued to make the metal more expensive for non-dollar-based investors.

Meanwhile, the , which measures the greenback’s strength against a trade-weighted basket of six major currencies, gained 0.33% to 96.74, a new high for the year.

While a stronger greenback is generally considered a negative for gold as it makes the dollar-denominated metal more expensive for holders of foreign currencies, the precious metal has only fallen about 0.9% since Jan. 31, compared to the 1.5% rise in the dollar index.

Benjamin Lu, an analyst with Singapore-based Phillip Futures, noted that the strong dollar was a short-term obstacle for gold.

“But over a long-term perspective, we are quite bullish. Global growth worries, absence of positive signs in U.S-China trade negotiations and reduction in the euro-zone growth forecasts have laid a strong foundation for gold,” he said.

Along similar lines, Investing.com analyst Pinchas Cohen suggested that the current drop in gold could represent a from the point of view of technical analysis.

Cohen also argued that the recent dollar rally has been due to the currency’s “off-and-on safe haven status” and did not reflect increased faith in economic growth.

High-level officials gather in Beijing this week, aiming to hammer out an agreement over trade, U.S. President Donald Trump warned last week that he had no plans to meet with Chinese President Xi Jinping before a new raft of U.S. import tariffs on Chinese goods comes into effect on March 1. Those comments have been dampening hopes for a breakthrough.

Traders will also be monitoring U.S. economic data for its impact on the dollar and precious metal this week. Figures on consumer prices are due on Wednesday, while December retail sales figures and data on producer prices are set to be released on Thursday.