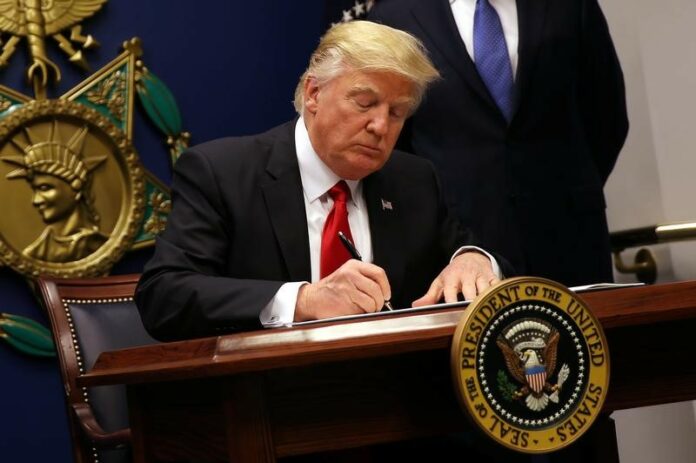 (Bloomberg Opinion) — A new bill in Congress would give the president the power to raise thousands of tariffs in the name of free trade. If that sounds to you like a self-defeating proposition, you’re right.

Republican Representative Sean Duffy of Wisconsin has introduced the Reciprocal Trade Act, which President Donald Trump plugged in the State of the Union address. In both men’s view, other countries have been treating us unfairly by charging American exporters higher tariffs on the same goods than we charge their exporters.

“We’re taken advantage of by many, many countries around the world,” the president said at an event publicizing the bill.

One of Duffy’s examples: The European Union levies a 10 percent tariff on American cars, while the U.S. charges only 2.5 percent on European cars. The legislation would allow Trump to raise our tariff on European cars to 10 percent, too. Armed with this power, Duffy believes, Trump would be better equipped to pressure the Europeans to drop their tariffs.

Proponents of the bill generally ignore the many comparisons that go the other way. The U.S. has a 25 percent tariff on European trucks, while the EU has a 10 percent tariff on our trucks. (Duffy’s bill wouldn’t give the president any authority to reduce tariffs.)

Averaging out the tariffs across product categories, it’s true that the U.S. has lower tariffs than many of our trading partners. But the difference is small. The EU has a 1.8 percent average tariff, we have a 1.7 percent rate, and Canada is at 1.5 percent.

Duffy is right to favor negotiations to drive those rates lower. But the president doesn’t need any additional legislative authority to make a deal with the Europeans that brings our truck tariff and their car tariff down, although no deal could take effect without congressional assent.

That’s how retaliatory tariffs usually work: One country imposes a tariff in response to another, and then both of them keep these policies, which each inflict damage on both sides’ economies. Our tariff on light trucks from Europe is itself the legacy of a trade war from the early 1960s.

A few more trade conflicts that do small-scale harm to our economy and other countries’ economies is, unfortunately, not the worst-case scenario. That’s because what Duffy is proposing goes against 80 years of American trade policy and the rules of the World Trade Organization.

The general principle on which both U.S. trade policy and the WTO are based is non-discrimination among countries. We may set tariffs higher to protect certain industries, but the tariffs will generally be the same for all countries.

If we want to protect our widget-makers from foreign competition with a 10 percent tariff, it will apply equally to Japanese and European widgets. We don’t compound the folly of raising widget prices by encouraging the importation of Japanese widgets over European widgets, or vice versa. And we encourage other countries to follow the same principle.

The great exception to this rule is free-trade agreements, in which two or more countries agree to put lower-than-usual tariffs on one another’s products. Non-discrimination, with a limited trade-liberalizing exception, has enabled large reductions in tariffs over the decades.

Economists generally believe these reductions have increased American and global living standards substantially. But non-discrimination does not lead to reciprocal tariffs. It leads to the U.S. charging a 2.5 percent tariff on cars from the EU and from China, rather than matching each trading partner’s rate.

If the bill were passed and a president used this new authority a lot, we would break the World Trade Organization’s rules and lose many cases there. We could abide by the rulings, in which case we would be right back where we were before; or we could ignore those rulings and let the organization lose authority, or even exit the organization.

That prospect may sound good if you are confident that, as Trump sometimes says, the last several decades of American trade policy have been a complete disaster. If, on the other hand, you believe that our practice and pursuit of free trade have sometimes been flawed but have contributed a great deal to American prosperity, you won’t want to risk blowing up the system, especially over short-sighted grievances.