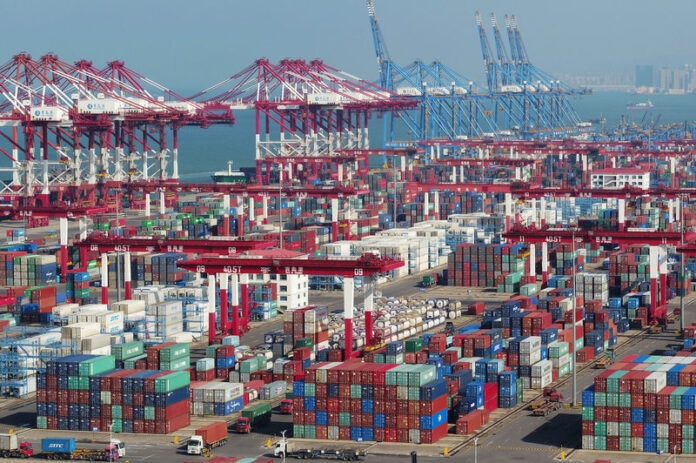 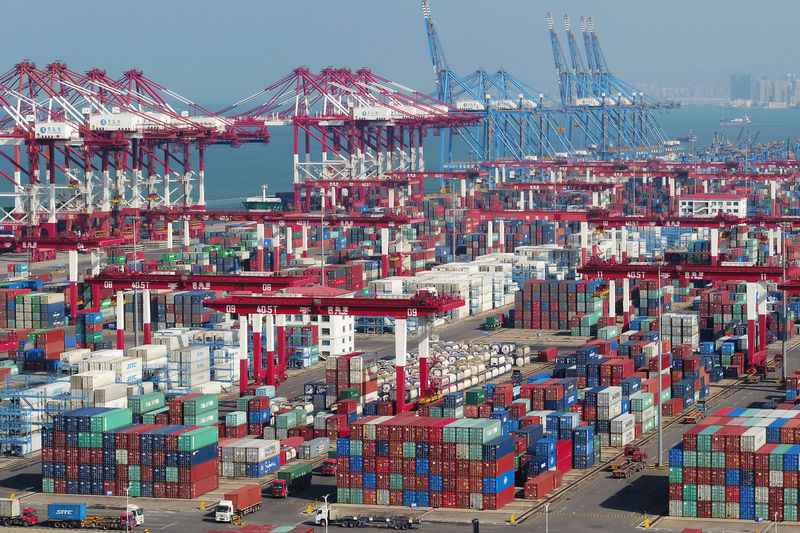 © Reuters. Containers and trucks are seen at a terminal of the Qingdao port in Shandong

BEIJING (Reuters) – China’s trade engine likely remained struck in reverse in January, with imports and exports expected to fall for the second month in a row, adding to concerns the economy may be at risk of a sharper slowdown.

China is the world’s largest trading nation, and the extent of the declines will be closely watched by international investors and policymakers as anxiety grows over cooling global demand.

Imports are expected to have fallen 10.0 percent in January from a year earlier, which would be the biggest decline since July 2016, according to the median estimate of 30 economists in a Reuters poll. That compared with a 7.6 percent drop in December.

“The weakness of imports suggests we should be alert to the possibility that China’s economy is slowing more abruptly than we had been expecting,” Mark Williams (NYSE:), chief Asia economist at Capital Economics, cautioned.

China’s exports in January also likely contracted, though not as much. Outbound shipments are expected to have fallen 3.2 percent from a year earlier, compared with the previous month’s 4.4 percent decline.

A new round of Sino-U.S. talks began in Beijing on Monday as the world’s two largest economies renewed efforts to defuse their bruising trade war. Negotiators are trying to reach a deal ahead of a March 1 deadline when U.S. tariffs on $200 billion worth of Chinese imports are scheduled to increase to 25 percent from 10 percent.

Most analysts believe a further suspension of the tariff hike will be the most likely outcome of the talks, with existing duties expected to be left largely intact for awhile longer, maintaining pressure on Chinese exporters while averting a strong near-term blow.

China’s overall trade surplus is seen to have shrunk sharply to $33.5 billion in January from $57.06 billion the previous month, according to the Reuters poll.

However, analysts warn that data from China in the first two months of the year must be treated with caution due to business distortions caused by the timing of the long Lunar New Year holidays, which fell in mid-February in 2018 but started on Feb. 4 this year.

Estimates for both January imports and exports thus fell in an unusually wide range.

Most of the poll respondents penciled in a contraction in imports for January, with the lowest forecast projecting a 20.1 percent drop.

China’s domestic demand had already been weakening before Washington and Beijing started to impose tit-for-tat tariffs on each other’s exports in early 2018.

A multi-year regulatory crackdown on risky lending practices and debt has pushed up business financing costs and throttled access to once-easy credit, hitting a vast swathe of private companies. Investment growth at one point hit a record low.

Many analysts said the contraction in Chinese imports has occurred mostly in the technology sector.

Taiwan and South Korea have been the hardest hit so far, given their large exposure to China and tech. Taiwan recorded a sharper drop of orders from China in December, while South Korea’s exports shrank for a second straight month in January as faltering demand in China hit prices of memory chips.

“Even if uncertainties about U.S. tariffs might have suppressed Chinese tech imports, supply-chain effects would explain no more than half (probably only 20 percent) of the recent fall in tech imports, with the rest mostly reflecting weak domestic demand,” economists at Goldman Sachs (NYSE:) said in a note.

Sharply weaker data ahead of an annual meeting of parliament in March could raise the possibility that Beijing may speed up or intensify its stimulus efforts, after a slew of measures last year that analysts said were modest by Chinese standards.

Policymakers have been fast-tracking infrastructure projects and cutting import tariffs to rekindle domestic demand, but the moves will take time to kick in and many analysts say the economy will not stabilize until the middle of this year.

Gross domestic product may grow 6 percent in the first quarter from a year earlier, according to a commentary in Economic Information Daily, slowing from 6.4 percent in the fourth quarter of 2018, which was the weakest pace since the global financial crisis.

Full-year GDP may expand around 6.3 percent, the state-controlled newspaper said on Monday.