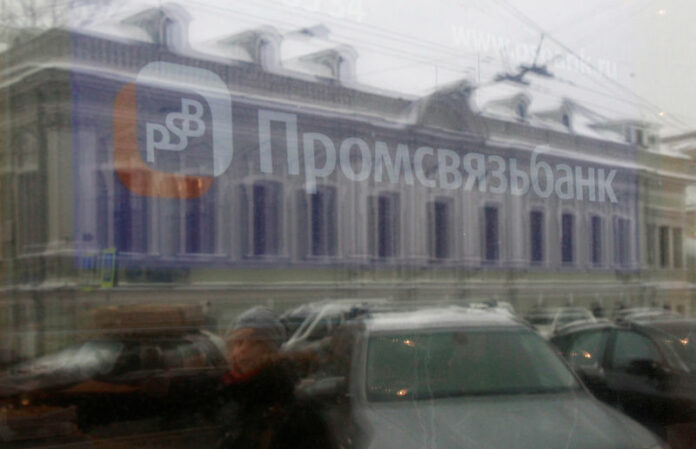 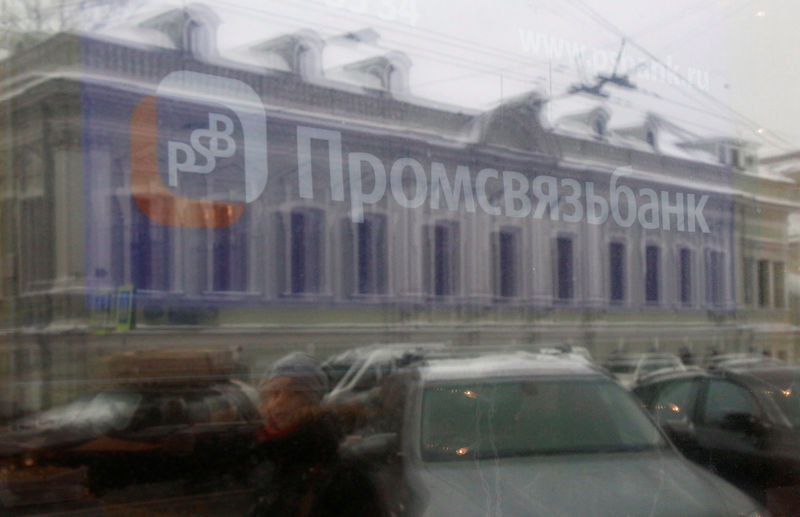 © Reuters. FILE PHOTO: People are reflected in a window of an office of Promsvyazbank in Moscow

By Tatiana Voronova and Darya Korsunskaya

MOSCOW (Reuters) – Russia will dramatically cut its estimate of the sum it expects to recover from a “bad bank” set up after the collapse of three major lenders, according to three sources familiar with new calculations being prepared for the central bank.

The central bank has spent over $40 billion bailing out Otkritie, B&N and Promsvyazbank since 2017. It had hoped to recover between 40 and 60 percent of the value of their 2 trillion rubles ($30.45 billion) assets that were transferred to Trust Bank, the bad bank, in the rescue deal.

But the central bank now expects to receive only 20 percent of the value, according to the calculations being put together by the managers of Trust Bank, the sources said. The estimate is being downgraded because the assets were overpriced in the initial calculations, they said.

The central bank is Trust Bank’s main shareholder. It hopes to recover the money through asset sales and loan repayments.

A Trust Bank spokeswoman told Reuters that the recovery rate was still being discussed. The central bank did not reply to a request for comment. It is not clear when the revision will be announced by the central bank.

“The real recovery rate will hardly exceed 20 percent. It will likely be lower,” said one of the sources, who is familiar with the central bank’s new calculations. “These assets were initially overpriced.”

A second source said he expected the recovery rate to be between 10 and 20 percent.

Central bank officials have already said publicly it was aware that most assets, which include real estate and agricultural loans, were overvalued when they were transferred to Trust Bank.

But a downward revision to the estimate could erode public trust in the central bank. It could also point to more weakness in the banking sector, suffering from the fallout of Western sanctions over Moscow’s annexation of Crimea from Ukraine in 2014 and the sharp fall in oil prices.

As part of the rescue of Russia’s three largest private lenders, the central bank split the assets into “good” and “bad”.

Most of the troubled assets from the three banks were transferred last year to Trust Bank, which was formerly part of the Otkritie banking group.

B&N and Otkritie’s healthy assets were merged and became FC Otkritie, which the central bank plans to sell in the next two to three years. Promsvyazbank kept its good assets and was repurposed as a bank for the defense sector.

Russian Direct Investment Fund, the country’s sovereign wealth fund, became a minority shareholder in the “bad bank,” with the goal of preparing its assets for sale.

The central bank had been aware of the assets’ overpricing when they were added to Trust Bank’s balance sheet, deputy governor Vasily Pozdyshev said.

“When these assets were added to the balance sheet, we immediately said that many of them had been overpriced by three or four times,” Interfax news agency quoted him as saying in December.

“We nonetheless added them to the balance sheet because it’s better to have assets, even overpriced, than not accepting anything on the balance.”

S&P 500, Dow Stage Another Turnaround as Fed Meeting Gets Underway

S&P 500, Dow Stage Another Turnaround as Fed Meeting Gets Underway