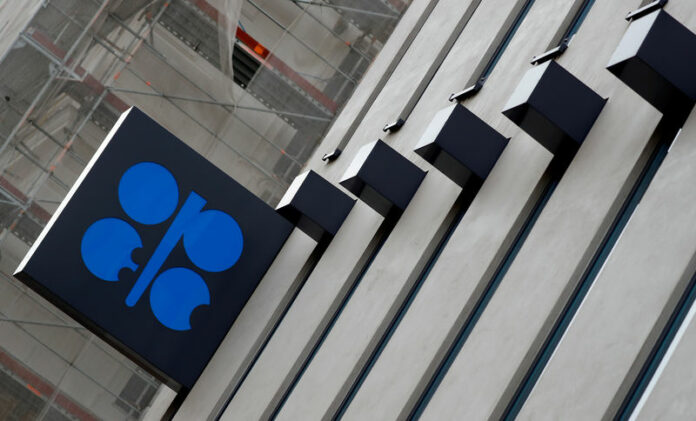 © Reuters. FILE PHOTO: The logo of the Organization of the Petroleum Exporting Countries (OPEC) is seen outside their headquarters in Vienna

LONDON (Reuters) – OPEC said on Tuesday it had cut oil production steeply under a global supply deal, although it flagged headwinds confronting its efforts to prevent a glut this year including weaker demand and higher rival output.

In a monthly report, OPEC said its oil output fell almost 800,000 barrels per day in January to 30.81 million bpd. That is still slightly more than the expected 2019 demand for OPEC crude, which the producer group lowered to 30.59 million bpd.

Worried by a drop in oil prices and rising supplies, the Organization of the Petroleum Exporting Countries and its allies including Russia agreed in December to return to supply cuts. OPEC is lowering output by 800,000 bpd from Jan. 1.

In the report, OPEC cut its forecast for 2019 world economic growth by 0.2 percentage point to 3.3 percent and highlighted a range of headwinds, including a slowdown in global trade.

“Some recent positive developments could support the global economy at its current level, including the recovery in oil prices, possible progress in U.S.-China trade negotiations and less-ambitious monetary tightening by the U.S. Federal Reserve,” OPEC said in the report.

“Nevertheless, this would not lift the global economy beyond the growth forecast.”

With the supply cut delivered in January, OPEC has achieved 86 percent compliance with pledged reductions, according to a Reuters calculation – a high rate by OPEC’s past standards.

This rate could rise in coming months as top exporter and OPEC kingpin Saudi Arabia voluntarily lowers supply by more than it agreed.

Saudi Arabia plans to pump around 9.8 million bpd in March, more than 500,000 bpd below its target under the deal, its energy minister told the Financial Times.