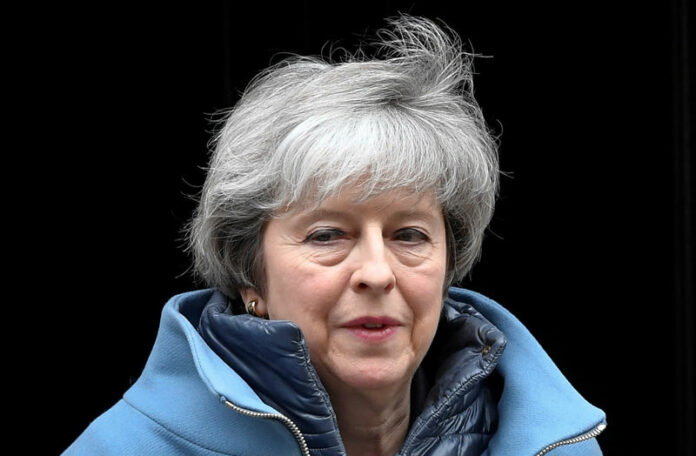 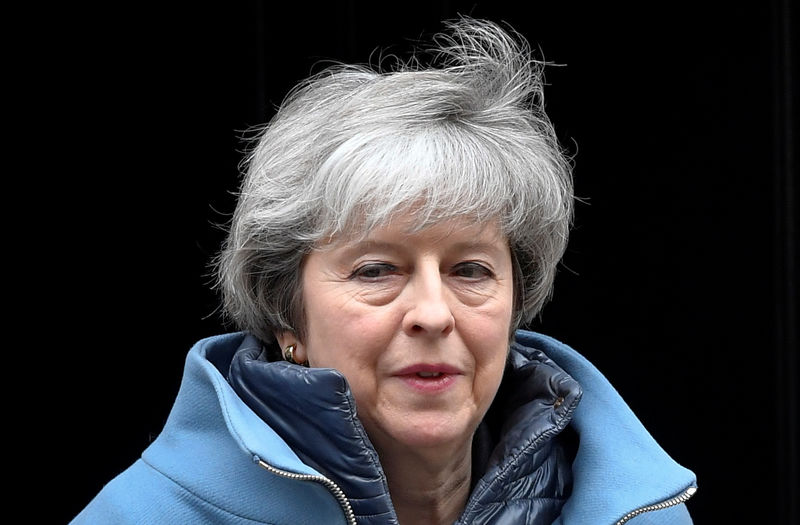 © Reuters. Britain’s Prime Minister Theresa May is seen outside Downing Street in London

By Kylie MacLellan and William James

LONDON (Reuters) – Prime Minister Theresa May told lawmakers on Tuesday to hold their nerve over Brexit and give her more time to negotiate a deal acceptable to both the European Union and the British parliament.

The United Kingdom is on course to leave the European Union on March 29 without a deal unless May can convince the bloc to amend the divorce deal she agreed last year and get it approved by British lawmakers.

“The talks are at a crucial stage,” May told parliament. “We now all need to hold our nerve to get the changes this House requires and deliver Brexit on time.”

The leader of the opposition Labour Party Jeremy Corbyn accused her of running down the clock with sham negotiations to pressure parliament into backing her deal.

British lawmakers rejected May’s withdrawal deal last month, with the major sticking point being the Irish ‘backstop’ – an insurance policy to prevent the return of a hard border between British province Northern Ireland and EU-member Ireland.

Critics say the policy could leave Britain subject to EU rules for years or even indefinitely after leaving the bloc.

The EU says the backstop is vital to avoiding the return of border controls in Ireland and has refused to reopen the Brexit divorce deal, though May insists she can get legally binding changes to replace the most contentious parts of the backstop.

“By getting the changes we need to the backstop; by protecting and enhancing workers’ rights and environmental protections; and by enhancing the role of parliament in the next phase of negotiations I believe we can reach a deal that this House can support,” May said.

The EU’s Brexit negotiator Michel Barnier said on Monday the bloc would agree to tweak the political declaration on EU-UK ties after Brexit that forms part of the package, to reflect a plan for a closer future relationship that could remove the need for the backstop.

May is pursuing three options in talks with Brussels: negotiating a way for Britain to leave the backstop without needing EU agreement, agreeing a time limit to the backstop, or finding an alternative arrangement that replaces it altogether.

RUNNING DOWN THE CLOCK?

Parliament is to hold a debate on Brexit on Feb. 14 but with just 45 days until Britain leaves the bloc it is not expected to change the course of the exit process, and no date has been set for another vote to approve or reject May’s deal.

May said if she had not yet reached a deal in Brussels, she would deliver another progress report on Feb. 26 and provide another chance for parliament to express its opinion on her approach the following day.

She said she was prepared to speed up other parts of the ratification process of the Brexit deal if time gets too tight to pass legislation before exit day – a move some interpreted as a sign she was willing to keep negotiating until the last moment.

Opponents of Brexit argue May is deliberately delaying so lawmakers will be faced with the option of backing her agreement or leaving without a deal, a disorderly exit that businesses fear will cause widespread damage to the economy and jobs.

“It appears the prime minister has just one real tactic: to run down the clock hoping Members of this House are blackmailed into supporting a deeply flawed deal,” Corbyn told parliament.

“This is an irresponsible act. She is playing for time and playing with people’s jobs, our economic security and the future of our industry.”

May, who delayed a vote on the deal in December when it was obvious parliament would reject it, responded to Corbyn by saying that she was not responsible for the delay, instead blaming parliament’s failure to back it.

“I wanted to have this sorted before Christmas, I brought a deal back… It’s not me who’s trying to run down the clock,” May said, drawing hoots and jeers from opposing lawmakers.

India Bullion: Up on MCX; gold on COMEX flat ahead of US data