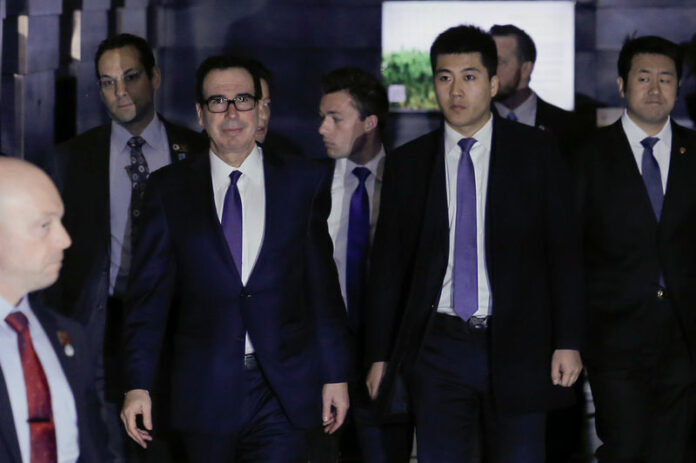 BEIJING (Reuters) – U.S. Treasury Secretary Steven Mnuchin said on Thursday he was “looking forward” to trade talks with China, as the two sides began high-level discussions in Beijing aimed at resolving a tariff war ahead of a March 1 deadline for a deal.

“Looking forward to discussions today,” Mnuchin told reporters without elaborating as he left his hotel.

U.S. tariffs on $200 billion worth of imports from China are scheduled to rise to 25 percent from 10 percent if the two sides don’t reach a deal by the deadline, increasing pressure and costs in sectors from consumer electronics to agriculture.

While advisers to U.S. President Donald Trump have described March 1 as a “hard deadline”, the president has said a delay was possible though he preferred not to do so. He told reporters on Wednesday that the negotiations had been progressing “very well”.

Trump has said he did not expect to meet with Xi prior to March 1, but White House Press Secretary Sarah Sanders has raised the possibility of a meeting between the leaders at the president’s personal retreat at Mar-a-Lago in Florida.

U.S. Department of Agriculture Deputy Secretary Stephen Censky said on Wednesday that the two presidents were expected to meet “sometime in March,” but no dates were set.

The Chinese government has offered few details about the state of negotiations this week.

But China has denied accusations of trade abuses. While Chinese officials have repeatedly pledged to improve market access for foreign investors, few experts expect Beijing to agree to anything that would force fundamental changes to what Washington complains is its state-led approach to trade.

China’s nationalist state-run Global Times tabloid said in an editorial late on Wednesday that though Washington had started the trade fight, it “was now more willing to reach an agreement”.

“China will never harm its fundamental interests. The policy has been tested by the trade war and we have seen the change in Washington’s attitude,” the paper said.