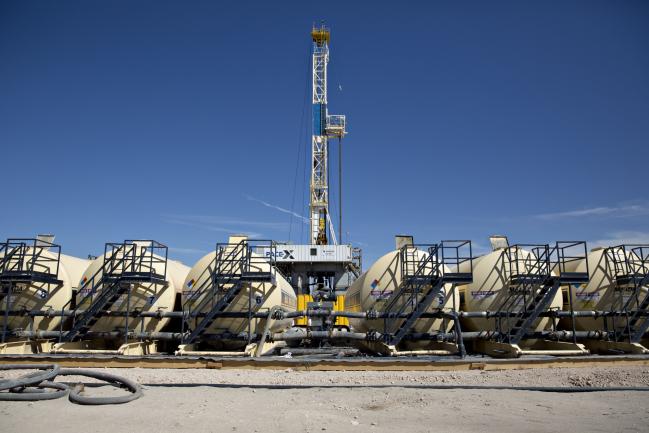 America’s Shale Boom Keeps Rolling Even as Wildcatters Save Cash

© Bloomberg. Tanks containing drilling fluid sit in a row near a Nabors Industries Ltd. rig drilling for Chevron Corp. in the Permian Basin near Midland, Texas, U.S., on Thursday, March 1, 2018. Chevron, the world’s third-largest publicly traded oil producer, is spending $3.3 billion this year in the Permian and an additional $1 billion in other shale basins. Its expansion will further bolster U.S. oil output, which already exceeds 10 million barrels a day, surpassing the record set in 1970. Photographer: Daniel Acker/Bloomberg

Almost all the independent producers have reduced their budgets for 2019, but many still expect to deliver double-digit growth in production this year, fourth-quarter earnings reports show. Growth is slowing but still strong: the U.S. will add about 1.45 million barrels of oil a day on average this year, down from 1.6 million in 2018, according to the Energy Information Administration.

“The machine still has enough cash available that it can continue to grow at a rate that’s material,” said Raoul LeBlanc, a Houston-based analyst at IHS Markit, said by phone. The rest of the world “is now not going to be flooded with oil, but still mildly glutted.”

The tumble in at the end of 2018, combined with investor demands for fiscal discipline, has prompted most shale executives to only invest what they earn in cash flow, ending years of debt-fueled growth. But the scale of past investments and low service costs mean that the cutbacks will only put a dent in growth projections.

On average, U.S. explorers have cut their capital budgets 4 percent but are predicting a 7 percent increase in production, according to RS Energy Group, a Calgary-based researcher.

The latest explorers to announce spending cuts and pledge more returns to investors were Concho Resources (NYSE:) Inc. and Devon Energy Corp (NYSE:). on Tuesday. Despite the budget trimming, Concho expects oil output to grow about 28 percent in 2019. Devon lifted oil production 14 percent in January, compared with the final three months of 2018, but foresees full-year output trailing the 2018 figure as divestitures take a bite.

The U.S. will likely pump a record 12.4 million barrels a day this year, 13 percent higher than in 2018, according to the EIA. Most of the growth will come from the Permian Basin of West Texas and New Mexico.