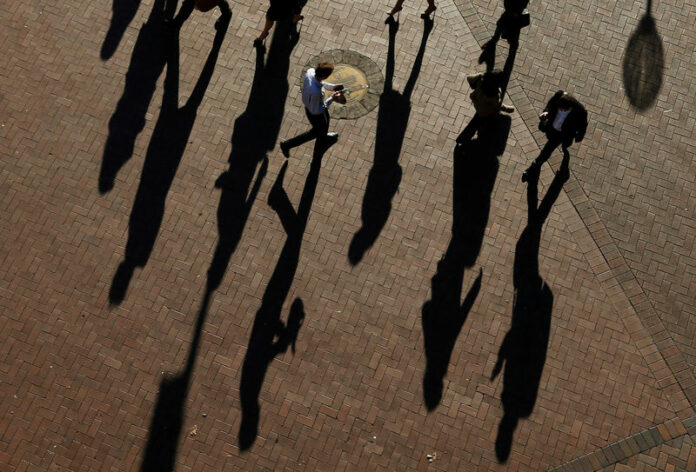 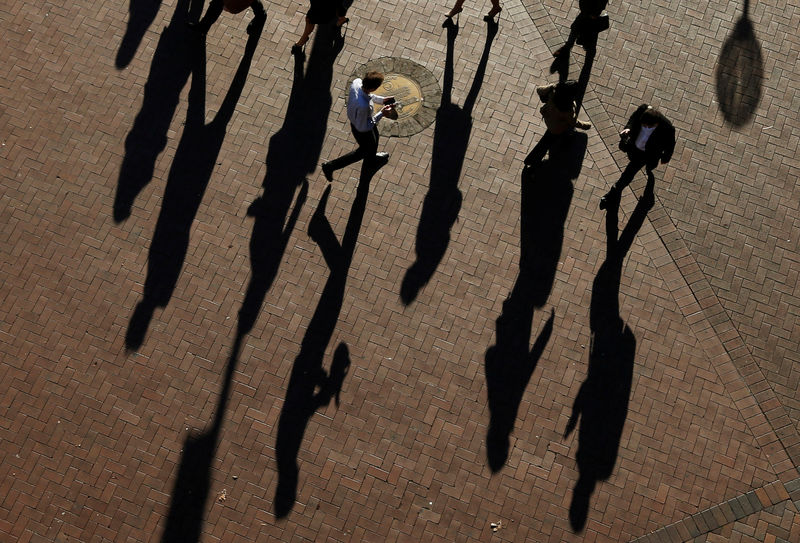 © Reuters. Commuters cast their shadows as they arrive at the Central Business District during the morning rush hour in Sydney

SYDNEY (Reuters) – Australia’s jobs growth surged past all expectations in January as firms took on more full-time staff while the jobless rate stayed at its lowest in seven years, barnstorming performance that will boost policymakers confidence in the economy.

A total 39,100 net new jobs were created in January, from a downwardly revised but still sturdy 16,900 in December and surpassing market forecasts for a 15,000 increase, according to the Australian Bureau of Statistics (ABS) report on Thursday.

The Australian dollar briefly jumped to a two-week top of $0.7208 and the futures market pared chances of a rate cut later this year.

Westpac chief economist Bill Evans, however, did point to January’s strong labor market outcome as a risk to his rate outlook.

The Reserve Bank of Australia (RBA), which has held rates at a record low 1.50 percent for 2-1/2 years, is counting on labor market strength for a long-awaited pick up in wage growth and inflation in the face of a downturn in the property market.

In recent public comments, RBA Deputy Governor Guy Debelle underlined the importance of the labor market for the economy.

“The main thing is to not lose your job,” Debelle said. “I say that in all seriousness.”

“Our main job is to make sure that the economy continues at a reasonable pace, with a low level of unemployment,” he added. “That’s going to be the thing which allows most people out there, who’ve got a mortgage, to continue to handle that mortgage.”

So far, the labor market is sticking to the RBA’s script with annual employment growth of 2.2 percent faster than the 1.6 percent rise in population.

The unemployment rate is at a 7-1/2-year trough of 5.0 percent. The only factor preventing a further decline in January was a rise in the participation rate to 65.7 percent. This means unemployment was steady even with an increase in the number of people looking for work.

A Reuters poll this week showed a median of 28 economists predicted rates at 1.50 percent through early 2021, a view that would find some support in Thursday’s numbers.

“A strong job market, combined with generational lows in interest rates, reduces the prospect of a broader economic slowdown caused by fall in Sydney and Melbourne home prices.”

Helping that confidence, leading indicators of labor demand continue to point to further employment growth in Australia in a positive sign for household spending.

An index of vacancies released by the department of jobs and small business last month showed there were 185,547 skilled job vacancies in December, the highest in 6-1/2 years.