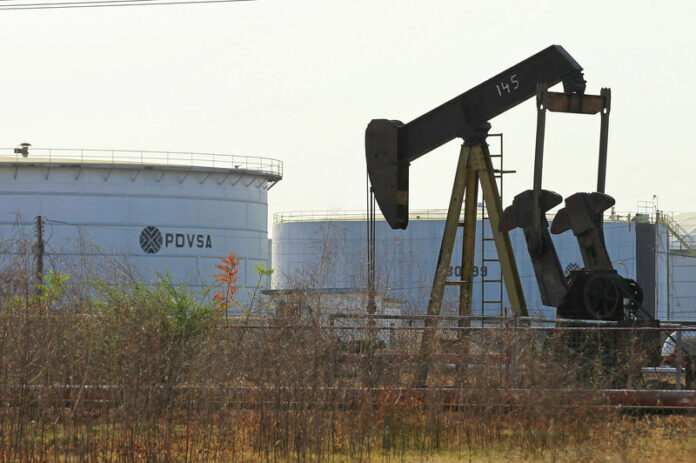 Venezuela gets fuel from Russia, Europe but the bill soars 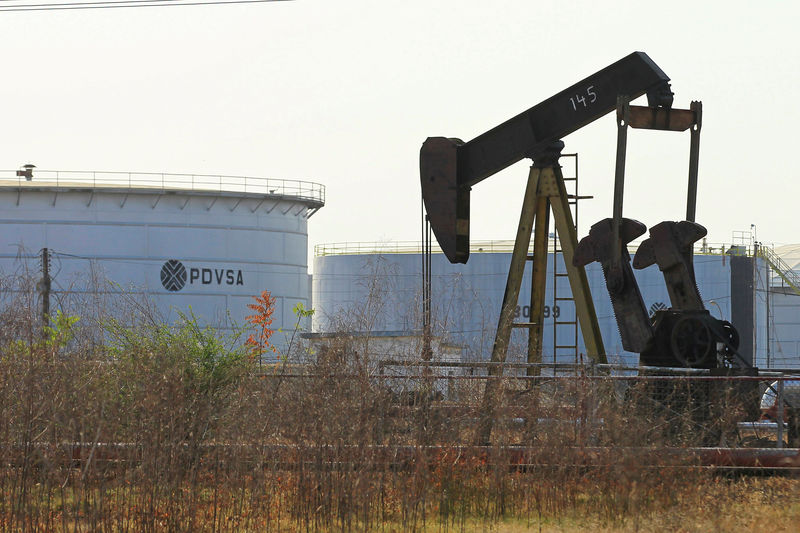 © Reuters. FILE PHOTO: An oil pumpjack and a tank with the corporate logo of state oil company PDVSA are seen in an oil facility in Lagunillas

MEXICO CITY/MOSCOW/LONDON (Reuters) – Venezuela is paying heavy premiums for fuel imports from Russia and Europe, with fewer than a dozen sellers seeing the risk as worth the reward after flows from the United States dried up because of sanctions, trading sources said and data showed.

The South American nation exports crude but its refineries are in poor condition – hence the need to import gasoline and diesel for petrol stations and power plants, as well as naphtha to dilute its heavy oil.

Russia has been a traditional political backer of Caracas, while India and Spain also have long-standing trade ties. But supplies even from those allies are coming at a cost.

“The prices they are charging us are horrifying,” said an executive at Venezuelan state-run oil firm PDVSA who is familiar with recent purchases.

The executive said the heavy premiums were partially due to the fact that single cargoes passed through several hands before reaching Venezuelan ports and also involved complex and expensive ship-to-ship transfers.

A trader involved in one fixture said shipowners were now charging a fee of up to 50 cents per barrel to Venezuela versus 15-20 cents before sanctions.

Last year, Venezuela imported most products from the United States with the main providers being PDVSA’s own U.S. subsidiary Citgo Petroleum and a U.S. unit of India’s Reliance.

Monthly supplies fluctuated but in December alone PDVSA imported almost 300,000 barrels per day (bpd) of fuel as its domestic refineries worked at just below a third of its 1.3-million-bpd capacity, according to PDVSA data.

Imports have fallen to some 140,000 bpd of gasoline, diesel, naphtha and other fuels since the end of January, Refinitiv Eikon data shows.

In addition, at least 13 cargoes carrying 5 million barrels of various fuels are heading to PDVSA’s terminals or waiting in Venezuelan waters to discharge, according to shipping sources and Eikon data.

However, the sanctions were later clarified, allowing U.S. persons to purchase and engage in swaps and non-cash deals for petroleum and petroleum products with PDVSA until April 28 in a move aimed at easing flows and averting a fuel crisis.

But even though the clarification meant Washington was still allowing fuel supplies to PDVSA, sellers have been scarce so far.

From Russia, Vitol and Trafigura are taking fuel from the ports of Ust-Luga and Taman to the Caribbean island of Aruba, where PDVSA’s unit Citgo operates an oil terminal, according to shipping sources and Refinitiv Eikon data.

Vitol is bringing 30,000 tonnes of Rosneft-produced gasoil in the Orient Challenge vessel, while Trafigura chartered the Elandra Fjord to ship 37,000 tonnes of gasoline produced by Russian oil firm Surgutneftegaz.

PDVSA, Rosneft and Reliance did not reply to requests for comment. Surgutneftegaz declined to comment. Vitol and Repsol said they fully complied with all legislation and sanctions.

“We continue to closely monitor events on a cargo-by-cargo basis,” a Repsol spokesman said.

Trafigura declined to comment. The trading house will stop business with PDVSA after completing a small number of already-concluded trades, sources have said.

PDVSA’s president Manuel Quevedo traveled to India last week to secure larger sales of Venezuelan oil to refiners as his country needs to divert up to 500,000 bpd of crude once bought by U.S. customers.

Executives from Rosneft have traveled to Venezuela in recent weeks for talks, industry sources said. Rosneft is a major lender to PDVSA and co-owns oil projects in the country.

Some Venezuelan petrol stations have been receiving insufficient fuel from PDVSA in recent weeks, so scarcity of supply has worsened in regions including the south of the country and the Andean states. Venezuela has so far, however, avoided a full-blown fuel crisis.