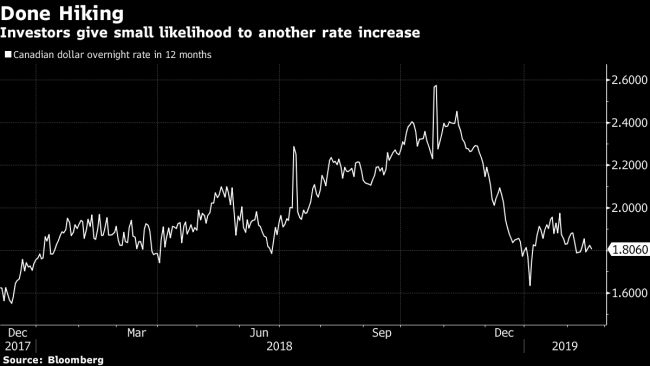 Will the Bank of Canada Buck Dovish Trend? Watch Poloz for Clues

(Bloomberg) — Bank of Canada Governor Stephen Poloz gives his last speech Thursday before next month’s rate decision, with investors looking for indications on whether he will follow the Federal Reserve toward a more dovish tilt on policy.

While Poloz has signaled he’s in no rush, he has stuck to messaging that more hikes will eventually be needed. That position is now considered more assertive than the Fed, which is signaling a firmer pause on policy action. Poloz is due to speak in Montreal at 1 p.m., with the text of his remarks released on the central bank’s website at 12:45 p.m.

At issue is how close the Bank of Canada believes it is to the peak of its tightening cycle, after it raised borrowing costs five times since mid-2017. At 1.75 percent, the benchmark overnight rate is below the central bank’s range of estimates for the neutral rate, at 2.5 percent to 3.5 percent. The neutral rate is the point where borrowing costs are believed to no longer be stimulative.

Swaps trading suggests investors see only a small chance of another rate hike coming from the Bank of Canada. That’s at odd with expectations from economists at major banks, where there’s almost unanimity that at least one more increase is likely at some point this year. The next rate decision is March 6.

The Bank of Canada’s outlook so far has been that the recent economic slowdown is only temporary, reflecting in part transitory production cuts in the oil sector. In January, it projected growth will rebound later this year closer to 2 percent, after dipping to below 1 percent annualized in the first three months of 2019.

Poloz sticking to that script on Thursday could embolden investor expectations, particularly given oil prices are showing signs of recovery.

While investor bets for rate hikes remained subdued in recent weeks, the stronger commodity outlook has helped to lift the Canadian dollar by 3.6 percent so far this year, the best performance among the 10 most heavily traded currencies.

The “broader messaging is expected to reinforce the Bank of Canada’s position — and ours — that Canada is presently in a soft patch,” Derek Holt, head of capital markets economics at Bank of Nova Scotia, said in a note to investors.

On the flip side, others worry Poloz may be uncomfortable being one of the few central bankers talking about rate hikes, many of whom have followed Fed Chairman Jerome Powell’s move toward more dovish positions.

“The fact that the Bank of Canada is -– relatively speaking –- the most hawkish developed market central bank makes us a bit nervous that there could be scope to further course correct expectations to the downside,” Ian Pollick, head of rates strategy at Canadian Imperial Bank of Commerce, said in a note to investors.