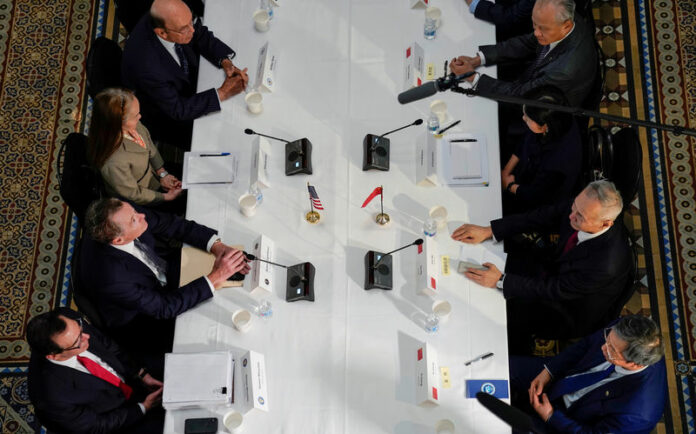 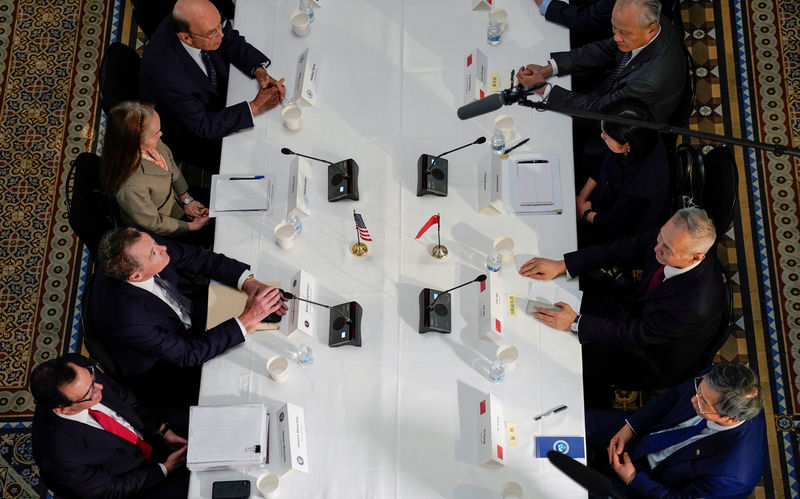 WASHINGTON (Reuters) – Top U.S. and Chinese trade negotiators met on Friday to wrap up a week of talks that have seen the two sides struggle to detail how to bridge deep differences on China’s role in global commerce.

If the two sides fail to reach a deal by midnight on March 1, then their seven-month trade war could escalate. U.S. President Donald Trump is scheduled to raise tariffs to 25 percent from 10 percent on $200 billion of Chinese imports into the United States.

Trump will meet with Chinese Vice Premier Liu He at the Oval Office later on Friday. The two also met at the end of talks during Liu’s last visit to Washington in late January.

A rise in tariffs would be a further blow to manufacturers struggling to deal with the disruption to their business model caused by tit-for-tat tariffs imposed in a trade war that has roiled markets and slowed global economic growth.Members of the Chinese negotiating team declined to comment on the states of the talks on Friday as they entered the offices of U.S. Trade Representative Robert Lighthizer for talks. Lighthizer and U.S. Treasury Secretary Steven Mnuchin are leading the talks for the American side.

Two members of the Chinese delegation, who did not give their names, told Reuters they did not know if talks would be extended beyond Friday. They are scheduled to leave for Beijing on Saturday, according to a member of staff at their hotel.

Reuters reported exclusively on Wednesday that the two sides are starting to sketch out an agreement on structural issues, drafting language for six memorandums of understanding on proposed Chinese reforms.

That marked the most progress the two sides have made toward a deal. But negotiators have struggled this week to agree on specific language within those memorandums to address tough U.S. demands for structural changes in China’s economy, sources familiar with the talks have told Reuters.

China has provided no details yet on how it would improve protections for the intellectual property of foreign companies operating in China, or end forced technology transfer, Ted McKinney, undersecretary for trade and foreign agricultural affairs at the U.S. Department of Agriculture, told reporters on the sidelines of an event.

Trump, who has demanded concessions from both allies and rivals on trade as part of his “America First” policy, has said the March 1 deadline could be extended if enough progress is made.

Chinese President Xi Jinping would need to undertake difficult reforms to meet U.S. demands. The United States is offering no real concessions in return, other than to remove the tariff barriers Trump has imposed to force change from China.

The issues under discussion include an enforcement mechanism to ensure that China complies with any agreements.

U.S. officials contend that China has previously failed to fulfill pledges to deal with American concerns on the issues at the center of the trade war. Trump’s administration wants to put a mechanism in place to prevent a repeat.

“We won’t fall into those same pitfalls,” U.S. Secretary of State Mike Pompeo said on Thursday in an interview on Fox Business Network.

“They have made commitments on cyber and other things which they have simply not honored. … If you talk to Ambassador Lighthizer or Secretary Mnuchin for even two minutes, they will tell you the heart of these discussions will surround the enforcement mechanisms,” Pompeo said. “… You can fool countries, you can fool people only for so long.”