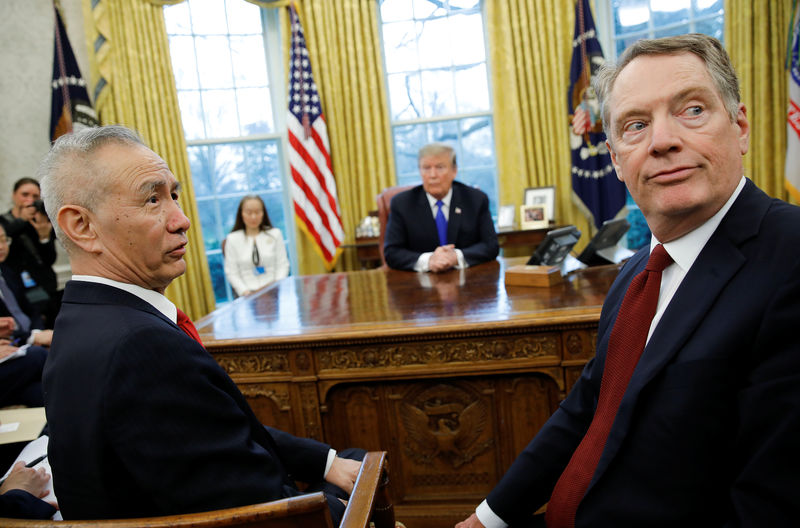 WASHINGTON (Reuters) – In trade talks between the United States and China, Memorandums of Understanding – the building blocks of what would be a historic deal – are officially out.

President Donald Trump, in an extraordinary dispute with U.S. Trade Representative Robert Lighthizer on Friday, dismissed the MOUs that have formed the outline of a potential trade pact as a waste of time, despite protests from his chief negotiator.

Sitting in the Oval Office across from Lighthizer and his Chinese counterpart in the trade talks, Vice Premier Liu He, Trump unloaded about his feelings on MOUs, which Reuters reported on Wednesday had been drawn up in six critical areas to form the outline of a broad deal.

“An MOU is a contract. It’s the way trade agreements are generally used … A Memorandum of Understanding is a binding agreement between two people,” Lighthizer said. “It’s a legal term, it’s a contract,” he said.

Trump was not satisfied. “By the way, I disagree,” he countered, addressing reporters as well as the Chinese delegation that has been negotiating the MOUs with the U.S. team. “I think that a Memorandum of Understanding is not a contract to the extent that we want. … We’re doing a Memorandum of Understanding that will be put into a final contract, I assume. But to me the final contract is really the thing, Bob, and I think you mean that too.”

Lighthizer, clearly not making traction in the back-and-forth with his boss, decided to go for a change in terminology.

“From now on we’re not using the word Memorandum of Understanding anymore. We’re going to use the term trade agreement, all right?” he said.

“OK,” the Chinese vice premier, sitting next to Lighthizer, responded.

“Assuming you decide on an agreement … it’ll be a trade agreement between the United States and China,” Lighthizer told the president.