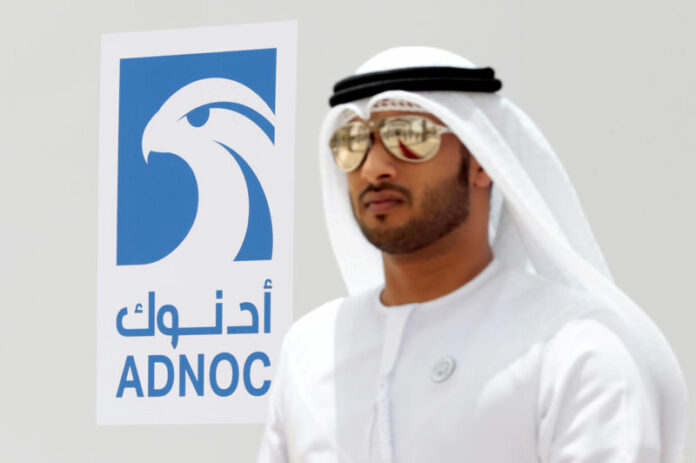 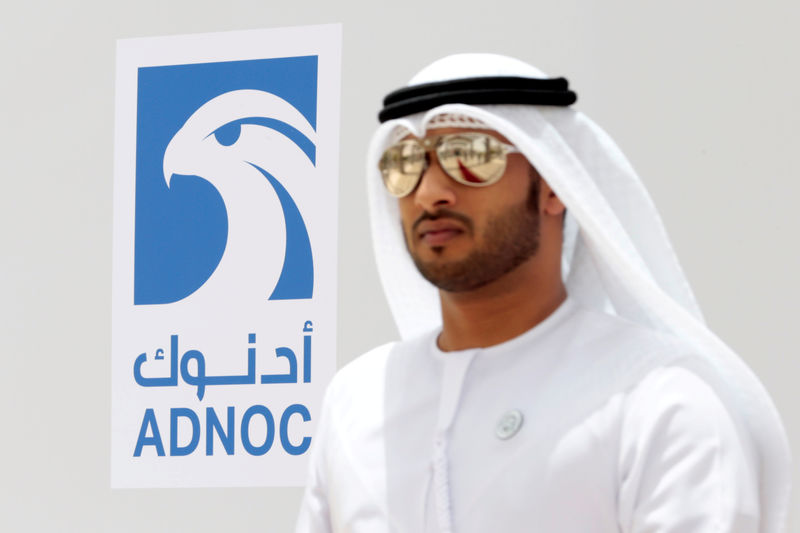 © Reuters. FILE PHOTO: An Emirati man is seen near the logo of ADNOC in Ruwais

ADNOC has been expanding through strategic partnerships since 2017. Last month it won a combined $5.8 billion investment from Italy’s Eni and Austria’s OMV for a stake in its refining business to establish a new trading operation owned by the three partners.

A new entity called ADNOC Oil Pipelines will lease the oil company’s interest in 18 pipelines, transporting and condensates across ADNOC’s upstream concessions for a 23-year period, ADNOC said in a statement.

The 18 pipelines have a total length of over 750 km and capacity of 13 million barrels per day.

Funds managed by KKR and BlackRock will form a consortium to hold a 40 percent stake in the entity, with ADNOC owning the rest. ADNOC will have sovereignty over the pipelines and management of pipeline operations.

The deal, expected to close in the third quarter of 2019, will result in upfront proceeds of some $4 billion to ADNOC.

The statement cited Sultan al-Jaber, ADNOC group CEO, as saying the deal validated ADNOC’s approach of “unlocking value from its portfolio of assets while retaining control over their ownership and operation”.

“We believe that today’s agreement among ADNOC, BlackRock and KKR will be followed by many more such partnerships to invest in the future growth of the region,” said BlackRock CEO Laurence Fink.

This is KKR’s first direct investment in the region, co-CEO Henry Kravis said, adding that there is substantial potential for more.

ADNOC has undergone major changes since al-Jaber’s appointment in 2016, embarking on privatization, oil trading and expanded partnerships with strategic investors.

“I think the approach taken here by ADNOC reflects a desire to monetize assets they have under their control,” said Edward Bell, director of commodities research at Emirates NBD.

“So I think it reflects an attempt to realize the value of the infrastructure they have in place more than a strategic shift into midstream oil and gas.”

ADNOC produces about 3 million barrels of oil and 10.5 billion cubic feet of raw gas a day.