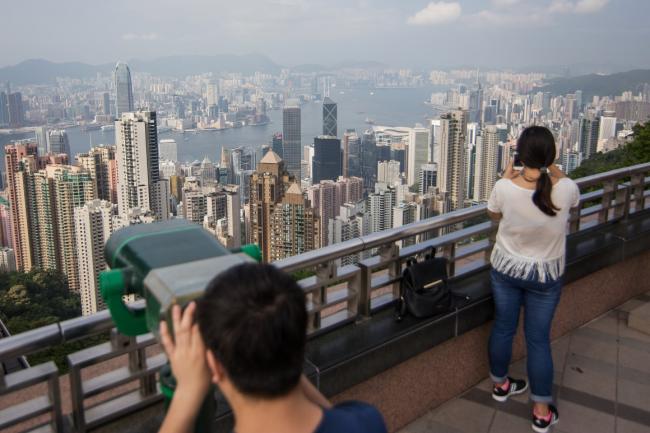 © Bloomberg. A tourist, left, uses binoculars to look at the view from Victoria Peak as commercial and residential buildings stand in the distance in Hong Kong, China, on Tuesday, April 28, 2015. Total visitors to Hong Kong, including those from China, fell 12.4 percent during the April 3 to 7 Ching Ming and Easter holidays, the government said, with Chief Executive Leung Chun-ying describing the decline as a

(Bloomberg) — Hong Kong’s economy is forecast to slow this year as the city grapples with weaker property values and the fallout from U.S.-China trade tensions, leading to a more modest range of budget handouts than last year.

The economy will grow by 2 percent to 3 percent, Hong Kong Financial Secretary Paul Chan said, after the 3 percent pace in 2018. For the final three months of 2018, GDP expanded 1.3 percent from a year earlier. Output contracted when compared with the third quarter.

“As a small and totally open economy, Hong Kong has been susceptible to economic headwinds over the past few months, as evidenced by notable slackening growth and diminishing confidence of enterprises in the future outlook,” Chan said according to a prepared statement online.

In his speech announcing the new budget, Chan emphasized caution on the outlook for the global economy and Hong Kong, while looking ahead to “enormous business opportunities in close proximity” to Hong Kong as a key cog in the Greater Bay Area development spearheaded by China.

Boosting Hong Kong’s stature in the competitive high-tech industry was an early area of focus for Chan’s budget, with funds ear-marked in various areas including:

On the tax front, Chan introduced a 75 percent reduction for salaries tax and tax under personal assessment up to a maximum of HK$20,000 for the year, benefiting an estimated 1.91 million taxpayers and reducing government revenue by HK$17 billion. That’s a lower cap than the HK$30,000 a year ago.

A few other handouts:

Chan is also expected to announce funding to revitalize the waterfront and public toilets, according to local media reports ahead of the budget.

(Updates throughout with more details.)