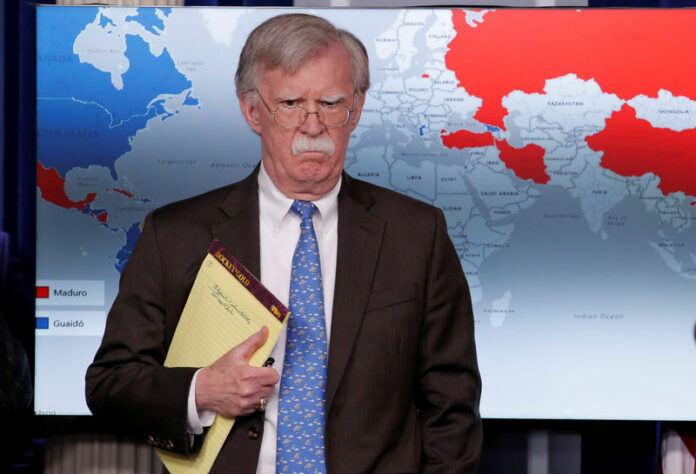 Move over ayatollahs: Bolton turns tweets and talons on Maduro 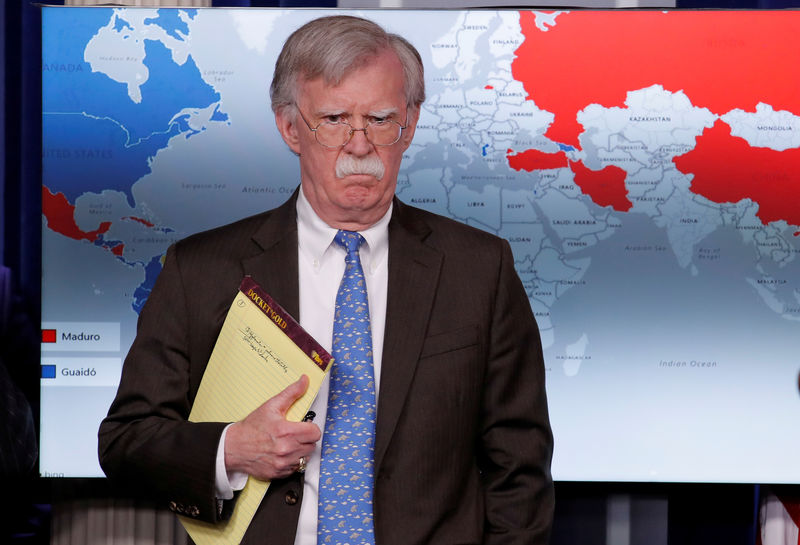 “Guantanamero … Maduro Guantanamero …,” Bolton sings in a caricature by Venezuelan cartoonist Fernando Pinilla – a play on both the well-known Cuban song, and the U.S. military detention center at Guantanamo Bay.

A mounted copy of the cartoon from Miami newspaper Diario Las Americas has joined the trophy wall in Bolton’s West Wing office, which until now has been dominated by mementos associated with his signature foreign policy fight: Iran.

One cartoon features an ayatollah hearing about Trump’s withdrawal from the Iran nuclear deal.

The new addition is a sign of how Bolton’s hawkish focus has zeroed in on a new target – getting Maduro to leave Venezuela. It’s a battle he has waged on Twitter, where his acid-tongued trolling of the socialist leader has made him one of the Trump administration’s fiercest voices on the issue.

The United States has led an international effort to recognize opposition leader Juan Guaido as the legitimate interim president of Venezuela, considering Maduro’s 2018 re-election a sham.

Since January, Bolton has fired off more than 130 withering missives directed at Maduro, accounting for three quarters of all his Twitter activity in that time and more than a third of all his tweets since Trump named him national security adviser in March 2018.

A spokesman for Bolton declined comment on the strategy.

Bolton, a veteran neoconservative who critics call a warmonger, has tweeted far more about Venezuela in his time as national security adviser than any other topic, including Iran (34 tweets) or the Middle East and Syria (29 tweets).

It was Bolton’s most viral Venezuela tweet that was the genesis for the cartoon that now graces his office.

“I wish Nicolas Maduro and his top advisors a long, quiet retirement, living on a nice beach somewhere far from Venezuela,” Bolton said, a zing that has since been retweeted 19,000 times and liked 39,000 times.

The next day, Bolton talked about the tweet with conservative radio host Hugh Hewitt, and added a threat: “The sooner he takes advantage of that, the sooner he’s likely to have a nice, quiet retirement on a pretty beach, rather than being in some other beach area like Guantanamo,” Bolton said.

In Caracas, Pinilla heard about Bolton’s warning and was inspired.

“It was easy to imagine that it would be the soundtrack of that arrest, which is our dream,” said Pinilla, who said he was surprised and honored when he learned from Reuters that his work was hanging on Bolton’s wall.

‘I DREAM OF BOLTON’

Bolton’s war of words has rankled his targets.

“What he’s trying to do here is give orders,” Arreaza complained to reporters.

“Bolton’s gangster-style language and threats are proof of the most sublime diplomatic practice. How regrettable that US foreign policy has fallen into the hands of such a gang,” Arreaza tweeted last week.

While Bolton has far fewer followers than Maduro – 543,000 to Maduro’s 3.5 million – Bolton has stronger stats on “engagement,” a measurement of how readers connect with a message, noted Matthias Luefkens, who produces an annual “Twiplomacy” study on how world leaders use Twitter.

“His language is very bold, very daring, direct. It’s not diplomatic language that he uses,” said Luefkens, who works for the public relations firm BCW Global in Geneva.

The strategy bypasses the time-sucking layers of approvals needed to release a traditional White House statement and also side-steps the media.

“It’s the Trump formula of avoiding the gatekeepers,” said Philip Seib, who writes about diplomacy and social media at the University of Southern (NYSE:) California’s School for Communication and Journalism.

Bolton’s brash style won fans in Caracas among supporters of opposition leader Guaido, like Martha Anez. She gushed about the mustachioed Trump adviser as she welcomed her friends to a crochet circle in her home in a well-to-do district earlier this month.

“I dream of Bolton!” Anez quipped. “The first thing I do in the morning, even before my coffee, is check whether or not the gringos have said they will intervene. Here we need a square in honor of Bolton! Because he has helped us,” she said.