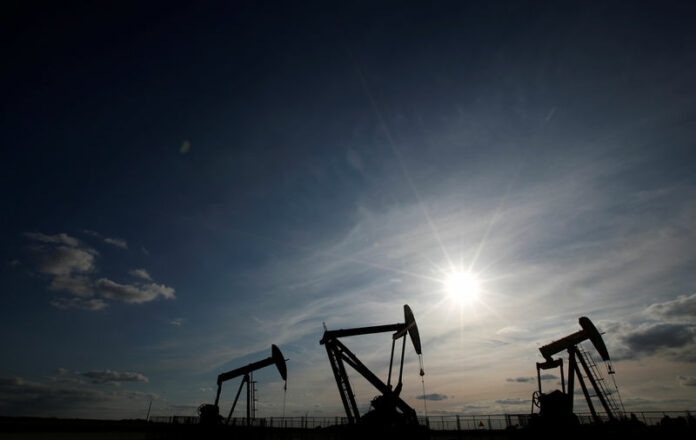 © Reuters. Oil pumps are seen at sunset outside Vaudoy-en-Brie

SINGAPORE (Reuters) – U.S. oil prices were firm on Thursday amid a fall in U.S. inventories and as OPEC cuts supply, but record output of 12.1 million barrels per day (bpd) prevented prices rising further.

U.S. West Texas Intermediate (WTI) crude oil futures were at $57.01 per barrel at 0034 GMT, up 7 cents from their last settlement.

Crude prices rose by around 2 percent the previous session.

“Crude oil prices rose sharply after data showed OPEC’s production cut agreement is having a big impact on imports and inventories in the U.S.,” ANZ bank said on Thursday.

“Crude imports into the U.S. fell 1.6 million bpd last week, to a two-decade low,” it added.

The lower imports are in part because of supply cuts by the Organization of the Petroleum Exporting Countries (OPEC), which together with some non-affiliated producers like Russia, known as OPEC+, agreed late last year to cut output by 1.2 million barrels bpd to prop up prices.

But the falling U.S. import needs are also a result of surging American crude oil production, which has risen by more than 2 million bpd over the last year, to an unprecedented 12.1 million bpd.