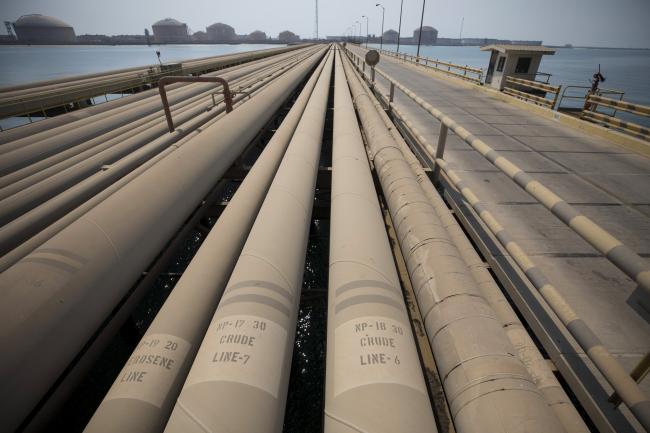 © Bloomberg. Signs for kerosene and crude oil sit on pipes used for landing and unloading crude and refined oil at the North Pier Terminal, operated by Saudi Aramco, in Ras Tanura, Saudi Arabia, on Monday, Oct. 1, 2018. Saudi Aramco aims to become a global refiner and chemical maker, seeking to profit from parts of the oil industry where demand is growing the fastest while also underpinning the kingdom’s economic diversification.

(Bloomberg) — Saudi Arabia sliced its crude supply to plants located on the U.S. Gulf Coast, the world’s largest refining center, by more than half from a year ago. And shipments may grind to a complete halt soon.

The Middle East’s largest producer is making good on its pledge to reduce deliveries to its biggest American customers in an effort to comply with OPEC’s deal to cut output. Saudi Aramco shipped just 1.6 million barrels of its oil to U.S. Gulf Coast buyers this month compared with 5.75 million a year ago, according to U.S. Customs data compiled by Bloomberg. In January, shipments were at 2.69 million last month,

“We could see Saudi oil imports declining to zero into the U.S. Gulf Coast,” said Andy Lipow, president of Lipow Oil Associates in Houston. U.S. President Donald Trump’s recent comment via Twitter that oil prices are too high won’t stem the current declining trend, as “OPEC and non-OPEC members feel prices are too low, and they will do what it takes to put the market back in balance.”

Government data showed Wednesday that total Saudi crude imports to the U.S dropped to 346,000 barrels a day last week, the lowest in data going back to 2010.

However, total Saudi oil flows to America won’t likely flatten out completely because there will be demand from U.S. West Coast refiners, who are faced with limited supply options, Lipow said.