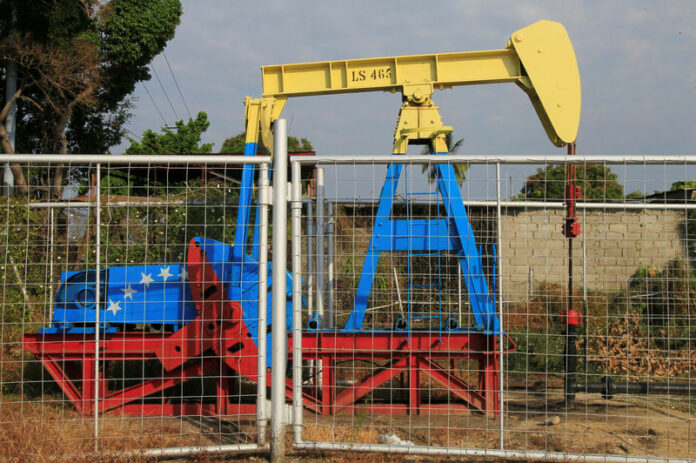 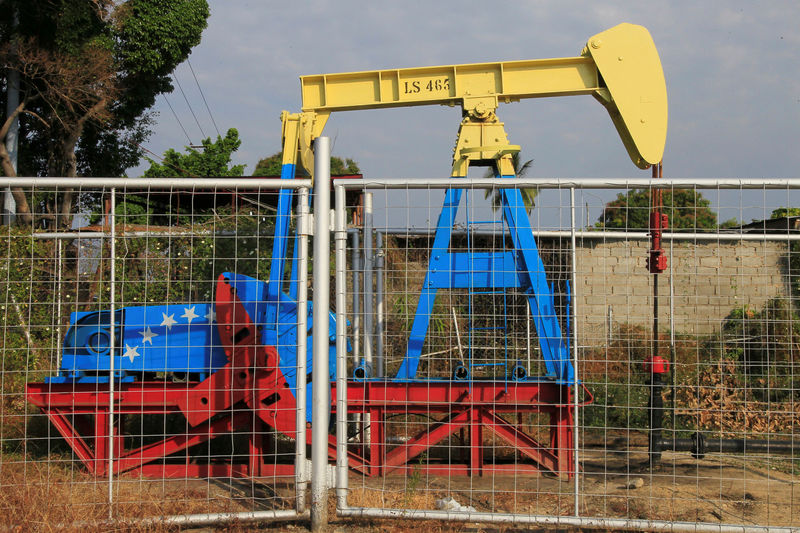 © Reuters. FILE PHOTO: An oil pumpjack painted with the colors of the Venezuelan flag is seen in Lagunillas

On Jan. 28, President Donald Trump’s administration barred U.S. customers from paying for Venezuelan oil until a new government being formed by the nation’s congress head Juan Guaido could be established to accept the proceeds.

Almost 70 percent of Venezuela’s oil shipments since Jan. 28 have gone to PDVSA’s clients in Asia, with India rising to first place among top destinations, followed by Singapore and China. Singapore is a hub for storage, trans-shipment and re-exports.

Europe, which imported a marginal volume of Venezuelan oil before sanctions, increased its share to 15 percent, followed by the United States with 11 percent and the Caribbean with 2 percent, according to the data.

“PDVSA (and) the whole nation has been under a brutal attack by the U.S. government to impact the company’s finances and operations,” Venezuelan Oil Minister Manuel Quevedo said on Thursday at a conference in Saudi Arabia.

PDVSA has ramped up crude-for-fuel swaps and exchanges with its customers and trading firms to keep oil flowing to foreign markets amid sanctions. The United States also established several wind-down periods, allowing pending deliveries and payments to be completed through April.

In March, at least 1 million bpd of Venezuelan crude and refined products are expected to be shipped, according to a Reuters review of tankers waiting to load or steaming to PDVSA’s ports.

After ordering some tankers carrying imported fuels to forcefully discharge amid uncertainty created by U.S. sanctions, PDVSA’s purchases of gasoline, diesel, diluent naphtha and other fuels have grown, satisfying most of the country’s consumption.

In the full month following sanctions, PDVSA imported 165,000 bpd of fuel, mainly from the United States and Europe. Sanctions banned U.S. exports of diluents used to convert Venezuela’s extra heavy oil into exportable grades, but allowed sales of other fuel for the coming months.

PDVSA on Thursday said it has enough fuel for domestic consumption and will create a special program to supply gasoline during the Carnival (NYSE:) holidays. It did not disclose figures.

Venezuela imported over 300,000 bpd of fuel in December, a record high amid problems with domestic refineries producing gasoline and other motor fuel. During 2018, the company imported around 200,000 bpd of fuel.

In recent weeks, the country has been paying heavy premiums for fuel purchased, mostly supplied by trading firms, Russia’s Rosneft, a traditional backer of Caracas, and Spain’s Repsol (MC:), which has continued swapping Venezuelan crude for gasoline under a deal signed before sanctions.